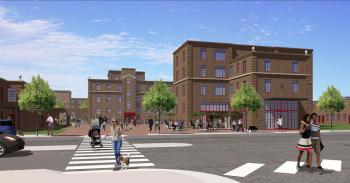 The north side Chicago Housing project, Lathrop Homes, was built in the 1930s at the intersection of Diversey Parkway, and Clybourn and Damen Avenues. Today, only 153 of its 925 units remain occupied, while city plans to redevelop the mostly fenced-off and boarded-up apartments have been in the works for years. Some members of the community have clashed with the city on those plans.

63-year old Miguel Suarez moved into his apartment in the summer of 1989; his mother and sisters lived around the corner.

“I could reminisce all day on what Lathrop looked like 30 years ago,” he said. “It was not only the community of complete diverse people. If you look down Hoyne from Diversey, there was a canopy of trees. Why they were taken down, it’s beyond my reasoning.”

Still in love with his home and views of the Chicago River, Suarez is working with other neighbors and community activists to convince the city to preserve more of the buildings.

“Hey, why move? I consider myself very comfortable where I'm at,” he said.

One of the developers chosen by the city, Jacques Sandberg of Related Midwest, admits moving forward with redevelopment plans for Lathrop hasn't been easy.

“I've been involved in this kind of work, community development and affordable housing, for all of my professional life and I've seen very complicated developments,” said Sandberg. “This is more complicated than any I've seen before. It's a fantastic site, everybody recognizes that, but we've got some competing interests and different ideas about the way it should be developed.” 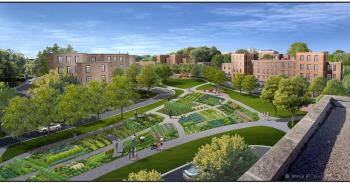 Among those competing interests are those who believe the historic buildings should be preserved as much as possible.

“It's a who's who of architects and landscape designers working on this great development in the late 1930s, during the Depression,” said Ward Miller of Preservation Chicago. “I'd really like to see all the buildings have a reinvestment in them. We're not looking for keeping it exactly like it is. I think we’d love to see an investment.”

And residents like Suarez and his neighbor Titus Kerby believe the homes should be returned to the low-income residents who once filled the units.

“If you look around us, this is already a mixed-income community,” said Kerby. “You have million dollar homes right up the street, you have gated communities. You have residents here paying up to $900 a month for rent in public housing.”

But Ald. Proco Joe Moreno (1st), who represents much of Lathrop, says that fight has already been lost.

Moreno advocates a mix of income levels, and especially increasing the number of homes for both affordable rental and purchase.

“There's a desperate need for that. To keep teachers, firemen, police officers, others in our community able to stay in the city. They have to live in the city based on their job,” he said. “Let's provide some incredible housing for them.” 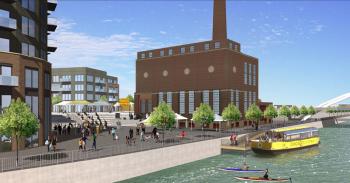 Plans -- which developers say are far from set in stone -- include preserving the historic buildings of the northern half of the project, but starting fresh with new buildings on the southern half.

“At the same time, we want to bring it into the 21st century, and offer new choices in housing types, mobility, ways to get around, walking, biking, share cars, green technologies, and building, and infrastructure,” said architect Doug Farr. “On one hand, it'll be like it was. And on the other hand, it'll be brand new.”

Developers say the green space -- now hidden beneath inches of snow -- on the northern half, along with its access to the river, deserves to be celebrated and shared with the community. The housing on the northern side will be modernized, and inviting to a mix of income levels.

“The challenge here is we've got rehabbed public housing buildings,” said Sandberg. “So how do you give an incentive for somebody who has an option to live anywhere essentially to move into a former public housing building? So we think that it's important to have a critical mass of unrestricted units, and to make this place really special.”

“I liken it to a jelly donut. Inside the jelly donut is the great reward, the sweet stuff. And so what we’ve got here at Lathrop is our open space. Our great lawn is inside a big block,” said Farr. “So we need to make that jelly donut filling so attractive to people that they will come from neighborhoods around here, and from this entire part of the city, to come and visit and feel part of Lathrop.”

Among the issues being debated are plans for a high-rise building on the southern end of Lathrop to increase the property's density to 1,200 units. But Ald. Scott Waguespack (32nd), whose district includes a small portion of Lathrop, sent a letter to the Chicago Housing Authority just last week, detailing why he opposes the "iconic tower" of an unspecified height, because it’s inappropriate relative to the surrounding community, rising costs of high rise construction, and the impact it might have on the amount of units at the site.

Urban planning experts warn that sometime the success of mixed income housing can be spotty. For now, a public process continues.

“We feel that the success of this site is going to be to bring it back as a vital, vibrant community to connect it to the surrounding neighborhood,” said Sandberg. “We think that turning this into a public park with improvements to the riverfront to draw people in; ultimately, it's not just going to be about the buildings. It really isn't ultimately about the buildings, it's about the people who live here and the people who live in the neighborhood.”

Developers hope building plans will be approved by the city this year for construction to begin in the next.

In a statement, the Chicago Housing Authority says the final plan for Lathrop Homes is still in its early stages, but that it will include input from residents, aldermen, housing advocates, preservationists and planning experts.

CHA also says the new plan will intend to make Lathrop a quality mixed-income community and a model for sustainable development while preserving its architectural heritage. 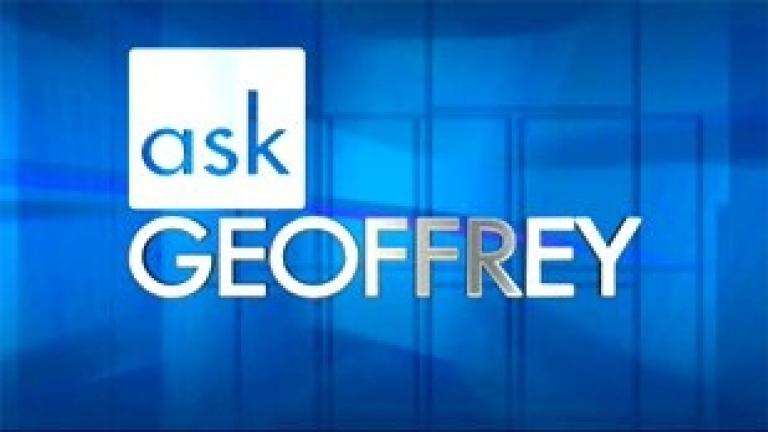