Misspelled signs are a common sight in Chi-RA-go. Geoffrey Baer shows us a few misspelled signs that have been around town for years in tonight’s Ask Geoffrey. Plus, who's responsible for the Skyway? And what's the history of oysters in Chicago?

There is an old fire station near Kedzie and Lake with an inscription on its stone cornice that reads "Fire Departement." Why the French spelling? 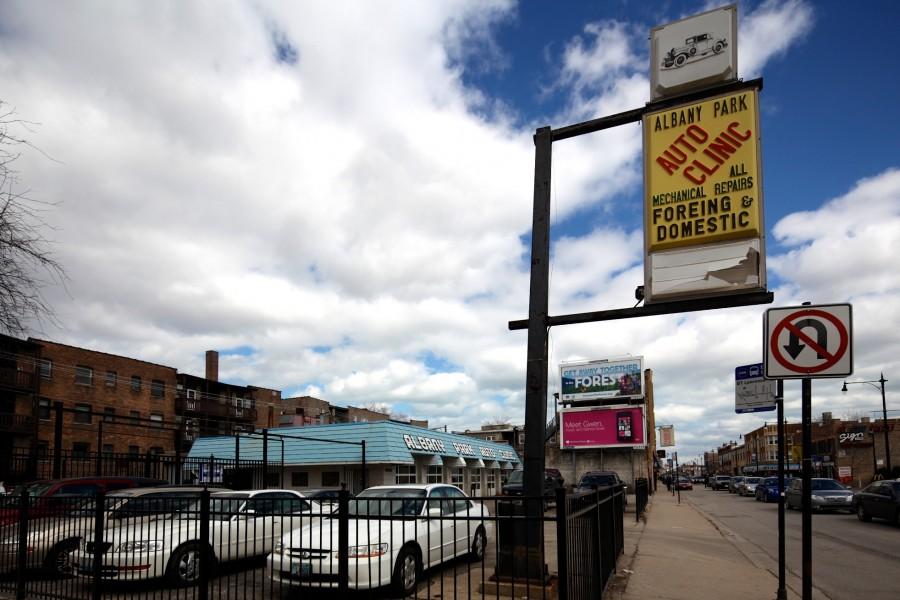 The stone carver was Belgian, and he spelled the word the way he knew it in French, according to authors Ken Little and John McNalis who wrote “A History of Chicago Firehouses.”

This inspired us to hunt for other misspelled signs, and we got a lot of help from Chicago Tonight viewers.

Brent Kampert from Crystal Lake pointed out another firehouse, Engine Company 98 on Chicago Avenue near the historic Water Tower. Its inscription appears to say “Chirago Fire Department,” and you can find a lot of commentary about this on the internet. If you compare what should be the lower case “c” in Chicago to the other two lower case “r’s” in the carving it’s clear that this is not intended to be an “r.”

Thomas Lee of Lake Forest found one on the walls of the Art Institute. Michelangelo is spelled as two words: “Michael Angelo.” Actually, his full name was Michelangelo (one word, and spelled differently than on the AIC wall) Buonarroti. We did find other examples of this alternate spelling, such as on an art museum in Sydney Australia. Henry Wadsworth Longfellow, the 19th Century English critic John Ruskin, also used this spelling.

This one comes from viewer John Morris: Look how the word “foreign” is spelled on the sign at the Albany Auto Clinic on Lawrence in Albany Park. The sign had been up there since the early 1970s. The shop owner told us he noticed the error right away, and the sign maker sent a corrected sign. Unfortunately, it was destroyed in a small fire in the back of the shop before it could be installed, so he just put up the misspelled one instead.  He says that it sparks a lot of conversation.

The Dairy Queen at Southport and Grace is promoting its proximity to Wrigley Field with a faux honorary street sign in tribute to Harry Caray, unfortunately misspelled CarEy instead of CarAy. Our viewer Lisa Galvin spotted this sign on the wall in a parking lot at Milwaukee Avenue and Sunnyside in the Portage Park neighborhood. She says it makes her smile every time she sees it.

Down in the far south suburb of Frankfort, Facebook friend Stephanie Kush pointed out the Frankfort Grainery tower. A place that stores and sells grain is actually called a granary. The Frankfort Historical Society says the owners deliberately misspelled the word so city folks unfamiliar with the term granary would understand the historic purpose of the landmark building. 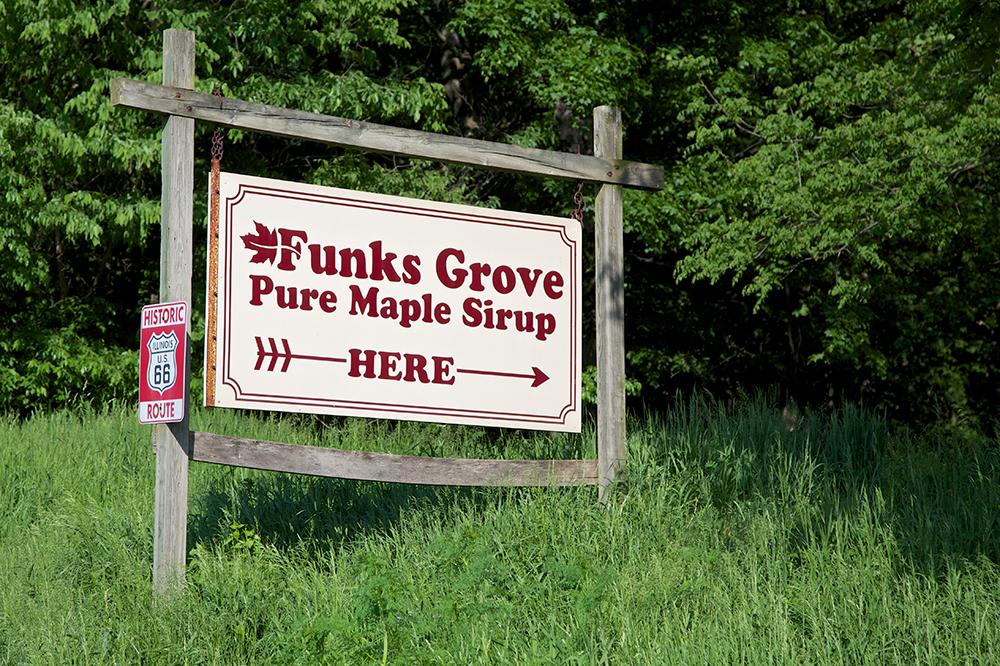 Going even farther afield, Route 66 fans know about Funks Grove Maple Sirup in downstate Illinois. In the 1920s, the owner of the business Hazel Funk Holmes insisted on the spelling which she said was the accurate term for a product boiled down from sap. She said syrup with a “y” referred to fruit juice with sugar added, like the syrup in canned peaches, so her descendants have continued the tradition in her honor.

Finally, we couldn’t resist this one. Back in September 2013, Bear’s defensive lineman Shea McClellin’s played the Minnesota Vikings with his name misspelled on his jersey. The Bears were wearing special “throwback” jerseys that day.  At least the Bears pulled out a last-second victory in that game.

I once heard you say Mayor Daley had the Skyway built. I thought Martin Kennelly planned it and it was already in the works when Daley took office. 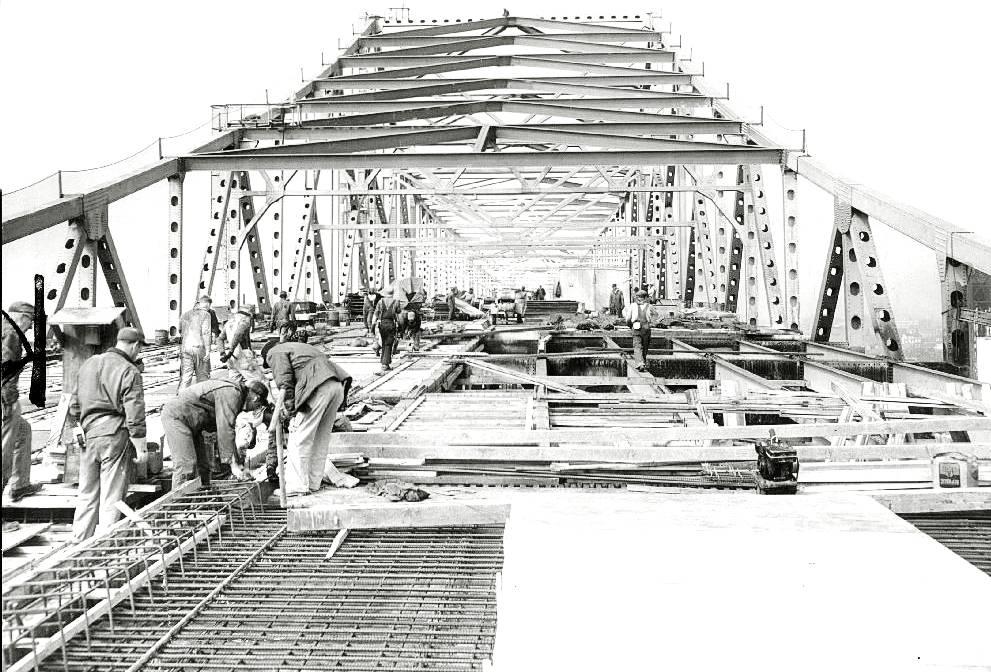 This viewer is correct! In fact, Mayor Richard J. Daley has traditionally gotten all the credit for many massive public works projects that were initiated by his predecessor Martin H. Kennelly. These projects include the Skyway, the expressway system, and even O’Hare Airport. 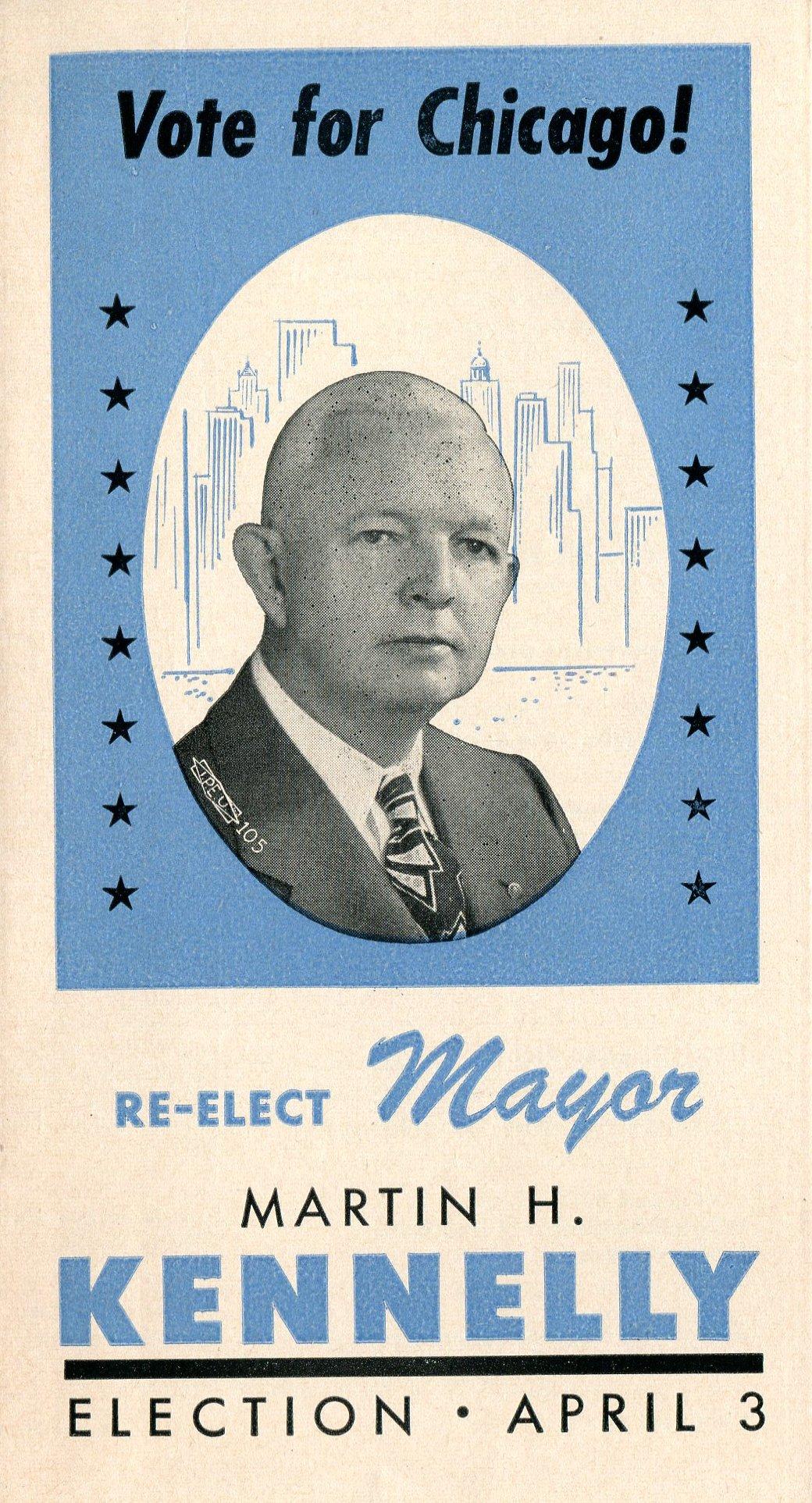 The Democratic Party drafted Martin Kennelly to run for mayor in 1947 because the party was in trouble. The incumbent Democratic mayor Ed Kelly was losing popularity because he was seen as both corrupt and progressive on racial issues. Kennelly was a squeaky-clean businessman who was also the popular chairman of the Red Cross in Chicago during WWII.

However, his orderly way of running government was not actually a good fit for Chicago’s rough and tumble political culture. Despite modernizing the police department, education system, and business practices of the city and launching all those big public works projects, he was characterized as both naïve and ineffectual. He was chided for his fondness for photo opportunities and cutting ribbons and his aversion to machine politics.

He also had terrible relations with the African-American community. He cracked down on jitney cabs and the illegal numbers racket in the Black community, but didn’t put forth many programs to advance the needs of African-Americans. The powerful African-American congressman William Dawson helped Democratic Party chairman Richard J. Daley push Kennelly aside in 1955.

Daley said “Kennelly has failed in every way.”

Daley went on to cast himself as the master builder of Chicago, in part by taking much of the credit for the big projects started under Kennelly’s administration.

I’ve read that the first oyster in Chicago was served at the Lake House Hotel in 1836.  I’d love to know more about oysters in early Chicago. 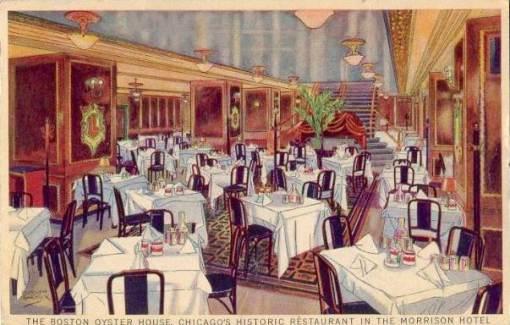 Various sources say that the Lake House hotel served the first oyster in Chicago in 1835 or 1837. This is pretty remarkable considering oysters had to be transported here from the East Coast and no railroads had come to Chicago yet. This was just a muddy frontier town of about 4,000 people back then.

At that point, travel from New York to Chicago took two weeks or more using the newly opened Erie Canal and transferring to a ship on the Great Lakes. Luckily, because the shell is filled with water when it’s closed, oysters can live for more than a week out of water. The oysters were packed in barrels with wet sawdust or eel grass. 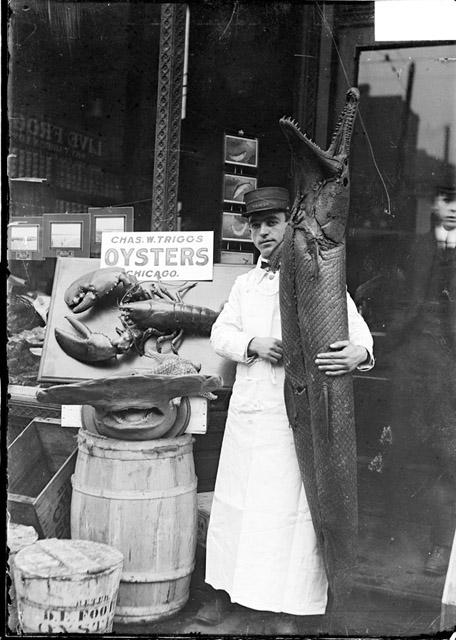 Bessie Louise Pierce wrote in her respected history of Chicago that the first shipment of oysters arrived in 1837 by sleigh from New Haven, Connecticut. That would have taken six weeks or more. Oysters can survive longer in cold weather, but a marine biologist at the Shedd Aquarium told us six weeks would really be a stretch. Once railroad service was extended to Chicago from the East Coast in the 1850s, shipping time was reduced to a matter of days and the oyster business really took off.

There were many high class oyster houses. One of the most famous was Rector’s at Clark and Monroe. Charles Rector served them at the 1893 World’s Fair.

Oysters also became bar food for working men. Oyster saloons offered a free oyster with each drink.  Just like peanuts it was hoped that the salty fare would encourage more wetting of whistles.

The heyday of the oyster in Chicago lasted from the 1850s to the 1890s.The craze faded by the 1920s, partly due to fears of getting sick from raw oysters and partly because of overfishing.

In recent decades oysters have made a big comeback in Chicago.