What's the story behind the "most bizarre building" in Chicago? What's happened to the Illinois Trust and Savings Bank building? Why did beautiful bronze reliefs at a Hyde Park church create an artistic controversy? Geoffrey Baer answers this question and more in this week’s edition of Ask Geoffrey.

Have you ever heard of something called the “kiosk sphinx?” 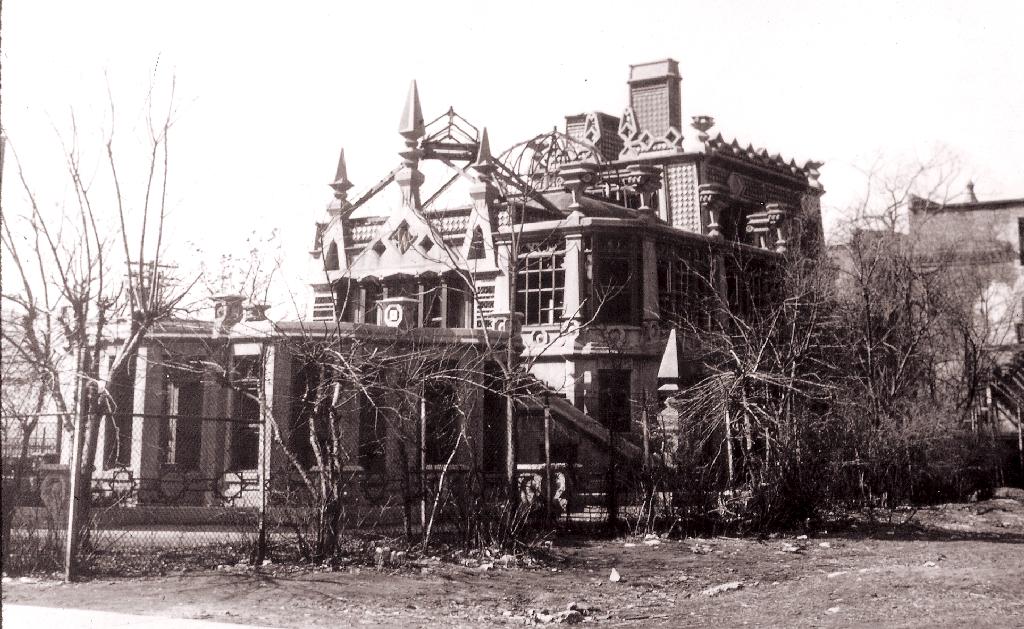 Chicago historian Tim Samuelson told us, and I quote, “It would be a pretty safe bet to say that the Kiosk Sphinx was the most bizarre building ever built in Chicago.” Tim called it a private museum and party palace on the south side, on Oakenwald near 40th.

The most prominent feature was a 15 story steel observation tower with a stone base, easily seen from Lake Shore Drive. The tower was supposed to have been entirely covered in stone with a huge illuminated glass sphinx at the top, but it was never finished. Kiosk is a term from the Ottoman Empire for a freestanding garden pavilion, so this was to be a sphinx on top of a towering kiosk.

The house was described in the Tribune as a “Rococo combination of spires, domes, and ornate staircases.” There were grottos, glass-floored terraces, secret passages, and theme rooms filled with the owner’s collection of art treasures and antiques.

The owner was an eccentric Chicago millionaire named Washington Porter Jr. who had the house built to his specifications. Porter had inherited his fortune from his father, who devised the first successful technology for shipping fruit long distances by train without spoilage.

Below is a great photo of Washington Porter Senior in the top hat, with Washington Jr. as a young boy carrying the riding crop on the left. 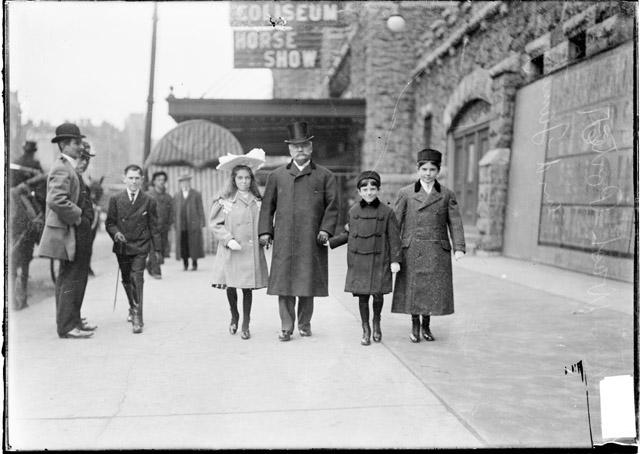 After Porter Junior spent much of his inherited wealth on the Kiosk Sphinx, he stopped paying his bills and eventually lost the property in the 1940s.

An old friend of the family named Mrs. Logan, who was afraid the art collection would be lost, bought the kiosk sphinx.  Porter claimed she had agreed to take care of it until he got back on his feet. But she kicked him out and put the property up for sale.

About a year later Porter gathered up some friends and raided the house, kicking out Mrs. Logan’s people. According to Samuelson he barricaded himself inside with a chef. An exasperated judge ordered Porter to get a job and see a psychiatrist.

Instead Porter fled to California, and the house became, in Samuelson’s words, “a spectacular ruin,” and it was demolished 1957. Porter died in the 1980s, and his ashes were scattered in Lake Michigan.

I read an article about the Illinois Trust and Savings Bank located at Jackson and LaSalle, but the bank there today seems to be a different building. 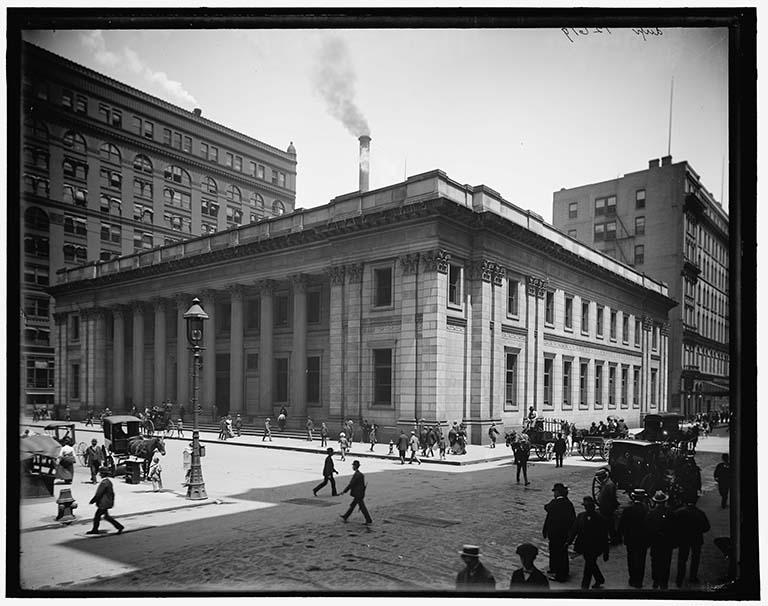 The Illinois Trust and Savings Bank at LaSalle and Jackson was torn down in 1924 and replaced by Continental Bank, now Bank of America.

The old Illinois Trust and Savings Bank building was most famous not for banking but for being the site of one of America’s first commercial aviation disasters.

The bank was founded in 1873, two years after the Chicago Fire. By the time it moved into this new building in 1897 at LaSalle and Jackson it was in the top ten banks in the country in assets.

The building looked like a classical temple with huge Corinthian columns. It was designed by D.H. Burnham and Company. This was four years after Chicago World’s Fair of 1893, which Burnham had conceived in a grand neo-classical style. After the Fair neo-classicism became wildly popular all over the country.

The spectacular interior of the Illinois Trust and Saving Bank had a huge rotunda with a glass skylight and teller cages around its perimeter. Bank employees worked at desks in the center below the skylight.

That skylight is a significant fact in the aviation disaster that occurred on July 21st, 1919.

The bank was closed, but about 150 clerks, mostly female, were still at their desks in the rotunda.  Suddenly a huge shadow passed across the floor.  Seconds later a flaming Goodyear Blimp came crashing through the skylight. 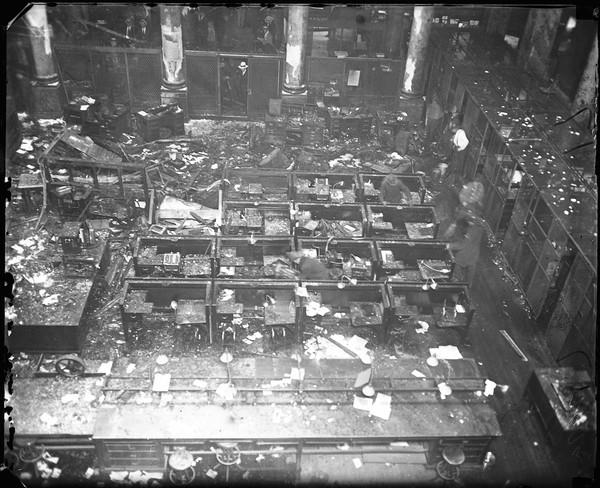 The interior of the building after the crash

The hydrogen-filled airship was on its maiden day of service. It had taken off from Grant Park and was on its way to the White City Amusement Park on the south side when it caught fire over the Loop. After it crashed to the floor of the rotunda, the gasoline tanks burst into flames killing nine bank employees and injuring 28 others.

The pilot of the blimp survived. He realized there was no hope and parachuted to safety along with another crewmember.  Three others aboard the blimp perished.

After the crash City Council prohibited flammable gas airships from flying over populated areas of the city. The bank was repaired and reopened, but it was torn down five years later.

I toured a Cape Cod church that had a sculpture of St. Francis.  The docent told me the same artist has work at a Chicago church. What church is this?

Faggi's Stations of the Cross

The church is St. Thomas the Apostle in Hyde Park. The Stations of the Cross at the church are by Italian-born Chicago artist Alfeo Faggi. For those who may not know, the Stations of the Cross are found on the walls of most Catholic churches and some Protestant denominations as well. They are a series of scenes depicting events along Jesus’s final walk, bearing the cross to his crucifixion.

Faggi’s very modern bronze relief sculptures fit with the overall design of St. Thomas the Apostle, which is considered the first truly modern Catholic Church. They were funded by the wealthy heiress and radical lefty Frances Crane Lillie.

The non-realistic representations of Jesus and other biblical characters and scenes created an awkward problem for the monsignor of the church:  He wanted to keep Mrs. Lillie happy, but some conservative parishioners and church leaders strongly objected to them. 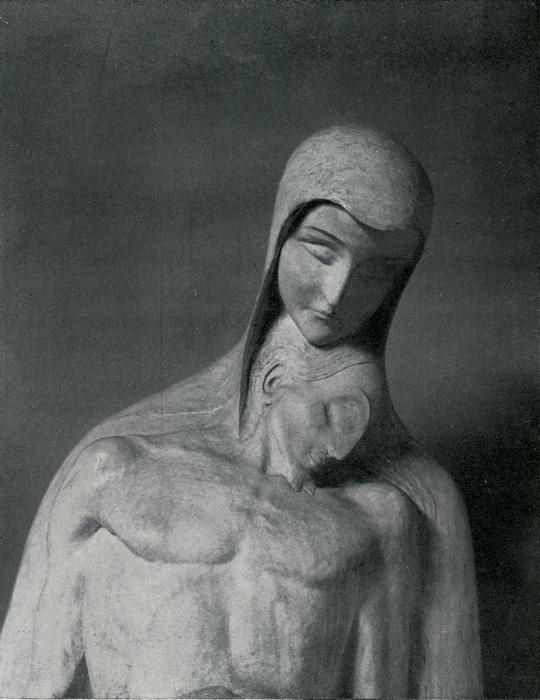 Faggi's Pieta The monsignor ultimately won the cardinal’s blessing with a letter writing campaign arguing that the Stations were important works of art.

In an oral history, Faggi said of those who disapproved or didn’t understand his work, “Those people are dumb, no brain at all - no visual brain - nothing there. Anyhow, it didn't make any difference to me, and I never asked any sympathy from anybody.”

Faggi’s life-size pieta from 1916 is also at St. Thomas the Apostle. A pieta is a figure of Mary holding the lifeless body of her son.

Faggi was the son of a fresco painter. He came to the U.S from Florence at age 28 in 1913 and died in 1966. He was inspired by Michelangelo’s notion that an artist should represent things not as they are but as they should be.