A. Scott Berg on "Wilson"

He was a polarizing and enigmatic president, not unlike the man who would succeed him 100 years later. We talk with A. Scott Berg, the Pulitzer Prize-winning author of a new biography of President Woodrow Wilson. Read an excerpt from Chapter 1 of Wilson and view a slideshow.

"So then after the Lord had spoken vnto them, he was receiued vp into heauen and sate on the right hand of God."
--Mark, XVI:19 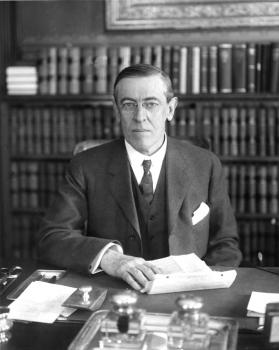 Dawn broke that day on a new epoch, one that would carry the name of a man whose ideas and ideals would extend well into the next century.

Shortly after seven o’clock on Wednesday, December 4, 1918, the sun rose over Hoboken, just as the nine-car special train of the twenty-eighth President of the United States chugged its way through the New Jersey city that fronted the western piers of  New York Harbor. One thousand soldiers and a Marine Corps guard of honor joined the local police in restraining the hundreds who  stood in the chilly first light in hopes of catching a glimpse of the illustrious passenger. They wanted nothing more, wrote one observer, than “to cheer the president and to wish him God-speed on his momentous voyage.”  At last, the flag-draped locomotive sputtered to a halt so that its central car—named “Ideal”—stopped before a red carpet leading to Pier 4. A battalion of the 13th United States Infantry surrounded the train.

The passengers remained on board until eight o’clock, at which time President Woodrow Wilson and his second wife, Edith, stepped off the train, prompting a rousing  rendition of “The Star-Spangled Banner” from an Army band. Brigadier General G. H. McManus, commander of the Port of Embarkation, stepped forward to welcome his Commander in Chief. In the last eighteen months, McManus’s port had witnessed the deployment of two million “doughboys” (as American soldiers were called) who had gone off to fight “the Hun” and win the first truly global war in history. General John J. Pershing, who had led the American Expeditionary Force, had rallied his armies from the outset with the vow that they would be in “Heaven, Hell or Hoboken” by Christmas of 1917.

A year later than Pershing had promised, President Wilson tipped his hat and greeted the surrounding soldiers and sailors before proceeding through a huge shed, which was lined with three hundred Army Transport Service girls in khaki and infantrymen bearing fixed bayonets. Hundreds of flags, those of the United States and the Allied nations—Great Britain, France, Belgium, and Italy most recognizable among them--hung from the ceiling of the great hall. Wilson walked beneath the glorious array and onto his home for the next ten days, the United States steamship George Washington. On December 4, 1917, that same ship had transported her first five thousand troops to fight in the war "over there." Now the great vessel was about to convey President Wilson and his team of aides and experts on a voyage of peace to Europe--not only to conclude what had been the greatest conflagration in the history of man but also to create a document that might guarantee that they had just fought “the war to end all wars.”

As the President and Mrs. Wilson ascended the gangplank, the naval band on board struck up “Hail to the Chief,” after which it reprised the National Anthem. Then the Wilsons settled into their flower-filled accommodations. The President’s suite consisted of a green-curtained bedroom and bath and a large office, with a mahogany desk on which sat a white telephone for shipboard calls; attached to a wall was a wireless telephone by  which the President could communicate with Washington or the Pennsylvania, the lead escort ship.  Mrs. Wilson’s bedroom was decorated in ivory with a pink bedspread, curtains, and plump cushions, connecting to a  large bath, a dining room large enough to seat six comfortably, and a sitting room with writing desk, chairs, and table. It was all to her liking, except for the soldiers outside their staterooms and patrolling the decks. 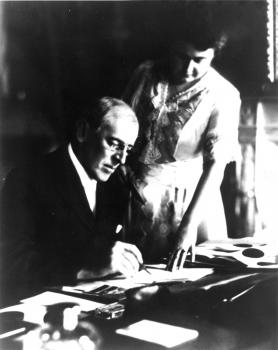 Never in history had so much security surrounded an American president. In addition to the military presence, eight members of the Secret Service  were aboard the George Washington, with two more doing advance work in France. The ship, recalled agent Edmund Starling, “had been checked from bow to stern and from keel to masthead, and members of the Secret Service all over the United States had been busy investigating members of the crew….There was not a fireman or cabin boy whose family and background had not been thoroughly looked into." The hopes of the world were on board, and everything was being done to ensure the safety of the transport.

At 10:15 the twin-stacked ship--722 feet long and weighing 25,000 tons--backed into the Hudson River. Once its stern was sighted heading northward, a cacophony rent the air. All the vessels in the waters around the New York islands responded with bells and sirens and horns and whistles, as passengers on every craft jockeyed for  rail position in order to wish Woodrow Wilson a bon voyage.

Wearing a bearskin coat, the President and his wife joined Captain  Edward McCauley, Jr. on the bridge. Wilson waved his hands and raised his hat to the crowds again and again in appreciation of the most spectacular send-off in New York history. It was difficult to imagine in that moment of purely joyful noise, with thousands of flags and handkerchiefs waving in his honor, that he was one of the most polarizing Presidents in the nation’s history. As one of his earliest supporters, Oklahoma Senator Thomas Pryor Gore, once said: "Wilson had no friends, only slaves and enemies."

British Parliamentarian Cecil Harmsworth would later observe that he did not know of “any historic personage…who so strangely attracts and repels” as Woodrow Wilson. This was possibly because—as another Wilson acquaintance observed—“probably in the history of the whole world there has been no great man, of whom so much has been written, but of whom personally so little has been correctly known.” Yet another, who, as a college student, had first encountered him, never lost sight of the personal paradox that was the man: “Stern and impassive, yet emotional; calm and patient, yet quick-tempered and impulsive; forgetful of those who had served him, yet devoted to many who had rendered but minor service…precise and business-like, and yet, upon occasion, illogical without more reason than intuition itself.”

Theodore Roosevelt, the greatest political personality of the day, took potshots at Wilson at every possible opportunity; and during the 1912 Presidential campaign—which he lost to Wilson—advisers urged Roosevelt to smear his opponent with the rumors of an extramarital affair with a mysterious woman known as "Mrs. Peck." TR refused, fearing that would only give Wilson some allure--as he looked like nothing more than "an apothecary’s clerk.” In this matter, however, TR’s political assessment was mistaken. For all the dour photographs of the very proper President, society doyenne Evalyn Walsh McLean  insisted that the women of America found him extremely attractive, which made him the subject of much giddy Washington gossip. For his part, Wilson admitted his susceptibility “to all feminine attractions,” as “girls of all degrees of beauty and grace have a charm for me which almost amounts to a spell.” He was, by his own admission, extremely sexual, always aware of "the riotous element in my blood." Beneath his stern ministerial appearance, churned a turbulent emotional life. 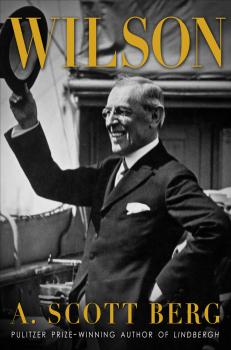 In wooing his first wife, he and the ethereal Ellen Axson of Rome, Georgia, indulged in one of the most expansive  love correspondences in history--thousands of letters so passionate she said they kept her “in an almost constant state of intoxication.” Cultured, well-read, and a talented artist, she abandoned any professional aspirations in order to serve her husband and raise their three daughters. She enabled his ambitions—all the way to the White House, in which she got to live only fourteen months before dying there. Bereft beyond words, he contemplated resignation.

But the war had just broken out in Europe, and what duty could not arouse in him, a friend did, by introducing him to a buxom, well-to-do, young Washington widow named Edith Bolling Galt. The President fell in love at first sight. Despite the political and practical difficulties of courting from the White House, the President romanced her, again through sheaves of letters and private meetings.  Less than eighteen months after burying the first Mrs. Wilson, he married the second. She worshipped him. And from that day forward—in health and unexpectedly grave sickness--she almost never left his side. Unwittingly, she would later enter into a conspiracy that ran the government and which would result in an amendment to the Constitution to prevent such an occurrence from happening again. Throughout their marriage, she monitored a twitch in his lower left eyelid and a throbbing in his cheek.

Despite numerous chronic ailments—and a bad cold as he boarded ship-- sixty-one-year-old Woodrow Wilson appeared remarkably fit. He stood five feet, ten and one-half inches and weighed a lean 170 pounds.  Except for some youthful experimentation with mustaches and sideburns, he had always been clean-shaven, with strong cheekbones and a prominent chin; he had a fine straight nose, and ears large enough to make some look twice. His hair had thinned, but he always retained enough to cut close and part neatly on the left. Although his vision was weak—one eye virtually useless--his deep gray eyes were as understanding as they could be piercing. A pince-nez, which emphasized his erudition, became his trademark. That and a J-shaped jaw  were all a caricaturist needed to conjure  the man. He had a well-defined mouth, with full lips; and though the public mostly saw a solemn face, he had a toothy smile and deep laugh, one generally reserved for intimate occasions. He told corny jokes, could not resist a pun, and always had a limerick at the ready--the raciest of which was about "an old monk from Siberia" who "eloped with the Mother Superior." He loved to sing, showing off his silvery  second tenor voice. One adviser wrote, “I never knew a man whose general appearance changed so much from hour to hour." His demeanor could change as well. “He seems to do his best to offend rather than to please, and yet when one gets access to him, there is no more charming man in all the world than Woodrow Wilson."

More than the elegant profile and courtly mien contributed to Wilson’s authoritative stature. Diplomat and historian George F. Kennan—who closely observed public figures through most of his 101 years--noted, "No man in modern times, to my mind, ever better looked or acted the part of an American president.” Read more from Chapter 1 here.