Dan Parizek is a “Honeybee Rescuer." If you’ve got a beehive in the walls of your home, Dan will relocate it so it won’t be destroyed by an exterminator. With Colony Collapse Disorder destroying some 10 million beehives since 2007, Dan and others say we can’t afford to lose any more hives. 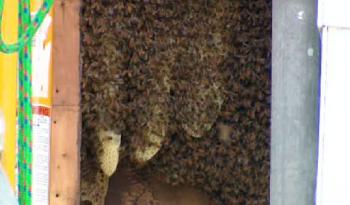 When we caught up with Dan, he was saving a beehive behind the walls of an Oak Park house.

“I've been a beekeeper for about 10 years," said Dan. "I was a carpenter, and a friend of mine knew I was a beekeeper. It turned out he had bees in his house."

So Dan helped his friend rescue the hive. He did it as a favor, but he says he got hooked.

“It's pretty messy work, but I seem to like it,” he said.

Keeping a watchful eye was the building's manager, who heard about the bees from an allergic tenant.

“When we started looking at it, and we started watching the amount of bees going in and out, we realized it was more than just a couple,” said Ingo Schaefer. “And, so then after contacting Dan, he came out and he used an infrared camera, and it's huge.” 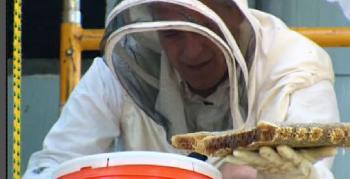 Dan agreed to let me join him up on the scaffold. I had a Tyvek suit and a helmet with netting, but I noticed Dan was less protected. He was wearing shorts. Dan says, on occasion, the bees do fly up his legs.

To get a front row seat on this operation, cameraman Tom Siegel attached a GoPro camera to my helmet.

When we got up there, I saw that Dan had already removed the siding and revealed the hive. But it was just a fraction of it.

Next, Dan begins to vacuum the bees. He’s created his own beehive vacuum cleaner. It's low-powered so it doesn't damage them. And inside there’s a removable bee cage. 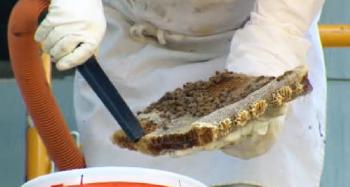 Once a section of the hive is bee-free, Dan cuts off some of the comb, revealing many more bees to be vacuumed up.

The honey-filled comb is also being relocated.

But here's something I never knew: not all the comb is filled with honey. There are also baby bees growing in there.

“The reason they're all bunched up here is, they're trying to keep this warm because there's some eggs and larva there. Can you see those there? Those are actually larva,” said Dan.

To give the eggs and larva the best chance of survival, Dan needs to store them at the same temperature and humidity as the hive. So he very carefully puts that part of the comb into a homemade incubator.

Dan does about 40 beehive removals a year. You can also hire an exterminator to come out and kill the hive, though even some exterminators now recommend relocation. Dan says there are reasons why you don't want to exterminate.

“Aside from the fact that you've got 50,000 dead bees in your house that are going to start to stink, if it gets too hot, the honey will actually break loose and start to run down your walls and end up in your living room or wherever,” he said.

But aside from avoiding a homeowner headache, Dan says there's another reason: with bee numbers dwindling, we need these bees. And these bees, he says, are particularly valuable because they're wild.

“Genetically, in theory, these bees are superior to the ones that you buy from a package dealer because they're acclimated to this area,” said Dan. 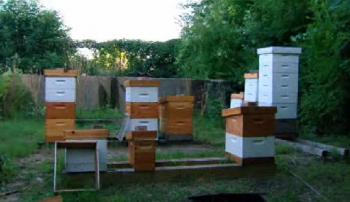 It took Dan several hours to painstakingly remove the entire hive. Then, he carefully cleaned the wood to guarantee that ants or other bugs won't come after the honey, and the remaining bees from the hive won't try to move back in. Then, he closed up the wall and down came a cage full of bees from inside the vacuum.

Two cages and 50,000 bees are about to make the transition to a new hive and new territory.

The transition begins in Dan's cabinet-making workshop. It's also where he will transfer the egg-filled honeycomb to its new home.

“The idea is to gently fit it in here,” he said.

Dan's workshop is in a huge old Chicago industrial complex. It's a long walk to his collection of beehives, known as an apiary. And you'd never find it. It’s all fenced in and camouflaged.

Dan's apiary has 24 hives, and all of them are relocated wild beehives. I asked if the bees will remember that this is their hive when Dan reassembles the pieces into his own hives.

“They'll be disoriented as far as where the sun is. I mean, that's how they navigate. Then, they'll be back to normal,” said Dan. “These are their bees. Those bees have been raising these bees, the ones that are captured. So, they're not going to desert these bees.” 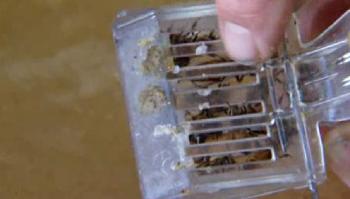 The likelihood of success is improved by the fact that Dan has found and protected the queen.

Relocating beehives is a business for Dan Parizek. But spend any time with him and you can tell that he is genuinely passionate about bees, and deeply concerned about bee colonies dying off and the impact that could have on us.

“If I rescue 40 hives in a year and I'm just one guy, I mean that's huge to me. I think that's a big difference,” he said. “That's kind of why I do it. I'm just trying to do the right thing, trying to help the bees along.”

And at the moment, the bees need all the help they can get.