Most of us haven't learned about sex and reproduction since high school sex-ed. But those classes probably weren't able to answer why so many sperm are needed to fertilize one egg. Or why female primates menstruate and other mammals don't. And how the size of the birth canal affects the development of the fetus.

The book How We Do It: The Evolution and Future of Human Reproduction explores the science of sex and childbirth. Author Robert Martin is the Curator of Biological Anthropology at the Field Museum and a member of the Committee on Evolutionary Biology at the University of Chicago. He joins us on Chicago Tonight at 7:00 pm.

Read an excerpt from Chapter 6: Feeding Babies: A Natural History of Breast-feeding: 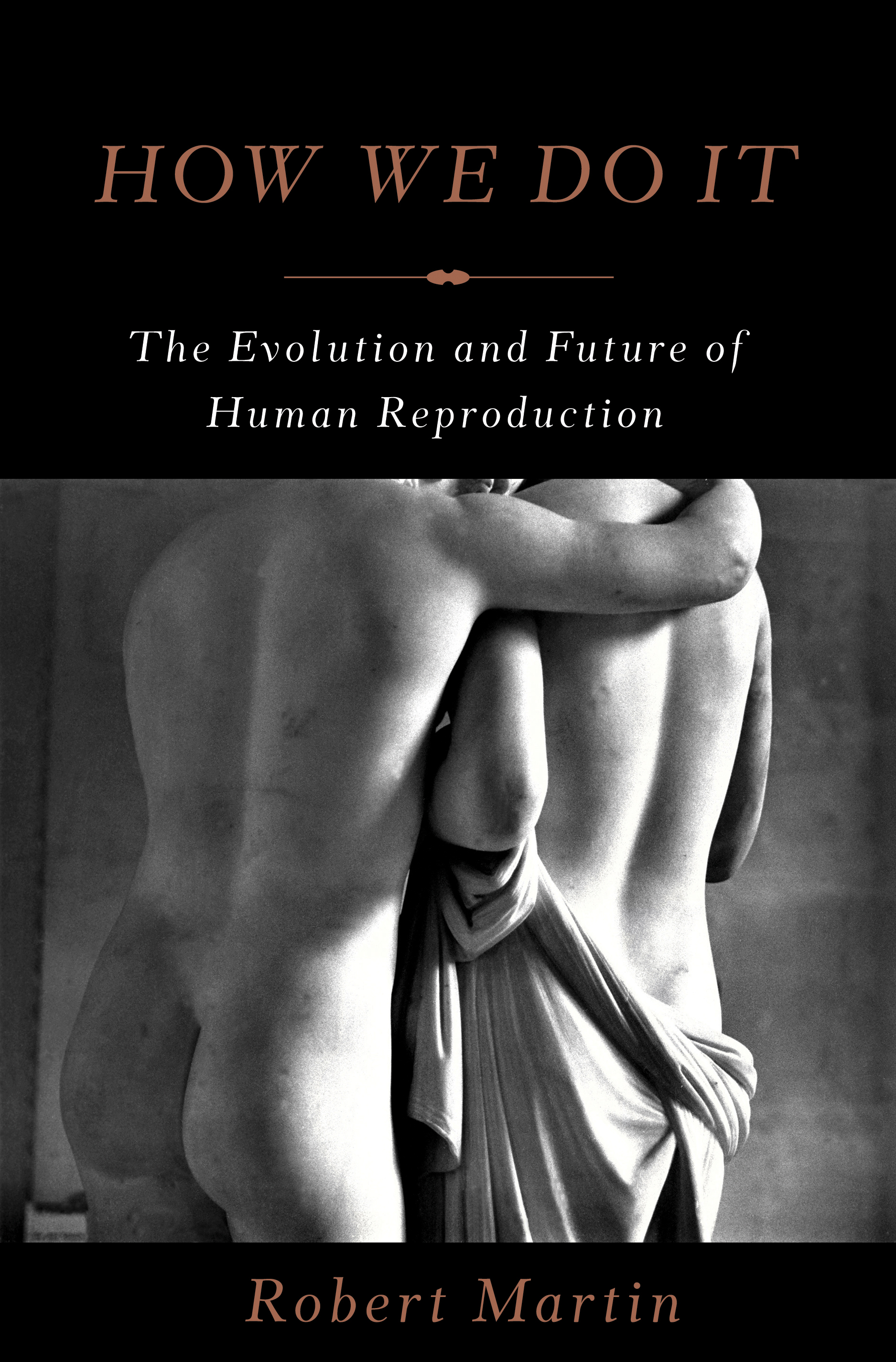 We’re mammals. This isn’t simply an arcane statement of biological classification. The message is far more profound: We have all the key biological features that set mammals apart from other animals. Two of them, hair and suckling, are obvious. What is not so obvious is that hair and suckling are linked. Let’s consider hair first.

Mammals typically have hair, although some have reduced or lost most of it as a secondary development. Aquatic mammals such as dolphins and manatees, for instance, are often almost bare. Humans also count among the exceptions, famously headlined in Desmond Morris’s 1967 best seller The Naked Ape.

Rare fossils with impressions of body outlines provide direct evidence that early mammals had hair. We know for sure that mammals had fur coats by 170 million years ago. And indirect evidence suggests that hair evolved earlier, more than 200 million years ago. Even before the first mammals evolved, advanced mammal-like reptiles had pits on their snouts for whiskers, which are specialized hairs.

As living mammals typically have hair, it’s understandable that some classifications once used the name Pilosa (from the Latin pilus, “hair”) for the entire group. But the other striking feature of mammals, suckling, is even more fundamental. It is truly universal, as exceptions don’t exist. All female mammals produce milk to feed their infants by suckling.

Both hair and suckling are more basic and ancient than live birth. Among modern mammals, a few unusual inhabitants of the Australian region— platypuses and spiny anteaters— still lay eggs, but they have hair and suckle their infants. All modern mammals suckle infants, so it is highly likely that their common ancestor already did so. Live birth evolved later, after the monotremes had branched away, originating somewhere between the origin of all mammals and the common ancestor that gave rise to marsupials and placentals, at least 125 million years ago.

In ancestral mammals, skin glands producing moist secretions were gradually converted to mammary glands yielding milk with a mixture of nutrients and antibiotics. We tend to think that milk is simply a source of nourishment for the baby. And that can lead to the mistaken belief that artificial milks only need to deliver the appropriate nutrients. In fact, antibiotics contained in a mother’s milk provide the baby’s first line of defense against germs.

It is tempting to think that biological classifications now universally use the official label Mammalia, derived from the Latin mamma, “teat,” because suckling is so fundamental. But did Mammalia really trump Pilosa in the naming game because biologists concluded that suckling is more important than a fur coat? Modern classifications began with Linnaeus, who chose the label Mammalia over Pilosa. However, science historian Londa Schiebinger discovered that Linnaeus actively campaigned to encourage Swedish women to breast-feed their babies, and indeed wrote a pamphlet about the topic. Thus we find that the emphasis on suckling rather than hair in his pioneering classification was more political than biological.

It is reasonable to infer that the common ancestors of all mammals suckled their offspring. Unfortunately, we cannot test this with fossil evidence as we can for hair. Even a complex feature such as suckling could have evolved separately in different lineages. Similar needs often lead to similar adaptations, so independent evolution of adaptations, or convergence, is quite common. When the ancestors of dolphins and whales returned to life in water, for instance, they developed a streamlined body form like that of fish. In a similar way, suckling might not have had a single origin, but how can we go about tracing its evolution? This is a dazzling case where genetic evidence— greatly strengthened by complete genome sequencing in diverse mammals— has come to the rescue within the last few years.

A prominent universal feature of mammal milk is the presence of special proteins known as caseins. Caseins are unique to mammals, and the genes that produce them are active only in mammary glands. Scientists have already sequenced complete genomes of an egg-laying monotreme (platypus), a marsupial (opossum), and five placental mammals (cow, dog, mice, rat, human). An evolutionary tree based on DNA sequences of casein genes reveals that there was only a single origin in the common ancestor that gave rise to monotremes, marsupials, and placentals. This finding resoundingly confirms the interpretation that suckling evolved only once in the earliest mammals.

Milk sugars provide additional evidence that suckling evolved in the earliest mammals. Comparisons show that milk-specific sugars were already present in the common ancestor of all mammals more than 200 million years ago. At that stage the sugars evidently were still diverse because different kinds dominate the milks of modern monotremes, marsupials, and placentals. However, in all placentals, including humans, lactose is the principal milk sugar, which means it was doubtless dominant in their common ancestor.

Lactose is a compound of two simple sugars, glucose and galactose. Compound sugars cannot pass through the wall of the intestine and must be digested to enter the bloodstream. By scientific convention, the name of any natural enzyme ends in “- ase,” so the enzyme that splits lactose into glucose and galactose is known as lactase. In the offspring of all placental mammals, from birth onward, a single gene produces lactase exclusively in cells lining the intestine. The capacity to digest lactose typically disappears soon after weaning. Human children, for instance, commonly stop producing lactase by about five years of age.

Once lactase production has stopped, any lactose in the intestine will remain undigested and travel on to the colon intact. Bacteria inhabiting the colon rapidly adapt to digest available lactose. The resulting fermentation generates large quantities of a gas cocktail containing hydrogen, methane, and carbon dioxide. This explains why many adults who consume milk products are afflicted by digestive problems. As one reviewer wryly noted, this has “socially unacceptable consequences.”

Because mammals do not normally consume milk after weaning, it is hardly surprising that many people can’t tolerate lactose as adults. Yet as the tradition of consuming dairy products became routine in some societies, secondary adaptation occurred, allowing adults to digest lactose. As a result, there is marked variation between human populations. Compared to Asia, where lactose intolerance in adults is predominant, the level in Europe is quite low. The control mechanism of the lactase gene was modified so that its activity persists after weaning. In fact, this change occurred in dependently, with different gene tic modifications, in central Europe and in northern Africa. Combined archaeological and genetic evidence suggests that lactose tolerance in adults originated about 7,500 years ago in dairy farming communities in central Europe. In Africa, the picture is more complex: Four different genetic modifications permitting lactase persistence have already been identified, and there are probably more. Most of the changes originated separately in Africa thousands of years ago, but the typical European modification is also found there.

The fundamental importance of suckling in mammals is indicated by the remarkably early appearance of the mammary apparatus during development. The basic framework of a developing infant’s body slowly comes into being during the embryonic stage, which takes up the first two months of human pregnancy. By the beginning of the subsequent fetal stage, the main organs of the body are visible. In contrast, the mammary glands begin to develop in the middle of the embryonic stage, after the limb buds form and well before body organs are recognizable.

In all mammals, two parallel milk lines develop as thickened skin ridges on the embryo’s underside, extending down left and right sides of the body from the armpit to the groin. In a human embryo, milk lines form in the fifth week after conception. Teats develop only later, usually in matching pairs, as outgrowths from the milk lines, which eventually disappear. In the human fetus, several teats start to develop along each milk line. Most of them usually disappear before birth, leaving one on each side. From birth onward, women— like monkeys and apes— typically have only a single pair of teats on the chest.

Because of developmental accidents, women sometimes have extra teats, although usually without any milk glands attached. Two, three, or even more pairs of teats are sometimes present, with or without local swelling. In 1886, gynecologist Franz Neugebauer reported a rare case of a woman with five pairs of teats. In addition to the usual teats on globular breasts, she had four accessory pairs: one in the armpits, two more above the breasts, and yet another below. When examined by Neugebauer, the woman was nursing an infant. In addition to the main milk supply from the breasts, some milk flowed from the teats in the armpits, and the other extra teats produced a little if squeezed.

Extra teats aroused no scientific interest five centuries ago, but Henry VIII reportedly had Anne Boleyn executed as a witch because she had a third nipple and perhaps even a breast along with it. Accessory teats were then seen as the devil’s work, so this anomaly no doubt made a handy addition to the trumped-up charges of adultery and even incest that Anne Boleyn had to face.

Across mammals, the normal number of teats in adult females varies from one to ten pairs, but it is usually constant for a species. The number of pairs of teats corresponds to the average number of offspring at birth. In species such as humans, horses, and elephants, which typically have single births, one pair of teats is the norm. Species such as dogs and rats, which produce litters of offspring, generally have several pairs of teats. It is not clear why there are generally two teats for each off spring. In any event, pairs of teats also match the number of infants in most nonhuman primates. Species with a single pair of teats usually have single offspring, as is the case with apes and most monkeys. By contrast, certain lower primates that have two or three pairs of teats usually produce litters of two, three, or four offspring. For instance, the two-ounce mouse lemurs that I bred for my research had three pairs of teats and usually two or three tiny infants per litter. Thus a woman’s single pair of teats tells us that humans are adapted for single births. On the other hand, the presence of several pairs of teats during early human development is a telling clue that distant mammalian ancestors had multiple offspring.

Excerpted with permission from How We Do It: The Evolution and Future of Human Reproduction, by Robert Martin.  Available from Basic Books, a member of The Perseus Books Group.  Copyright © 2013.