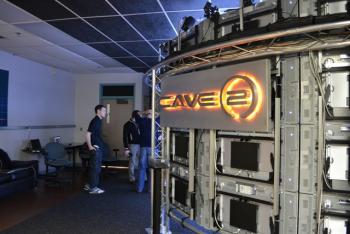 A 320-degree enclosure of glass, steel and electronics with tens of millions of pixels is the next generation of large-scale virtual reality environments. It's called the CAVE2 and it was developed by computer scientists in the Electronic Visualization Lab, or EVL, at the University of Illinois at Chicago.

Started in 1973, the EVL is the first lab in the United States, and arguably the world, that merged art with computer science.

"So, it's big enough that you can have really nice casual collaboration,” said Andrew Johnson, Associate Professor of Computer Science and member of the EVL. "When it first started, I think the main idea behind EVL was to give artists access to the most modern tools, which in that case would have been very early computers, even before there were personal computers. And at the same time have the artists help the computer scientists to really know how to take things to that polished artistic level rather than just stopping at a demo level.”

CAVE2 is approximately 24 feet in diameter and 8 feet tall. It’s made up of 72 3-D LCD panels, a 20-speaker surround audio system, and a 10-camera optical tracking system. Housed in an adjacent room on the UIC campus is a 36-node, high-performance computer cluster that powers the CAVE2.

"Welcome to Egypt. This is a virtual reconstruction of Luxor in Egypt. These images are created by using a panoramic set of cameras - stereoscopic cameras - swinging them around, capturing all this imagery and then reconstructing it in 3-D inside the cave,” said Jason Leigh, professor of Computer Science and the Director of the EVL. "We've been frantically working with researchers who are so excited about this new technology, gathering up all this data and putting it into the environment."

At its core, the CAVE2 mission is to foster collaboration between computer scientists and professionals in an array of other fields. 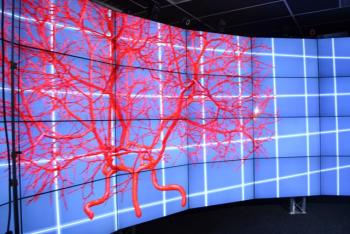 Dr. Ali Alaraj is an assistant professor of Neurosurgery at UIC and is working with the EVL on their pioneering brain imaging project.

“This is pretty much looking inside the blood vessels. You are walking around the blood vessels, you are looking at those arteries from every single perspective, from every different angle, so the information that you would gather will help you to have a better surgical planning,” said Dr. Alaraj. “The advantage in the future would be in surgical rehearsal, planning, and in medical education as well."

The group is also taking data from other imaging technologies to gain deeper, richer brain visualizations. The colored stream lines represent white matter fibers that could provide key insights into patterns of depression in patients.

“It's important because you can think of it as sort of the wiring diagram of the brain, and so the idea is that we can understand the connectivity between different brain regions if we can look at these white matter fibers and look for impairments in the integrity of these white matter fibers,” said Dr. Olusola Ajilore, assistant professor in the Department of Psychiatry at UIC.

"The perception is enhanced drastically when you step inside the data as opposed to looking at projections on a computer screen,” said Andreas Linninger. “So, you can just realize what the data means much faster, and that is what I think is so exciting about this technology: that you can perceive the data faster than by looking at them on a flat screen or on a report.”

Computer scientists at the EVL are even partnering up with the City of Chicago. They are currently in the process of feeding crime data into the CAVE2 for something that's being called Project Batman. 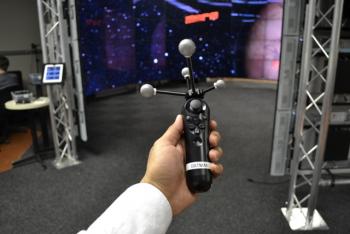 “Project Batman got its name, because we were jokingly saying that if Bruce Wayne were to build the Bat Computer, this is what it would look like,” said Leigh. “It would have this glorious high-resolution screen where he can fly through and navigate the entire city, and blips of crime would start appearing, and he could look at all the statistical information about where the crime was happening and why, and figure out into the future what he should do to best take care of those issues."

Using a modified version of Google Earth, officials will eventually be able to take huge amounts of crime data and visualize it on the virtual streets of Chicago. The hope is that seeing the data in a new way could potentially help shape the way policymakers tackle crime.

Of course, what good would a cutting edge technological marvel be if its inventors couldn't have a little fun?

Programmers have boldly gone where no one has gone before by creating a full-scale, 3-D virtual replica of Star Trek's USS Enterprise. Step inside the cave and you can actually walk around the ship’s deck. 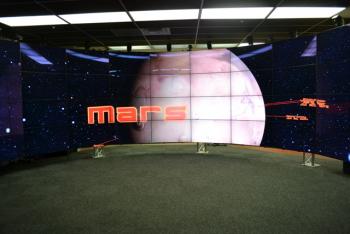 “The way we think about the Cave2 is that it's a special kind of lens. When we were in high school learning biology or chemistry, we would use these optical microscopes to look at specimens,” Leigh said. “Well, today, scientists look at these, not through these optical lenses but through digital lenses. Cave2 is really a lens to let you see things that you could have not possibly seen before.”

So, whether it's scanning the surface of Mars, embedding yourself in the brain of a patient, or soaring through the streets of Chicago like Batman, researchers here say the possibilities in this manmade cave are only limited by imagination. 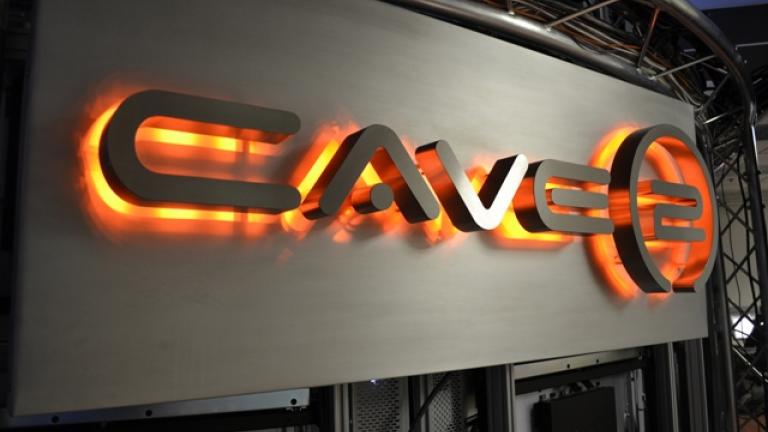