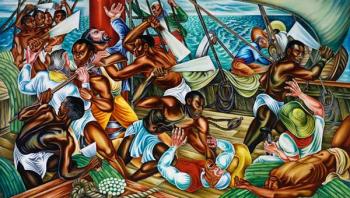 Dramatic works of art by a little-known artist visit Chicago for the first time. African-American painter Hale Woodruff was born downstate and made his mark as an educator and an artist. His murals of the slave revolt on the Spanish ship “Amistad” colorfully depict a turning point in the abolitionist movement, and are on display at the Chicago Cultural Center through June 16. We get a preview of the exhibit, Rising Up: Hale Woodruff’s Murals at Talladega College, on Chicago Tonight at 7:00 pm. View a slideshow previewing the exhibit.

As part of the exhibition, Nicholas Miller, a PhD Candidate in the Department of Art History at Painting Through the Past: The Amistad Murals and the Crux of Slavery in Hale Woodruff’s Artistic Practice" at the Chicago Cultural Center on Thursday, April 25. The exhibition is made possible through support from the Terra Foundation for American Art and admission is free. For more information on the exhibit and Miller's lecture, click here.

The Chicago Cultural Center isn't the only location in town where Chicagoans can catch a glimpse of Woodruff's artwork. An early painting by Woodruff, Twilight, is on display at the Art Institute of Chicago. We spoke with Sarah Kelly Oehler, the Henry and Gilda Buchbinder Associate Curator of American Art at AIC, to learn more about Woodruff and how his artwork changed the landscape of African-American art.

Who was Hale Woodruff as an artist?

In the 1920s, he started out working in Indianapolis in an avant-garde mode but was influenced by post impressionists, which was very different in the more traditional Midwest. In Indianapolis, he was noticed by progressive organizations there that were looking to promote African-American artists, and this helped him secure funding from the NAACP to travel to Paris to study. While in Paris, he studied Matisse, Cezanne and began collecting African art, which may have planted the seed for his later interest in mural painting. When he returned from Paris in the early 1930s, a lot of American artists were traveling to Mexico to learn from Mexican muralists like Diego Rivera. Woodruff followed suit and went to Mexico, where he worked with Rivera and became interested in murals. His time in Mexico was hugely influential, giving him the techniques and acumen to become a muralist. He harnessed the murals for his socially concerned purposes. 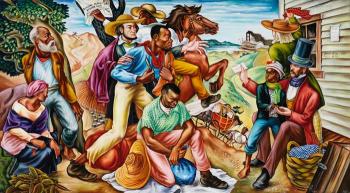 As a teacher and artist, where does Woodruff rank as far as importance and influence in the spectrum of African-American artists?

He also taught for about a decade at Atlanta University when he got back from Paris and started organizing exhibitions and teaching classes there. In this way, he was very much on the vanguard of many shifts in American art and African-American art. He later went on to become an art professor at NYU and went on to teach there for 20 years.

He’s best known for his murals but the piece on display at the Art Institute, Twilight, is indicative of another stage in his career.

It’s from very early in his career -- 1926 -- after his student years and after he was exposed to the movements going on in Paris. He later said he wanted it to be a modern painting and it demonstrates his expressive use of color. It’s very much artistic and expressive, using colors and layered pigments to create texture. This was in contrast to a period in Midwestern art, when conservative depictions of landscapes were still the norm. One of the reasons that we wanted to acquire Twilight is that he exhibited it here in Chicago as part of the Negro in Art Week, which was one of the first African-American art and culture exhibitions in Chicago. It was a major exhibition of the new Negro movement and the Harlem Renaissance. Woodruff was one of the artists at the show and he chose to exhibit Twilight. It marked a very important moment in his career when he was becoming nationally recognized.

Take a closer look at Twilight: