A new documentary confronts America's destructive economic trade relationship with a China. Author and filmmaker Peter Navarro joins us on Chicago Tonight at 7:00 pm. Watch a trailer and a clip from Death by China, and read an excerpt from the book the documentary was based on.

The following clip from the documentary discusses "The Great Wall of Mart."

The following excerpt is from Chapter 1 of the book, Death by China: 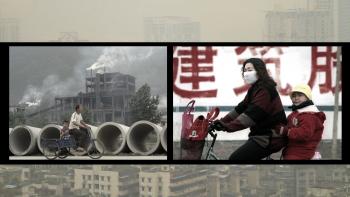 Death by China. This is the very real risk we all now face as the world’s most populous nation and soon-to-be largest economy is rapidly turning into the planet’s most efficient assassin.

• In the kids’ collection, these dangerous products range from lead-lined bracelets, necklaces, and toys to flaming pajamas and toxic toddler overalls.

• At your local drug store or online pharmacy, you can find all manner of “cures” that instead kill—from tainted aspirin, counterfeit Lipitor, and fake Viagra laced with strychnine to kidney-busting heparin and arsenic-laden vitamins.

• If you fancy death by explosion, fire, or electric shock, you can choose from a wide selection of booby-trapped extension cords, fans, lamps, overheating remote controls, exploding cell phones, and self-immolating boom boxes.

• Of course, if you’re both hungry and suicidal, you can always feast on imported Chinese fish, fruit, meat, or vegetables delectably infused with all manner of banned antibiotics, putrefying bacteria, heavy metals, or illegal pesticides. 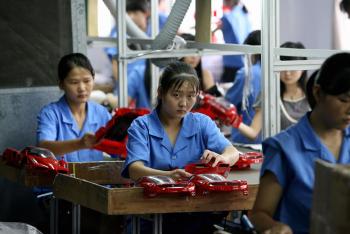 Even as thousands literally die from this onslaught of Chinese junk and poison, the American economy and its workers are suffering a no-less-painful “death to the American manufacturing base.”

On this economic front, China’s perverse brand of Communist-style “State Capitalism” has totally shredded the principles of both free markets and free trade. In their stead, China’s state-backed “national champions” have deployed a potent mix of mercantilist and protectionist weapons to pick off America’s industries job by job and one by one.

China’s “weapons of job destruction” include massive illegal export subsidies, the rampant counterfeiting of U.S. intellectual property, pitifully lax environmental protections, and the pervasive use of slave labor. The centerpiece of Chinese mercantilism is, however, a shamelessly manipulated currency that heavily taxes U.S. manufacturers, extravagantly stimulates Chinese exports, and has led to a ticking time bomb U.S.–China trade deficit close to a billion dollars a day.

Meanwhile, the “entry fee” for any American company wishing to scale China’s “Great Walls of protectionism” and sell into local markets is not just to surrender its technology to Chinese partners. American companies must also move research and development facilities to China, thereby exporting the “mother’s milk” of future U.S. job creation to a hostile competitor.

Lost so far in China’s mockery of free trade have been millions of U.S. manufacturing jobs even as the American blue-collar worker has become an endangered species. Consider the following: 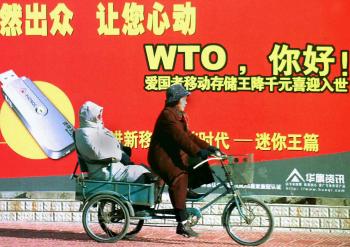 • Since China joined the World Trade Organization in 2001 and falsely promised to end its mercantilist and protectionist practices, America’s apparel, textile, and wood furniture industries have shrunk to half their size—with textile jobs alone beaten down by 70%.

• Other critical industries like chemicals, paper, steel, and tires are under similar siege, while employment in our high-tech computer and electronics manufacturing industries has plummeted by more than 40%.

As we have lost job after job across a wide swath of industries, many Americans continue to mistakenly associate Chinese manufacturing only with cheap, low-end products like sneakers and toys. In truth, however, China is steadily marching up the “value chain” to successfully grab market share in many of America’s best-paying remaining industries—from automobiles and aerospace to advanced medical devices.

On the wings of massive government support, Chinese companies are busily cornering the market in so-called “green” industries like electric cars, solar power, and wind energy. Of course, it is precisely these industries that American politicians have been so fond of touting as America’s best new sources of job creation.

For example, on the wind energy front, China now leads the world in both wind turbine production and protectionist irony. For even as China’s state-subsidized companies flood world markets with their own turbines, foreign manufacturers like the U.S.-based General Electric, Spain’s Gamesa, and India’s Suzlon are prohibited from bidding on projects in China as part of a “Buy Chinese” policy. 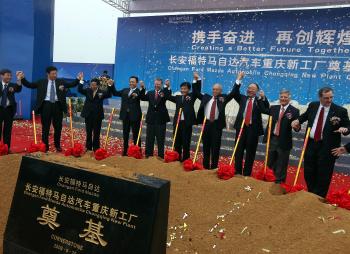 One of the most lethal consequences of China’s emergence as the world’s undisputed “factory floor” has been its increasingly voracious appetites for the Earth’s energy and raw materials. To feed its manufacturing machine, China must consume half of the world’s cement, nearly half of its steel, one-third of its copper, and a third of its aluminum. Moreover, by the year 2035, China’s oil demand alone will exceed that of total oil production today for the entire world.

As a permanent member of the UN Security Council, China can veto any UN sanctions it chooses to. For almost a decade now, top Chinese diplomats have been using China’s UN veto power to broker a wide range of “blood for oil” and “rape for raw materials” deals. Consider these facts:

• In exchange for Sudanese oil, China’s veto merchants stopped the UN from intervening in the Darfur genocide—even as a relentlessly brutal Janjaweed militia used Chinese weapons to forcibly rape thousands of women and kill 300,000 innocent Sudanese.

• China’s veto merchants also blocked UN sanctions against Iran and its anti-Semitic, sham-election president to gain access to the world’s largest natural gas fields. This act has blown open the door to nuclear proliferation in the Middle East. It has also dramatically raised the probability of a nuclear strike on Israel and significantly increased the risk of an atomic weapon falling into the hands of anti-American jihadists.

China’s abuses of the peacekeeping mission of the United Nations are hardly isolated incidents. Instead, they are part of a broader “going abroad” strategy that has transformed China from a once isolationist nation into arguably the world’s biggest budding colonial empire. This is no small irony for a country originally founded on anti-colonial, Marxist principles and once heavily victimized by the British Empire and its opium wars on China.

Throughout Africa, Asia, and America’s backyard of Latin America, China’s own twenty-first century brand of colonialism always begins with this Mephistophelean bargain: lavish, low-interest loans to build up the country’s infrastructure in exchange for raw materials and access to local markets.

Of course, once a country takes this colonial bait, rather than use local labor, China brings in its huge army of engineers and workers to build new highways and railroads and ports and telecommunications systems. This infrastructure then both literally and digitally paves the way for the extraction and transport of raw materials. So it’s back to China’s factory floors in cities like Chongqing, Dongguan, and Shenzhen for Cameroon’s timber, the Congo’s magnesium, Djibouti’s gypsum, Gabon’s manganese, Malawi’s uranium, Mozambique’s titanium, Niger’s molybdenum, Rwanda’s tin, and Zambia’s silver. As the final colonial coup de grâce, China then dumps its finished goods back onto local markets—thereby driving out local industries, driving up the unemployment rate, and driving its new colonies deeper into poverty.