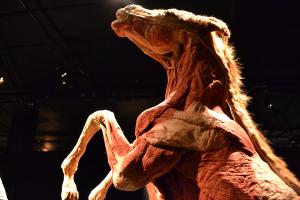 Two years ago, the Museum of Science and Industry presented the U.S. debut of Body Worlds 2 - a stunning display of human bodies preserved through the process of "plastination," a technique that replaces body fluids and fat with plastics. Now, the museum has unveiled the latest exhibit from the Body Worlds creators; Animal Inside Out is making its U.S. premiere here in Chicago.

The animals have been preserved using plastination, invented by controversial German anatomist Gunther von Hagens, creator of Body Worlds. Hagens and his wife -- curator Dr. Angelina Whalley -- created the latest exhibit two years ago.  It has since been touring Europe and features more than 100 pieces of various specimens.

“My husband Gunther von Hagens has invented the plastination technology almost 30 years ago, and over that many years he plastinated once in a while also animal specimens,” said Dr. Whalley. “It was not necessarily meant to come up, come together as an animal show. But, two years ago, we recognized that we have such a great collection of animals by now that it is really necessary to put this together, make this accessible to the laypeople.” 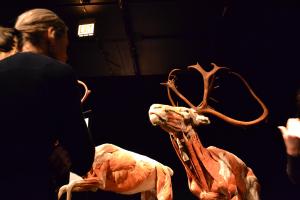 The plastination process itself involves embalming the body and then dissection. To remove the body fat, the specimen is place in an acetone bath and then immersed in a liquid plastic, like silicone. Then the acetone is suctioned out in a vacuum process, leaving behind the details of the tissues, blood vessels and bones.

These exhibits are no stranger to controversy. In the past, questions have been raised about the sources of the human cadavers used in the exhibits, as well as whether some of the animals had been obtained legally.

“Well, we were very lucky to be able to collect this over many years. We got many donations from zoos, from private people, but also from corporations with universities we had over the years,” said Dr. Whalley. “So, none of the specimens on display have been harmed or killed for the purpose of this exhibition.”

She says the purpose of the exhibit is to highlight the similarities between the bodies of humans and animals. Surprisingly, she says, while the intricate specimens are delicate and detailed, they are generally extremely sturdy. 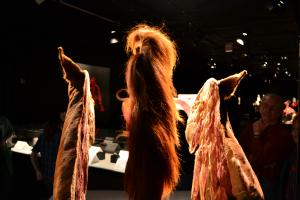 “Well, the plastinates, when they are impregnated with the silicon rubber, they are really durable, so that's not such an issue to get them transported,” said Dr. Whalley. “We have other specimens that just show the cardiovascular system, just the arteries. They look so beautiful, like red corals. They are really, really fragile, and you will notice that we have also quite a number of specimens that are really, really big.”

The exhibit does feature some of the largest specimens Body Worlds has ever created, including a 2500-pound bull, an octopus and a camel.

But the largest animal on display is a towering adult giraffe that features a clear view of the seven exceptionally long cervical vertebrae that make up its neck. 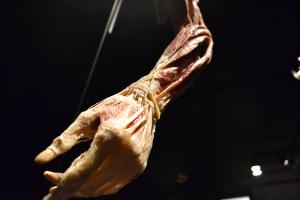 “We want to wow people by putting specimens on display that are really wonderful to look at, that are beautiful, and that are giving a sense of life, because the exhibition is all about life,” said Dr. Whalley. “It is certainly, by realizing how wonderful it is, you will have more respect in front of life, but in particular, in front of these animals.”

And while some of these animals have been featured in previous exhibitions, the bulk of the specimens have never been seen in the U.S. before.

Animal Inside Out will be on exhibition at the Museum of Science and Industry through Labor Day for an additional ticket fee.

Related Links:
More on the exhibit
More on Museum of Science and Industry
Image Gallery: 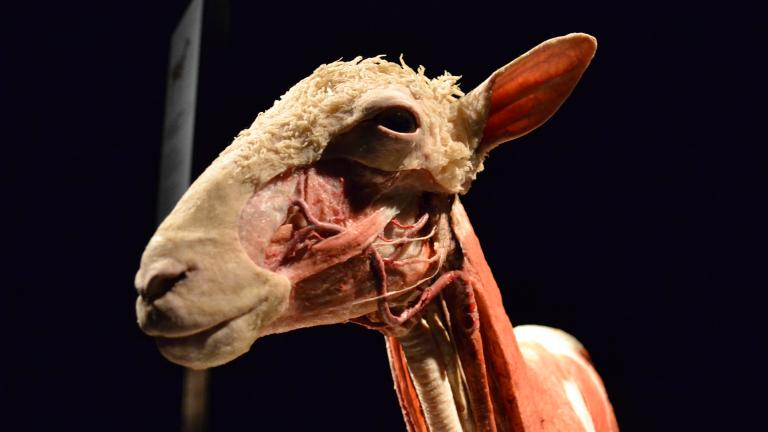