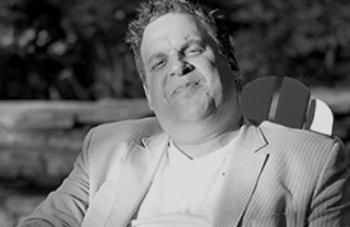 In 2011, Garlin performed his stand-up comedy show, No Sugar Tonight, in which he talked about his weight battle and addiction to sugar.

Garlin is back for a limited run at Steppenwolf (Dec. 4 – 16) for his new show, Closer Than I Appear.

He joins us on Chicago Tonight at 7:00 pm with his mother. It’s an interview you won’t want to miss!

Chicago Tonight spoke with Steppenwolf’s Artistic Director, Martha Lavey, about why Garlin is a good fit for the theater’s selections.

This is Jeff Garlin’s second run at Steppenwolf. Why did the theater decide to have him back?

Because he’s so fantastic. I wasn’t able to see him last time, interestingly enough. I was in a show at the same time and all our performances coincided, so I couldn’t see him, which was a drag. The only time I got to see him perform was back when he was doing, I Want Someone to Eat Cheese With at the Live Bait Theater years ago, and I loved him. He’s tremendously funny and the audience loves him, he’s good to work with. He’s a total Chicago guy and he’s very talented.

How does Garlin’s stand-up comedy routine, that’s more casual and improvisational, fit into what Steppenwolf Theatre does?

We have various people who come on a one-off basis. Our programming is eclectic and when we bring someone in, it’s more the feeling of what their connection is to the audience. In general, at Steppenwolf, we have a loyal and close audience who enjoy a wide variety of stuff. They’re critical thinkers and culturally engaged, and we want to give them a menu of diverse offerings and Jeff provides that. It’s his spontaneity and tremendous wit. I think audiences like the fact that it feels improvisational and relaxed, and feel his rapport with them is authentic.

Why do you think Steppenwolf is a good venue for him to perform, as opposed to a stand-up comedy club?

His relationship with the audience can be very specific and intimate, and feels comfortable. That’s the other neat thing too, he really started in theater. I saw him in a tiny theater, and now he has a jumbo platform for his work, but I think he likes to come back to theater and be in a relationship with people who are really there specifically for him. We like that, and he does too.