Eddie Payton chronicles the life of Sweetness and challenges another high-profile biography of his brother Walter. He joins us on Chicago Tonight at 7:00 pm. Read an excerpt from his book, Walter & Me: Standing in the Shadow of Sweetness, along with the foreword written by Mike Ditka. And view a photo gallery. 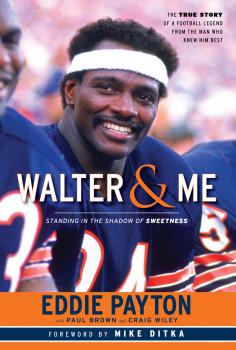 I don’t have to read an unauthorized biography of Walter Payton to know what kind of man he was. I coached him. I knew him myself. He was my friend. And when it comes to someone writing a book about my friend, I have to ask, how well did the writer really know him? Did he grow up with him? Was he on the field with him? Did he live with him? Was he a parent? Was he a coach? Was he a brother? In the case of Jeff Pearlman, the answer to those questions is clearly “no.” Pearlman wrote a book about Walter, but it was written only from a distance. It was all secondhand. He put together a few things he’d heard—some of them from people who have very little credibility—to paint a picture that just doesn’t look much like the Walter I knew.

One thing we all know is that Walter Payton was a great football player. That is unquestionable. Even Pearlman can talk about Walter’s skills on the field and be taken seriously, because we have the evidence on film. We measure greatness by what we see a person do, and as a football player, Walter did it all. He was a majestic runner, he was a vicious blocker, he controlled the ball with magic, and he caught the ball with grace. He even passed the ball a little before I got to Chicago.

What’s more, though, is that Walter was the consummate teammate, a born and respected leader. Everyone looked up to him, even the players who physically towered over him. He was the key guy on our 1985 Super Bowl team, yet he put the team above himself. He was a true cornerstone in every sense of the word. A lot of NFL players do great things, but few are truly great the way Walter was, and none are greater. If I had to pick one player from any era to start a football team with, it’d be him.

Have there been other guys who ran with the ball better than Walter? Maybe. I’ll let you argue about that. But you can’t argue about the fact that nobody ran harder than Walter. Nobody left more on the field. Nobody had a bigger heart or a greater will to win. But that’s not all. Walter was so much more than a football player. I’ve known a lot of superb athletes in my life and have met a lot of the current players in the NFL. Never have I met a guy who was or is as giving, sharing, or understanding as Walter was. He took time to be with regular people. He visited kids who needed a hero. He paid attention to and truly respected the fans who watched him play every Sunday. He was a part of them, and they were a part of him. Walter did the little things that some of the egomaniacs in the game today won’t do…and he did them because he wanted to, because that’s what defined him. He didn’t just spend time with the common man; he was one of them. He just happened to be uncommonly gifted.

Was Walter a perfect person? Are you? Listen, we’re all human beings. We’re all in this thing together, trying to find our way, and, yes, we all mess up every now and then. I think to err is human, and to forgive is divine. I don’t know every single detail about Walter’s personal life, and I can’t say for certain that he never did anything wrong. When it comes to his marriage, I know that he and Connie did separate, but that’s about all I know. But the Walter Payton I knew was good for everything that mattered to me: people, football, and, in particular, the Chicago Bears. He’ll always hold a high place in my book, and you couldn’t pay me enough to ever crack the cover of Pearlman’s book. I know he tried to say you can’t just look at the excerpts, but I saw all I needed to see in those excerpts. It’s pathetic to write something like that about an individual who isn’t here to defend himself. If the person has passed and can’t respond, then just let the speculation rest with him. Period.

Obviously, if you’re going to look for negative things and pick through someone’s life, you’ll probably find something that isn’t all that great. If you look at anyone closely enough, a blemish or two will appear. That’s just part of having skin, which is something we all have. It may seem like some of us have armor instead of skin, but I assure you, those guys are still human. So what if we found a chink in Walter’s armor? We’re talking about a guy who had so many great qualities that, when you add them up, his shortcomings all but disappear. He had characteristics that anyone would want in a son or a friend or a neighbor or a father. A man should be judged on the whole, and the whole of Walter Payton was pretty damn good. So, let’s not listen too much to the guys who didn’t know Walter. They only have fragments to share and cannot possibly give us the whole. Instead, let’s listen to someone who really knew the man.

I only knew Eddie Payton through Walter, but I saw firsthand what he could do on that football field. I wish I’d had Eddie returning kicks for me, I can tell you that. He was the brother of the greatest player of all time, but he was a pretty damn good player himself. He taught Walter well when they were at Jackson State, and, like Walter, Eddie was a quality person off the field. I know Walter was very proud of Eddie and thought a lot of his big brother. I know this because I coached Walter and saw him every day. It was obvious that his brother was a big part of his life. They had a bond that just couldn’t be broken. It was a bond that only siblings can share. Having grown up with Walter, Eddie knew him better than most. He’s certainly more than a writer just trying to fit some fragments together. So, let’s stop listening to those who didn’t wholly know my friend. Instead, let’s hear from someone who was there from the beginning and all the way through to the end. Let’s hear from Eddie Payton.  —Mike Ditka

The following excerpt is from Chapter 1: Dyin' Ain't Easy:

There’s another side to the story of Sweetness that has to be told. Guys like Jeff Pearlman can’t tell it. They don’t have memories of growing up with my brother. They didn’t know him before he was a star. They don’t have much more to give you than dead fish. The truth about Walter Payton can only come from those of us who knew him best, those of us who truly loved him, not just for a short time, but for his whole life.

I’ll never forget October 31, 1999, Halloween night. Walter was at his home, where he wanted to spend his final days with his wife, Connie, and other family. None of us knew exactly how long he had, and we wanted to spend as much time with him as we could. I was there for a visit and had just walked into his bedroom. I didn’t know exactly what we were going to say to each other, of course, but it turns out we were about to have a conversation that will stay with me forever. It was one of those special moments that comes once in a lifetime, and it was about to take place right there in that room between us Payton boys. I’ll let you in on that conversation later in the book, but for now, just take in the scene with me.

At first, there were no words spoken. There was only the background noise of a television with the volume turned low. I tiptoed farther into the room, and before I broke the silence, I just looked at him. There was my baby brother, unable to move, just lying there, dying. I shook my head. It couldn’t be. A million images of Walter and me ran through my mind. Our life together flashed before my eyes. I remembered us as children hunting in our neighborhood woods, as teenagers playing together on the field, as young men going out into the world. There was a hard conversation coming later in that room, but all I wanted to do when I saw him there was go back—back to the beginning of an era. Back to when the man you know as Sweetness was just my baby brother. Back to where you’ll find the truth about Walter Payton.

This excerpt from Walter & Me: Standing in the Shadow of Sweetness is printed with the permission of Triumph Books / www.triumphbooks.com/EddiePayton.