Chicago rapper Chief Keef has earned himself a major record contract. Now the South Side native also faces legal challenges. We talk about the 17-year-old's talent and troubles, and what it says about Chicago with local poet Kevin Coval on Chicago Tonight at 7:00 pm.

"Every institution in Chicago fails Black youth. Segregated and systematically inequitable, Chicago is a town where white kids exist in an increasingly idyllic new urban utopia, and Black and Latino kids weave and dodge through a war zone.

The largest specter in the spectacle and circus that surrounds the city, Chief Keef has become its poster boy and scapegoat.

He is a young man who looks and sounds like thousands of young people in Chicago—reared in a culture of nihilism, death, and capitalism.

He is a young man who sings the demented measures and results of white supremacy, the legacy and maintenance of grand inequity. Chief Keef sings a tortured and tormented Chicago song. It is a song we need to listen to carefully." 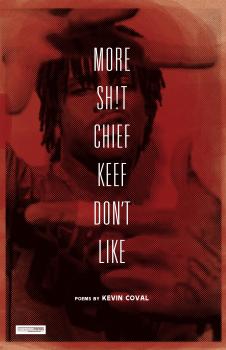 critics never look in a mirror, (clearly)
tight yellow pants and a tshirt
w/ some animal or poindexter
button up. a clown propeller hat
all that’s missing.
they took Keef to a gun range
they tape Keef getting blunted
a teenager on parole
a post-traumatic stress syndrome
survivor from the murder capital
they take to a gun range
ironic
it’s the only time
they’ve ever seen iron.
their whole lives
a vacation. an eternal retweet
a side joke and haha, Keef is a deposit for
their class and race hysteria
their middle brow(n) snobbery
their rapgenius mockery
their (neo)liberal art degrees
their fake
downness
in sheep clothes
if sheep wore
their little brothers’ pajamas.
hipsters are the new yuppies
here to gentrify the block
here to fake over the hood
on start-up capital
inherited
from their parents.

from stage
he could see
thousands
crowd
surf in a gated
Grant Park
district. land
stolen by those
who mosh pit.
his whole camp
face the Great
Lake: eyes on the prize
on water some
in the crew
have never seen.
heat rises from the ground
like fire in the brush
in the streets.
thousands of hands
bodies bounce around
mouth every word
pink mouths
around every word
pink mouths
around every n-word
more shit
he don’t
like

Listen to Coval's recorded track of the book’s final poem, “Chicago (Keef)”, which is a revisioning of Carl Sandburg’s famous piece, “Chicago" in the player below.