The Chicago Air and Water kicks off this weekend. Our Geoffrey Baer attended a media preview event at Gary/Chicago International Airport on Thursday. Read his personal narrative about his experience below and view a slideshow of his photos. Be sure to click on the links throughout the story to see corresponding images. 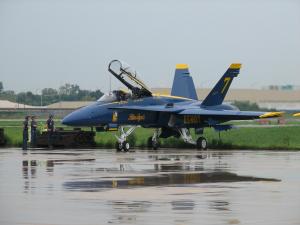 It was pouring rain when I pulled my car into the parking lot at Gary/Chicago International Airport. Not great weather for a scheduled media preview of the planes that will star in the 2012 Chicago Air and Water Show. In fact, there were no planes in sight.

The Blue Angels and several fleets of colorful civilian aerobatic aircrafts were tucked away in hangars. I joined a mob of soaking wet reporters and photojournalists huddled under umbrellas, as we were escorted to the hangars to view the planes and meet the pilots.

Inside the first hangar, planes were packed together almost wingtip to wingtip, like so many colorfully dressed guests at a crowded cocktail party. We were cautioned to move carefully around them, lest we inflict some unseen damage that could later wreak havoc for a pilot in the middle of a death-defying maneuver.

I spotted legendary aerobatic pilot Sean D. Tucker, giving an interview to a reporter. I walked up just as he was finishing a sentence with the words, “…when I’m flying upside down, 10 feet off the ground.”

Tucker performs in a tiny cherry red bi-plane, called the Oracle Challenger III.  It was custom-designed to be nearly impossible to fly. Tucker later told me, “I want complete instability. I want it hard to fly.”

He says this is not just for the challenge (although he loves the challenge). It’s because he wants the plane to do things a more stable airplane simply could not do.  The center of gravity is so far back toward the tail, and the wings so oddly shaped, that if he lets go of the stick the plane immediately spins wildly out of control.

Also in that hangar were four 1930s-era North American AT6 “Texan” advanced trainers that make up the Aeroshell Aerobatic Team. One of the pilots allowed me to climb into the cockpit and kindly agreed to snap my photo.

Calmly observing the hustle and bustle of pilots and press was Herb Hunter, who has been the air show announcer since 1988. Hunter told me he started out as a performer in the show in 1979. He was co-pilot of a KC-135 tanker airplane (a military aircraft used for mid-air refueling.) A few years later, still in the military, he was asked to announce the KC-135 demonstration at the Chicago Air and Water Show. As he finished his narration, he looked over and saw that the regular announcer hadn't yet returned to take back the microphone. The show director implored Herb to keep on announcing. The rest is history. And, oh yes… Herb’s also an active duty United Airlines 747 captain flying international routes.

As the rain continued to pour, I visited another hangar, where the six members of the Lima Lima Flight Team were waiting out the weather. Their yellow Beechcraft T-34 Mentor training planes date from the 1950s. The name “Lima Lima” comes from the FAA designation for Naperville Airport, where the team was founded. All airports have these FAA nicknames. You see them on your luggage tags at O’Hare (ORD) and Midway (MDW). Naperville Airport is LL10 (Lima, Lima 10 in pilot lingo).

The Lima Lima pilots get paid to perform, but they told me they all have day jobs, too.  One works in market research, another is an engineer for Caterpillar.  There’s a motorcycle dealer, an insurance broker, and two retired airline pilots.

Their trademark is close formation flying. They fly as closely together as possible without overlapping wings or other parts of the airplane. They told me they don’t want any “swapping paint” (the term pilots use when two aircraft touch in mid-air).

With a certain amount of awe in their voices, they told me that the Blue Angels fly even closer together, routinely overlapping wings noses and tails. And they don’t swap paint either.

Eventually the rain stopped and the Blue Angels pulled their Boeing F/A-18 Hornet fighter jets out of the hangar. I watched one performing on-the-ground checks, the pilot revving its engines to almost deafening decibels. Parked nearby was “Fat Albert.” That’s the specially painted Lockheed C-130 Hercules transport plane that carries all their gear from show to show.

I got a closer look at a more drab-colored C-130 that’s used as the jump plane for the U.S. Navy Parachute Team “Leap Frogs.” These monsters are designed to land on short, dirty runways and transport troops, evacuate people and bring in supplies. During the Vietnam War era, rocket engines were attached to them for extra quick “jet assisted takeoffs.”

With the clouds clearing, the Blue Angels roared off into the sky for some practice runs along the Chicago lakefront. Wheels up just seconds after takeoff, they rocketed northward. I later heard from a number of downtown office workers that the tiny, powerful jets rattled a lot of windows in the Loop!

The Chicago Air and Water Show takes place along the lakefront near North Avenue Beach on Saturday and Sunday from 10:00 am – 3:00 pm. Admission is FREE.