Excerpt from Chapter 9
"Chicago’s Native Son: Charles White and the Laboring of the Black Renaissance"
by Erik S. Gellman

Charles White applied his art as a weapon in Chicago. In 1935, he asked his teacher at Chicago’s Englewood High School why their history textbook only mentioned African Americans once. The teacher told him to “Sit down and shut up.” In response, White staged his first sit-down strike. As a self-described “very shy” young man, White felt that he “wasn’t articulate enough to explain” his own interpretation of American history. Instead, he “sat down hard . . . for the whole year without participation.” He remained silent the whole term and handed in a blank sheet of paper for his final assignment, thus failing the course. “I became a joke in the class,” he concluded, “everybody treated me as a delinquent.” With no other outlet for expression, White became secretly interested in art. He would soon become the youngest member of the Arts Craft Guild, an informal group of self-taught African American artists, and would win a scholarship to the Art Institute in 1937. For White, his development as an artist in Chicago had a direct connection to his feeling of isolation in school and elsewhere. “I had no other tools to fight with,” he concluded, “so the only way I had to fight was with my brushes.”1

Charles White’s artistic and political development provides a window into Chicago’s cultural politics during the 1930s. White, an artist who emerged as a leading figure on the South Side during this turbulent yet prolific time, helped forge the social and ideological networks that connected a cadre of African American artists and black activists in Chicago. Scholars who have studied this era have concluded it represented a Chicago renaissance in the arts. Bill V. Mullen and Robert Bone have placed black artists within the radical political currents of the Popular Front (roughly from 1935 to 1947) by analyzing Communist Party activities and the influence of Marxism on cultural production. They both argue that this arts movement diverged from the Harlem Renaissance of the 1920s because of its participants’ commitment to the working class. They show how these artists sought to break away from the somewhat solipsistic writers of Harlem and why they found the industrial metropolis of Chicago to be a particularly fertile ground.2 Meanwhile, art historians describe these artists’ politics as part of a stylistic change.3 By focusing on the experiences of Chicago-born Charles White—both during his Chicago years in the 1930s and on his later artistic and political trajectory—this essay builds upon these works by asking how these African Americans transformed notions of history and racial protest and how these cultural politics change our understanding of the artistic movement in Chicago between the 1930s and 1960s. 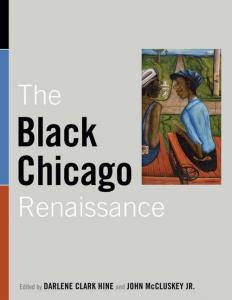 As a young man, Charles White discovered African American history not in his high school class but at the Chicago Public Library. While at work as a domestic, White’s mother, Ethel Gary, often had to leave her young son under the librarian’s supervision. The library became a refuge for White as he systematically browsed all of its collection. “I [read] through everything in the children’s section,” White recalled, “and then, at the age of twelve, begged the librarian for a card that would permit me to enter the section where there were more advanced books.” Despite being two years below the required age, one of the staff members gave in to White’s persistence and issued him an adult-reader card. Authorized to explore these previously forbidden books, White devoured them. Then, as a fourteen-year-old, White witnessed the opening of the George Cleveland Hall branch of the public library that became a crucial institution for Chicago’s South Side black community; during its first five years of operation, the library loaned an annual average of two hundred thousand books. As one Chicago Defender article explained, the library’s establishment was “a milestone of attainment for the community,” and its head librarian, Vivian Harsh, “worked relentlessly toward supplying universal service on material concerning the Race.” Harsh would become a pivotal figure in the promulgation of black culture in Chicago, and her efforts made a direct impression on Charles White and other black artists.4

During one of his marathon sessions at the library, White “quite accidentally” found The New Negro, a book that changed his life. Edited by Alain Locke in 1925, this volume represented the most significant anthology of the Harlem Renaissance. It featured the celebrated black voices of poets like Countee Cullen, Claude McKay, and Arna Bontemps, novelists like Zora Neale Hurston and Jean Toomer, and intellectuals like W. E. B. Du Bois, Langston Hughes and James Weldon Johnson. “This book opened my eyes,” White recalled, because “I had never realized the Negro people had done so much for this world of culture, that they had contributed so much to the development of America.” The book inspired White “to search for other books on Negroes, which led to the Negro historical figures, individuals that played a role in the abolition of slavery.” White read about the slave revolts of Denmark Vesey and Nat Turner as well as figures like Harriet Tubman and Sojourner Truth in his own self-taught U.S. history course. Perhaps most important for White, The New Negro volume had illustrations by Aaron Douglass. The idea that “blacks painted” mattered because he had earlier experimented with art by using his mother’s curtains as canvasses, only to be punished by her and told to concentrate on music lessons instead. The New Negro proved to him that blacks had a rich artistic tradition, including the visual arts.5