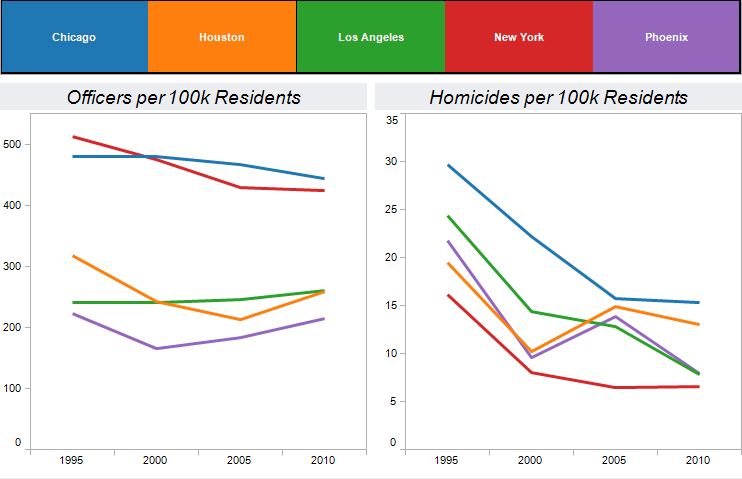 Chicago has the most cops, and the most murders, per capita among major U.S. cities, according to a report from the Chicago Justice Project. We speak with CJP's founder Tracy Siska and police union president Michael Shields on Chicago Tonight at 7:00 pm.

Siska says he decided to analyze the numbers because the Fraternal Order of Police, the police union, claims Chicago is understaffed compared to other cities.

"People think the only way to prevent crime is through a huge police presence, and the police foster this view," Siska says. "But it's far more about social issues than it is about police."

Siska also tracked the murder rate and police staffing levels going back to 1993. While police staffing has bounced around from just above 12,000 to almost 14,000 and back down again, the murder rate has significantly dropped over the past 20 years. That undermines the FOP's argument that more police reduce violence, says Siska, who thinks deployment patterns and tactics "have more to do with whether police impact violence than the actual size of the force." 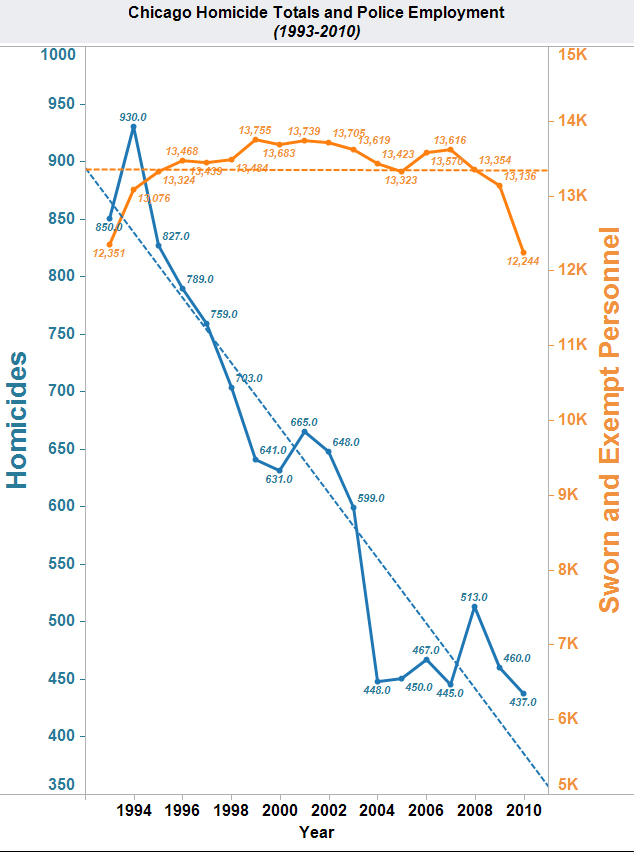 "That is not what you hear from the FOP or the media," Siska wrote in his report, "who can hardly control themselves talking about how short the city is on officers and that the only way to reduce violence is to hire more. The data presented here surely throws a bucket of cold water on those assumptions."

But the police union takes issue with the conclusion.

"I think more police equal safer streets," says Paul Geiger, a lawyer with the FOP. "The murder rate is going up now and the department is downsizing. That's not a long period of time to look at, but those facts are indisputable. Is there some sort of linkage? Certainly. Is one completely responsible for the other? Probably not."

Both the union and Siska agree that too much attention is paid to the murder rate, which police have less control over compared to shooting incidents. But they don't' see eye to eye on how much influence police have on crime.

"A lot of shootings are gang-related, so you have to get in between them and stop retaliations," Siska says. "But they're not so much Gang Leader A orders underlings to shoot Gang Leader B. A lot of it is interpersonal stuff. And for that, cops are unlikely to have an impact. They can't be everywhere."

Geiger says the mobile strike forces, which Police Superintendent Garry McCarthy disbanded to put more cops on patrol, did decrease that type of crime by flooding a heated area with trained "hard-chargers."

Siska also had some harsh words for the FOP in his report.

"The FOP is a union that is looking, like all unions, to increase their membership while not necessarily having the best interests of the larger city at the forefront of their demands," he wrote in the report. He also writes that their calls for more police have "indoctrinated" Chicagoans.

That rhetoric is "nonsense," says Geiger. "I don't know anyone who joined as a police officer to sign up more members and collect more dues."