Asian Carp: Taste of the Town 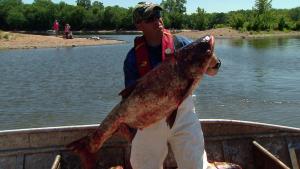 For years, scientists have warned that an Asian carp invasion of the Great Lakes could devastate the balance of the aquatic ecosystem. Congress has given the Army Corps of Engineers a tight deadline of 18 months to figure out how to stop that from happening.  And, while an electric barrier near Chicago is holding the carp at bay, researchers are studying the effectiveness of an old-fashioned strategy.

You definitely don't want these voracious fish invading the Great Lakes, but now that they're in the Illinois River and here to stay, scientists are wondering if there's a profitable way to keep Asian carp populations in check.

At Stratton State Park about 60 miles southwest of Chicago, it’s a story we’ve heard before.

“This is kind of like the battleground right here, said Vic Santucci. “The fish are moving up from the Mississippi River through Illinois, and up towards the Great Lakes.”

But there's an ironic twist to this doomsday story which could be solved by striking a delicate balance between economics and the environment.

In the backwaters of the Illinois River, Santucci, the Asian carp specialist for the Illinois Department of Natural Resources, and his team, are evaluating whether the carp can be controlled the old-fashioned way - by catching them.

The Catch-22 is that while the ultimate goal is to fish down the populations to prevent ecological damage, there have to be enough Asian carp left to make the business lucrative for commercial fishermen. 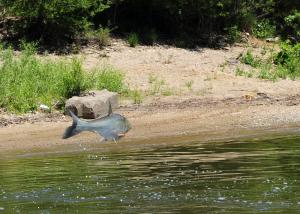 “It’s really driven by free market principles: how much they can get for fish, how much it costs to catch those fish and that type of thing, and then you need a market. You know, what can you do with the fish?” said Santucci.

Santucci says it’s a numbers game. Removing Asian carp from the population downstream prevents strays from making their way up toward the electric barrier in the Chicago Sanitary and Ship Canal. This has been the Army Corps of Engineers’ last line of defense to block the Asian carp from invading Lake Michigan and all of the Great Lakes.

Willink, a Senior Research Biologist at the John G. Shedd Aquarium, says the focus now needs to be on developing ways to prevent the fish from breeding near the electric barrier because smaller, juvenile fish are more likely to slip through the blockade.

“And one of the ways to do that is to sponsor commercial fisherman to go out there and try to catch as many as they can,” said Willink.

Gary Shaw is one of 10 commercial fishermen who's allowed to fish the backwaters accompanied by state biologists.

“Pound fishing with gill nets is the best way to get ‘em right now,” said Shaw.

It’s not a bad haul. Shaw and his colleagues caught about 3,500 pounds of Asian carp in one morning.

According to the Army Corps of Engineers, Asian carp are capable of eating 20 to 120 percent of their body weight each day. But for commercial fishermen, big fish don't always translate into big money.

“One of the problems with getting people interested in eating Asian carp is they happen to have a lot of bones in some strange places so they're really hard to fillet,” Willink said. 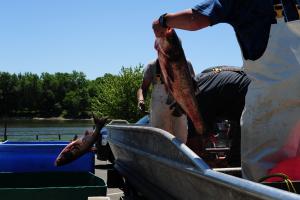 Add to that the common misperceptions that these fish don’t taste very good because people assume they are bottom feeders, and you have a brand problem.

Schafer Fisheries in Thompson, Illinois is addressing both those problems. Ever since the fish first turned up, the company has been looking for innovative ways to process and market Asian carp.

James Schafer is the general manager of Schafer Fisheries. He says his company has successfully tapped into an existing demand.

“On the fresh side, it would be the Asian community here in the U.S., and on the frozen side it would be ethnic communities around the world,” he said. “U.S. is the only country that does not eat carp. Outside of the U.S., everybody eats carp; it’s a staple. Americans have this mentality that they don't want to eat a bony product. They don't want to fight with it."

Schafer says that once all the bones are removed, an Asian carp filet yields a relatively small and expensive 4- to 5-ounce portion that can't compete with more economical alternatives, which is why they have turned to alternative methods of extracting the meat.

“Basically, we run it through a mincing machine which is a soft meat separator,” said Schafer.

The meat is then ground up much like beef and nothing is wasted. All the bones and tendons that are removed is used as organic fertilizer.

In a structure next to the fish processing plant, a large machine the Schaefers call “the human body” digests the discarded bones, skin and tendons. Enzymes much like those found in the stomach break down the leftovers to create an organic liquid fertilizer.

And business has been good. Schafer says over the last six years processing of Asian carp has more than doubled to about 15 million pounds each year. And they are in the final stages of research and development on several new Asian carp-based products, including hot dogs.

It's something the company hopes will open the door to Asian carp for many skeptical consumers.

“The toughest challenge is changing the perspective and just getting people to try the fish,” said Schafer.

The company is fully invested in marketing Asian carp products like salami, bologna and even Asian carp jerky. 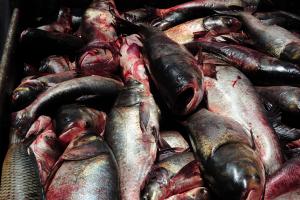 At the Taste of Chicago, the city's largest food festival, the Illinois Department of Natural Resources, working with its partners, has found a surefire way of getting people to try it -- by grilling it up and giving it away.

“You just mention the word carp and people make a face first, and then I convince them to try it, and then they go into the store and buy it,” said Dirk Fucik, owner of Dirk’s Fish & Gourmet Shop.

“It's really fantastic. It's really well seasoned and it's moist. It's yummy. People should try it,” said tourist Sandra Mehl.

In case it catches on, scientists are also studying the long-term prospects of keeping up with potential demand.

James Garvey is the Director of the Center for Fisheries, Aquaculture and Aquatic Sciences at Southern Illinois University. For the last year, Garvey has been sailing the Illinois River and literally counting Asian carp.

Using sophisticated equipment, much like the sonar on a submarine, the team is scanning the waters.

The SIU research is important for commercial fishermen because knowing how many fish are in the water is a good indicator of  how sustainable an Asian carp business could be in the long run.

“If there’s not enough fish out there, nobody's going to invest any money in it,” said Garvey.

Garvey and his team are just beginning the second phase of their research, measuring exactly how many pounds of fish are in the entire river.

“We're going to get a much better snapshot of the biomass of fish that are in the entire Illinois River all the way up to, actually this time around, to the Chicago area,” he said.

The hope is, that by the end of this year, researchers, government agencies and commercial fisheries will each have a better sense of their role in keeping Asian carp out of the Great Lakes by perhaps putting it on your plate.