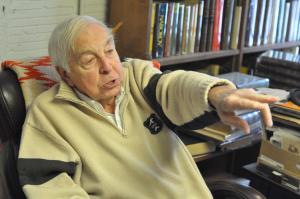 At Bookman’s Alley, the Evanston mainstay, the decorations—the top hats, the model ships, the presidential busts—are almost as important as the books. Toy airplanes are perched atop bookshelves, across the hall from a 19th century printing press.

When owner Roger Carlson opened the store more than 30 years ago, he wanted to finally open a used bookstore that didn’t have the "same atmosphere as a soup kitchen," he says.

"I was dressing the set, if you think of my shop as a presentation,” he says. “There are many fine used bookshops, but they tend to be pretty much devoted to displaying the books.”

Carlson likes to keep the decorations thematic. In the Western literature and history section, for example, “there’s a western saddle, and eight or nine hats and spurs,” Carlson says. “Everything but a cowboy sitting there, shooting at beer bottles.”

The creative decorating is part of why so many frequent the shop and why, as the store prepares to close in the next month or so, so many are interested in taking home a piece for themselves. Carlson says he’s holding on to most of it until the very end, but price tags have started popping up on gold bird figurines ($90) and black top hats ($85).

Carlson says declining sales at brick-and-mortar bookstores and recent health problems forced him to close. He’s been promising to close the store “soon” since December, but it’s taken him longer than he expected to liquidate his inventory. 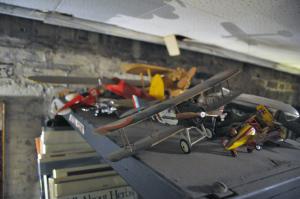 Formerly an ad salesman at National Geographic, Carlson opened Bookman’s Alley to turn his love of books into a career. At first, desperate for inventory, he put his personal collection into the store.

“When I opened up the shop, any book I owned went in there too, to help me make a living,” he says. “I was book poor, I guess you would say.”

Carlson bought most of his thousands of books at estate sales at North Shore homes.

“[And] a lot of the artifacts and works of art came from those weekend trips,” Carlson says. “My idea was to make the store more comfortable.”

With most of his original collection absorbed into the store’s stock, the only books Carlson plans on keeping once the store closes are those signed by writers who have visited the shop. And once the store closes, Carlson expects he’ll have more time to read for pleasure again, something he used to do from behind his desk at the front of the store.

“But the good-byes are taking up the time I would have spent reading,” he says.

Carlson has been saying the store has been closing "soon" for months, but now expects to close in July. Jay Shefsky has more on Chicago Tonight at 7:00 pm.

Visit the image gallery below for more photos of Bookman's Alley.