Dratch spent about a decade in Chicago improv theaters before moving on to New York. She started improv in college, playing warm-up games. Coming up with a poem about money, Dratch came up with, "I'm so rich it's no surprise, when I'm tired, I get Gucci bags under my eyes."

I didn’t feel like I had thought of it. It’s a sort of flow that happens when you are completely in the moment and not getting in your own way. Not trying so hard, no planning ahead, just getting out of your own head and letting the magic happen.

We spoke with current Second City mainstage actor Tim Baltz to learn more about that realization and his own improv experience.

How soon after you started did you relax and let lines come to you like that?

It was probably in the first class I ever took, a high school improv class. You’re trying so hard, you’re forcing things a bit. I had a moment when I was in a character, and the note from the director was to forget you’re in a scene. And the line came out and people laughed.

Is that the trick? Is it just to believe what you’re doing? It’s this weird, optical illusion or mind trick you’re playing on yourself. You’re less worried about getting laughs. It’s going to seem honest and let the audience invest even more.

Have there been moments where you’ve had to save another performer or vice versa?

That’s the power of what we do. In life, we define ourselves in negatives. In improv, it grinds everything to a halt. It kills the momentum. It’s the power of the "yes and." If you honor the mistake, you make them look like a genius. It’s so tempting to want to call that person out. But that only yields one laugh.

How different is Second City, which has a lot of sketch work, from iO which is almost entirely improv?

It’s both and it’s everything in between. In the show we’re running right now, there’s more created through improv than I’ve ever been a part of. If we need certain parts of a scene to improve, the director will open it up to improv. "What if the doctor is a professor and he’s late because his wife’s in the hospital?" Or a scene will be scripted 60 percent, and you’ll improv until the stage manager decides to pull the lights. That's called an open out. During the actual performance for some scenes, we don’t know when the lights will be pulled.

View some of Dratch's most famous sketches, and read an excerpt from her book, below: 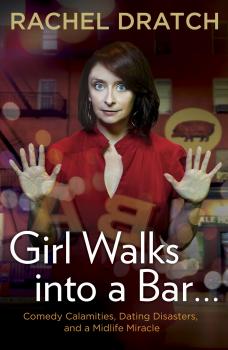 I had always had a problem with Nice Guys in the past. I didn’t know it at the time, but it was my problem. Well, Nice Guys, hear ye, hear ye: I paid for it dearly. I think it all started in eighth grade. It may be a common teenage girl trait to go for a real asshole. Did I watch too much Happy Days as a child? I did have socks with Fonzie on them in fourth grade that were my pride and joy. Did I learn everything about boys from a guy who snaps his fingers and several nameless girls come running to him, not minding that they aren’t the only one and will have the light of the Fonz shining on them only for mere moments? Somewhere in my brain, “nice” did not equal boyfriend material. What was sexy about nice?

In eighth grade, I had my first encounter with a nice boy who liked me. Chris was a gem. To ask me out, he sent me a singing telegram through some service that would call you up and sing the “telegram” to you on the phone. I still remember the words.

Excuse me if I’m shy

But on you I’ve had my eye

Please accept a date with me

At least give it a try

You know it would be great

If you’d accept this date

If you will be my date!

I was flattered, I was tickled. I genuinely liked this guy. I called him up and said yes. I think that was the first boy who ever asked me out. Well, except for this guy named Matt in seventh grade. We “dated” for one week until he broke up because I was “spending too much time with my friends.” The funny thing about Matt was, he left our town soon after eighth grade, but when I was at Dartmouth, I saw his name in the class below mine. I asked him—“Are you Matt who used to live in Lexington?” He said yes, but he had absolutely no recollection of me and didn’t seem at all amused by my attempt at junior high nostalgia. I think he gave me a blank stare and a grunt. Throw that onto the Dartmouth pile.

But as for Chris, the first Nice Guy, the Nicest of the Nice—I don’t quite remember if we went on a date or we were just “dating.” I think we were kind of seeing each other although we had no physical contact whatsoever. This was a simpler time. Or I was just a simple girl. Once we were at a “boy/girl party”—that’s what we called them back then; these days they are probably called “blow-job parties”—and he asked me if I wanted to “take a walk.” Code for making out. I said no! I knew nothing of making out. I think I was just scared. I didn’t want to. And besides, he was nothing like Fonzie. Where was his swagger, his underlying adolescent boy assholery? It wasn’t there. He played the trombone. He would go on to Haverford.

I know we went on one date. Again, I was terrified. I didn’t know how to be alone with a boy. So what did I do? I brought a friend. To the naked eye, I was just being an annoying junior high school girl, but again I was driven by fear. His dad picked us up and drove me and my friend and him to the Burlington Mall. I think I bought a Wiffle ball.

Cut to, now we are juniors in high school, long after our awkward junior high breakup, which consisted of me coming back from the summer and saying I thought we should break up (even though all we ever did to “date” was chat on the phone) and then ignoring him because of my own massive awkwardness. I was in a play, and after the show, Chris gave me flowers with a note that said “from your not-so-secret admirer.” The Nicest of the Nice was back.

We didn’t run in the same crowds, per se. I was generally in the smart classes, but like I said, I hung out with more the jock/party-in-the-woods crew. (Fun Fact: Many of them are named in the “Sully and Denise” sketch we did on SNL with Ben Affleck.) I bumped into Chris in the hallway soon after the flowers incident, and he asked me out on a date. By now we were sixteen or seventeen, but I may as well have been thirteen with my level of comfort in dating. Then came the moment in my life I wish I could take back. I’m sure there’s more than one, but I think this one haunts me because I was young. It’s the sort of moment from your youth that you wish you could go back with your adult brain and fix for yourself and, more importantly, for the injured party.

Lest you get the wrong picture, Chris wasn’t only Nice. He wasn’t some milquetoast character from the movies. He was really smart, and he was funny too and he was a cute guy. He called me up to set up our date. By now, my thirteen-year-old fear brain had taken over and I wasn’t looking forward to the date. I really don’t know why. Because he showed such fervent interest in me? Because I needed that danger or swagger in him or a feeling of inferiority in myself to feel interested? When he called to set the date up, though, he was turning on the charm. He had given a lot of thought to this and he suggested dinner and a movie—dinner at Bel Canto, one of the Italian restaurants in town. This was the classier joint with white cloth tablecloths, a step above Mario’s, which had vinyl red-checkered tablecloths. I remember he said that we could get a romantic table in the corner or something like that, a concept that sent me mentally fleeing. In the middle of this call, the other phone line rang. I was on my parents’ phone with Chris and said, “Could you hold on a sec?” and picked up the “kids’ line”—the ancient equivalent of call waiting. It was my friend Eve. “Eve! I don’t know what to do! Chris is on the other line and he’s talking about this date. He’s making it all romantic and stuff. What should I do? Now I don’t want to go!” I don’t quite remember the words but it was something along those lines. “He’s talking about a romantic table in the corner! Oh my God!” 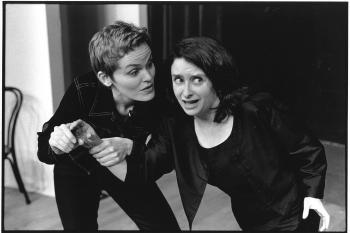 I flipped back to Chris to continue begrudgingly making these plans. “Hi. I’m back.”

“Hi. You know, you can hear through to the other line on this phone.”

My mind didn’t comprehend that this could be true. What was he talking about? Was that really possible? In a slight panic, I went forward, not addressing what he had just said at all. Here’s where I wish I had some adult judgment working for me and had actually addressed what had happened.

I awkwardly hurried off the phone with Chris. I discovered in the next few days after running some tests that indeed, through a glitch in the phone system, you could hear the other line. I didn’t mention it to Chris, apologize, explain, attempt to make an excuse, anything. I simply ignored it. We did go out to a movie and it was hurried and perfunctory. By then I was at full dread mode, only compounded by my gaffe. We went to see Airplane 2 and didn’t go out to dinner before or after. I was treating it like an unpleasant appointment I had made and just had to get through.

Class act that he was, he never held my immaturity or rudeness, depending on how you want to frame it, against me. Our senior year, he signed my yearbook. I was with my friends after school, hanging out on the benches, when I sat down to read what he wrote. It was the first time I can remember crying not out of sadness but from sweetness. This is what he wrote:

“Rachel—There was a time when I would have done anything for you, and I mean anything. I wanted to be, and I guess I still do, your Errol Flynn, Cary Grant, and Indiana Jones all rolled up into one. You are a truly beautiful person. You will wow ’em wherever you go. Remember that scene from Raiders of the Lost Ark where he lassos the girl and pulls her into him? Well . . . that’s what I’d like to do with you.”

I know. I was a damn idiot.