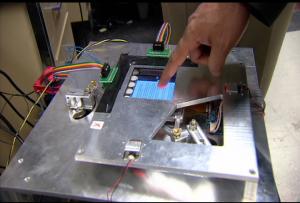 Imagine a game of Angry Birds in which you could actually feel the tension of a slingshot before propelling a squawking fowl into a group of thieving pigs.

That’s exactly the kind of ‘feeling’ researchers hope to add to touchscreen devices one day.

“Touchscreens have visual displays behind them and they track where your finger is, which is how they work. But you don’t feel anything. You just feel the glass,” said Michael Peshkin of Northwestern University’s Mechanical Engineering Department. “And there’s so much capability to have some haptic feedback from the glass.”

Haptic technology, or haptics, takes advantage of tactile feedback to simulate what something would feel like using sensory vibration, motion and forces to simulate touch.

Peshkin illustrates the point with a demonstration of flat keys on a glass panel that feel real because of the technology.

“So, I can feel the boundaries of those keys pushing me into the nearby key,” he said.

It’s the difference between feeling the texture and ridges on the keys of a piano, as opposed to the flat, visual keys on a touchscreen. 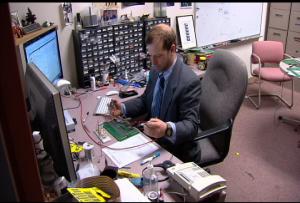 The two founded Tangible Haptics, LLC two years ago to bring true haptic feedback to touchscreens beyond just vibrations like the ones caused by pager motors.

One device in the lab is made up of a piece of glass and a conductive but transparent layer of metallization that when electrostatically charged can change the stimulation on the fingertip.

As Peshkin runs his finger across the plate, you can actually see the finger reacting to the simulated feedback in the way that it slides and hits virtual obstacles or clicks on the plane of the glass.

The obvious question is what’s actually causing the finger to react and feel those variations. 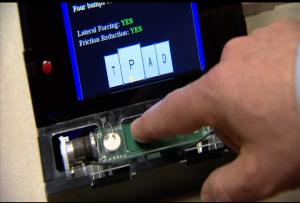 “It’s the amount of force that’s between your finger and the glass,” said Peshkin. “When we turn on that electrostatic attraction, your finger is sucked down because the positive or negative charge of the conductive layer pulls down on the finger on the opposite charges in your finger.”

The research so far has allowed Peshkin and Colgate to simulate the feelings of toggle switches and keys, as well as friction and directional pressure.

“What we’re trying to do is vibrate that piece of glass in a certain way so that as you put your finger on it, it actually can feel more or less slippery,” said Colgate.

“The vibrations are ultra-sonic, which means they’re happening at such a high frequency, you shouldn’t even be able to hear them and you certainly can’t feel them. But what they do is they cause the glass to kind of bounce like this up against the finger, maybe 20,000 to 30,000 times per second. And that’s enough to kind of keep the finger almost off the glass most of the time, so that when you move it can feel very slippery. It feels kind of like if you can imagine an air hockey table,” he said.

The key to the technology rests in tiny ceramic discs called Piezo-electric actuators. 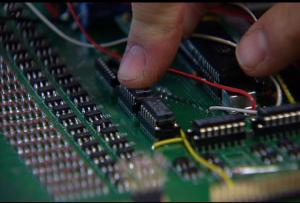 A voltage put across the discs causes them to expand or contract at frequencies that create resonance or oscillations that cause the glass to move up and down. That affects changes in the friction of the touchscreen.

And while feeling what you see on the touchscreen is possible, tasting remains elusive. Researchers say licking these touchscreens won’t leave much of an impression.

“This is purely a mechanical effect,” said Colgate. “This is just vibration, and so I think you would have less of an effect on your tongue because your tongue is wet.”

Still, Colgate and Peshkin say the practical applications of the touch technology are endless, and their hope is to bring touchscreens to life right underneath your fingertips. 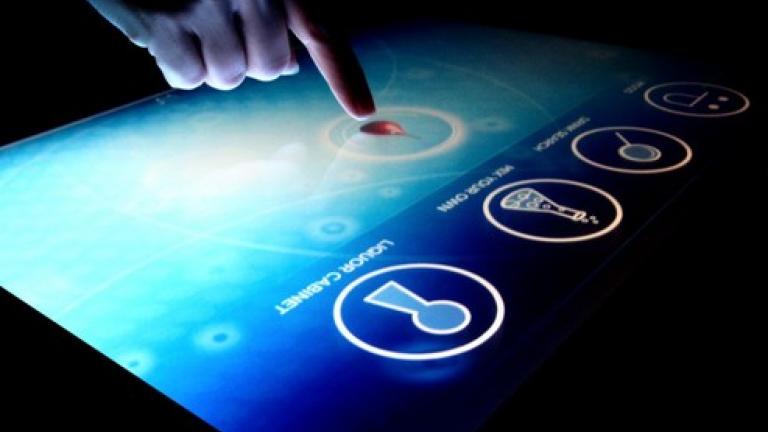