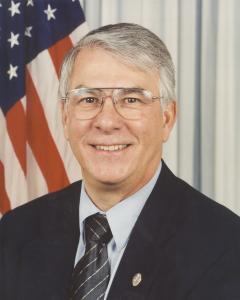 Donald Manzullo touts himself as the true conservative in the race for Congress in the 16th District. He is running against Adam Kinzinger, a Tea Party freshman in Congress, endorsed last election cycle by former vice-presidential candidate, Sarah Palin.

This race presents an interesting dynamic because both Manzullo and Kinzinger are incumbents. While Manzullo is the incumbent of the 16th District—and has been since his election in 1992—Kinzinger is presently representing the 11th District. But because the districts have been redrawn since the Census, he’s decided to run against Manzullo.

With no Democrats seeking election, whoever wins the primary will be the 16th District’s next congressman. So what do the constituents of the 16th District want: a veteran conservative who has served on the Committee on Foreign Affairs, or a fresh-faced Tea Party congressman? Chicago Tonight spoke with Rep. Manzullo to find out. And don’t forget to watch Rep. Manzullo alongside Rep. Kinzinger for a special candidate forum on March 12, 2012, on Chicago Tonight at 7:00 pm. Excerpts:

1) What are the main issues in your district?

2) The Illinois Tea Party backed you. What’s your reaction to that?

The Illinois Tea Party represents mainstream conservative Republicans. They’re upset with the egregious spending in America. They recognize that I’m the one true conservative in this campaign based on the examination of the voting record.

3) Your opponent, Adam Kinzinger, out-fundraised you in the fourth quarter. Does that worry you?

Well, I out-fundraised him in the third quarter. The important thing is he has only a little more than $100,000 more at the end of the quarter than I did.

4) This race is interesting because there are two incumbents. Tell me about that dynamic.

I represent 44 percent of the new district and he represents about 31 percent. Twenty-five percent of his current district is in Jesse Jackson, Jr.’s redrawn district, where he lives. We encouraged Adam to take on Jesse Jackson, Jr. because that’s where Adam lives. If he wants to be a dragon slayer, he should’ve to taken on Jesse because he is vulnerable because of Ethics Committee investigations. If Jesse lost in the primary, it would be a rematch between Adam and Debbie Halvorson, who Adam beat by a big margin in 2010. But he decided to run in the 16th District, and I feel very comfortable in the 16th because I have a very extensive agriculture, small business and manufacturing background.

5) Is it awkward running against another incumbent?

Well, it’s always awkward running against an incumbent Republican. But it’s not about what someone says but what’s on their record. I’m the strictest spender, I spend less than Adam does. He had an opportunity to end Nancy Pelosi’s earmark, for example, and he voted against it. It’s documented all in the votes. He’s not the conservative he touts himself to be, based on his voting record.

6) Do you think you’ve earned reelection as a nine-term Congressman?

I do. And the reason for that is that I continue to work on manufacturing issues that affect not only our congressional district, but also nationwide.

7) What do you see as your major accomplishments?

It’s mostly in manufacturing. There’s a 9 percent tax deduction for any manufacturer who makes products in this county. I’m responsible for that law, which is applied to all entities including moms and pops. Second, I stopped Congress from having a special tax on foreign companies. Third, I formed a coalition and spent two years working on section 17c of the Export Administration Act and, it opened up foreign markets for billions of dollars worth of airplane parts.

8) Why you, instead of Adam Kinzinger?

9) Do you think Kinzinger did a good job as a freshman in Congress?

He’s judged by his voting record, and his voting record shows he’s no conservative. You look at a person and where he received funding. He’s a nice guy; I like him a lot and admire his military record. I don’t know of any particular accomplishments he has made, but he should be judged by the way he voted and he votes moderately.

10) What are three words you would use to describe yourself?