A new Chicago Fire Department Fire Commissioner was appointed on Thursday, in the wake of Wednesday’s resignation of current fire commissioner Robert Hoff.

Commissioner Hoff retired after 35 years of service with the Chicago Fire Department.

“Firefighting is a fraternity, a fellowship, and most of all, a calling,” said Mayor Emanuel. “There are few people who have pursued that calling with more courage than Robert Hoff. I’m confident that Jose will carry the values you have forged for the next generation, as a department and as a City.”

Hoff resigned on Feb. 14, 2012, the 50th anniversary of the day his father, Battalion Chief Thomas Hoff, fell in the line of duty. 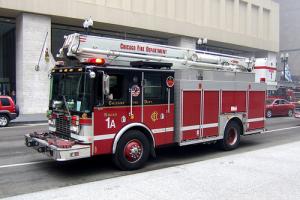 Commissioner Hoff has received the Carter Harrison Award twice during his career, in 1992, for rescuing two elderly citizens during a gas explosion, and in 1997 for rescuing twin brothers from a burning building.  He was honored with the State of Illinois Award of Valor in 1998, the Hundred Club of Cook County Award of Valor in 1992 and 1997, as well as several honorable mentions.

Jose Santiago is currently the Deputy Fire Commissioner, Bureau of Operations at the CFD. Santiago has also served as Executive Director of the Chicago Office of Emergency Management and Communications (OEMC) from March 2010 to June 2011.

Previous to his appointment as Director of the OEMC, Santiago served as Assistant Deputy Fire Commissioner (ADFC) for Fire Suppression and Rescue for the CFD, which he joined in 1979. ADFC Santiago’s responsibilities included directing and managing 4400+ uniform members, along with 250 pieces of apparatus.

Santiago served in the United States Marine Corp for over 31 years, both in active duty and the reserves. He worked his way through the ranks from Private to Commanding Officer of H & S Company, 2nd Battalion, 24th Marine Regiment 4th Marine Division. As the Commanding Officer, he was responsible for the training, directing and supervision of 253 Marines. He served in Operations Frequent Wind (RVN), Desert Shield and Desert Storm (SWA).