The Science of Fighting Fire 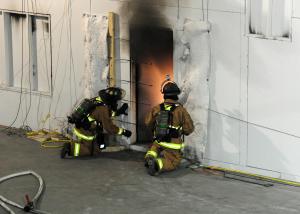 Each day, firefighters put themselves at risk to battle blazes and save lives. But with changes in the way homes are built and the materials housed inside, fire departments are dealing with dangerous new challenges in fighting modern fires. In tonight’s edition of Scientific Chicago, we go inside a groundbreaking fire research project aimed at improving firefighting tactics and reducing fatalities and injuries.

Inside a research facility at Underwriters Laboratories in Northbrook, researchers are preparing to set a 3,200 square foot building on fire.

The structure mimics the layout and furnishings inside a modern home with an open floor plan.

“Modern homes are bigger and secondly there’s much more synthetic material in the homes than there was say 20 or 30 years ago,” said John Drengenberg, Consumer Safety Director at UL. “Synthetic materials burn hotter and faster, so the fire spread is completely different than it was back then.”

According to the National Institute of Standards and Technology, in 1970 residents had about 17 minutes to evacuate a home safely after a fire was started. Today, that window of opportunity has been reduced to about three minutes, due in part to petroleum-based home products, like furnishings and open floor plans. 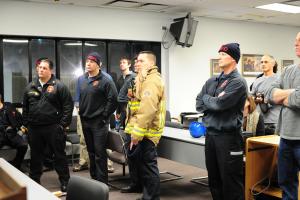 “When I came on the job over 30 years ago, they said to us the fires today are different because of plastics, and it is as true today as it was 30 years ago. There's more plastic,” said Peter Van Dorpe, district chief of the Chicago Fire Department who is currently in charge of firefighter training.

“We are making these buildings tighter, we are making them airtight to conserve energy. And then, on top of that, we take all the redundancy out of the building itself so the structural components of the building are lighter weight than ever before. This is a recipe for disaster from a fire standpoint, and so we need to understand all these things coming together and how that’s impacting the fire fight and what we need to do differently.”

The research funded by FEMA and the Department of Homeland Security aims to do just that. Working with fire departments from across the country, UL has been designing the experiments in conjunction with fire officials to answer the most pressing questions.

“Each of these junctions is a thermocouple. And it measures the temperature. So, we want to see how hot it is on the floor versus how hot it is all the way up to the top,” said Drengenberg. 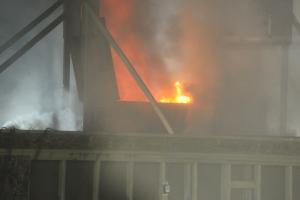 Cameras record what’s happening on the inside of the home as well as critical ventilation points from the front door to the rooftop.

Over the course of two months, UL with conduct 17 controlled burns where they’ll collect thousands and thousands of data points that will help them with research that will determine how to fight fires better and safer.

“One of those most important lessons is water first, always and last,” Van Dorpe said. “Getting water on the fire is one of the most critically important things; this current series is testing different ventilation scenarios.”

Up on the rooftop, researchers simulate what happens when firefighters ventilate the building, which is done in the real world by cutting a hole in the roof.

“We just have a trap door here. At the right time when the researchers believe they want the data, they will open these trap doors, simulating firefighters actually cutting a hole in the roof and see how that affects the ventilation,” said Drengenberg.

Historically, firefighters always thought that when they broke out windows or cut out roofing to ventilate a building, that immediately cooled the air. But Van Dorpe says the research indicates that’s not the case.

“What these experiments are helping us realize is the first thing you do when you ventilate the building is you cause these temperatures to go up,” Van Dorpe said. “Because there’s so much fuel in the building now, and that building is oxygen-starved, and we open up, we’re giving it the oxygen it needs. So the temperatures are gonna spike and if we’re not prepared right now to put water on the fire, we’re gonna lose control of this incident.”

Fire officials say the key to discovering practical applications to the research that’s being conducted is making the science accessible to firefighters and their departments.

“We literally have a seat at the table. The fire service, firefighters are at the table helping to design these experiments,” said Van Dorpe. “They are asking the questions that need to be asked, so that researchers are giving us the answers they need. It’s not theoretical or hypothetical anymore, it’s very, very real.”

They say the ultimate goal is to bring the science of the laboratory into the real world where the street firefighter can use it to save lives.