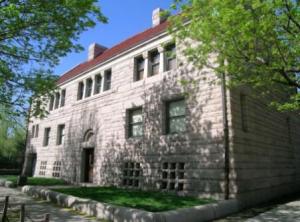 History and architecture combine in one of the more controversially beautiful buildings of its day at the Glessner House Museum. Built in 1886 at 1800 South Prairie Avenue, the Glessner House was designed by architect Henry Hobson Richardson, whose work proved influential over modern architects such as Louis Sullivan and Frank Lloyd Wright.

The Glessners worked closely with Richardson on the house, asking him to build them a home that would be spacious for their growing children while still holding onto the “cozy” feeling of their former residence on West Washington Street. On December 1, 1887, they moved into their new home and stayed there for 50 years. Upon his death, John Glessner donated the house to the Chicago Chapter of the American Institute of Architecture in order to preserve and share the architectural achievement.

The Glessner House Museum upholds his wishes by providing guided tours, lectures, and other special programs about this National Historic Landmark.

The following is an excerpt from a document detailing the history of the house John Glessner wrote to his children, George and Frances, in March 1923.

The description of this home may give some indication of how a man of moderate fortune would live in the latter part of the 19th century and the earlier part of the 20th — an average man with a modicum of this world’s material possessions, but by no means rich, except in family and friends.

The house was built in 1886. On the morning of June 1st of that year, I sent word from my office to your mother that wheelbarrows, spades and picks had just then been sent to the site of our proposed new home, that digging would begin at one o’clock, and if she would take Frances and nurse, etc. in the carriage, and let George drive my horse and buggy and stop at the office for me, and all of us reach the site soon after twelve o’clock, you two children — George then fourteen and a half years and Frances a little more than eight years old — might throw the first soil from the foundation trenches. And that we did.

Just eighteen months after that to the day, we occupied the completed house. Because of its plan, we were able to move all of our household belongings through the courtyard entrance from the alley, and place them in the house before our neighbors suspected even that [we] were about to move.

These were good, kind friends of ours, these neighbors, the finest and most considerate that any one ever had, and they welcomed us warmly — the Shortalls, the Spauldings, Harveys, Hibbards, Kelloggs, Dexters, Sturges, Walkers, Otises, Pullmans, Armours, Doanes, Keiths, Fields, Hendersons, Clarks, Grays, Allertons, etc., etc., and many others of the same class who came afterwards. Farther south on the Avenue were the Spragues, Bartletts, Hutchinsons, Judahs, Hamills, Lancasters, Gettys, Hugitts, Keeps, Haskells, Henry Blairs, and others, and on the Avenues both east and west were other dear friends.

We slept in this house for the first time on the night of December 1, 1887, and never in the old house after that. The fire on the hearth typified the home, so we carried the living fire from the hearthstone in the old home at Washington and Morgan Streets, and with that started the fire on the new hearth, accompanied by a little ceremony that I don’t know if you remember or not; but the old home had been pleasant with many intimate social gatherings — for your mother had ever the genius for generous friendships and hospitality, and the life in the new home must be a continuation of the life so happily lived in the old, and carry on without break its customs and traditions. And so it was with the fire: the old did not go out, the new merely continued its warmth and glow.

Excerpt from a document written in March 1923 by John J. Glessner to his children