The Game of Kings - on Bikes

It was first played more than a hundred years ago and was derived from a centuries-old sport. But today, bicycle polo is once again emerging as an alternative to the traditionally played polo on horseback.

In fact, one of the best bike polo teams in the world happens to be right here in Chicago.

In Garfield Park on the city’s West Side, two tennis courts have been walled off and converted to look like a hockey rink, minus the ice.

It may seem odd, but this is the playing field for a sport that's probably unlike anything you've seen before.

“It’s usually like, ‘what do you do?’ Well, I play bike polo,” said Joe Panizzo, one of three members of Machine Politics, Chicago’s very own bike polo team.

The sport has recently enjoyed a resurgence in popularity. 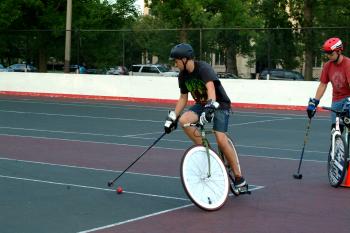 The World Championships were held in Berlin last year, with more than 100 hundred teams from 14 countries competing.

“That was pretty heartbreaking,” said Matt Lane, the newest team member of Machine Politics. “They beat us in like five minutes so at least it was short and fairly painless.”

“We’ve been going to tournaments across the country and the world representing Chicago,” he said. “It’s been a great time hanging out with these guys.”

Bike polo is an economical alternative to the more familiar polo played on horseback. Arguably one of the world's oldest sports, most historians say horse polo began in Persia over 2,500 years ago.

Known as the “Game of Kings,” horse polo is mentioned in the Shanameh, a Persian national epic written in the 10th century.

This modern version of hard court bike polo began sometime around 1999 in Seattle, but its history stretches back to the 19th century.

Bike polo was even commissioned as a demonstration sport in the 1908 Olympic Games in London.

The game is played three-on-three, and begins with what is called a joust. If a player “dabs” or touches a horizontal surface with his or her foot, he or she has to touch a mark on either side of the court to re-enter play.

Players can only score by hitting the ball with the end of the mallet. The game ends when time expires or when one team reaches five goals.

The key piece of equipment in bike polo is the mallet.

The mallets are traditionally homemade. Usually, they are made from old ski poles attached to a heavy duty piece of gas piping. But they are getting more sophisticated as well.

Schultz is also the director of the North American Hardcourt or N.A.H., the governing body for bike polo in North America, and has seen the evolution of the mallet up close.

“Some people can do amazing tricks with it,” he said. “They can carry it in the air like you would with lacrosse, they can throw it whenever they want to.”

The bicycles themselves are modified to incorporate a racing bike's body with mountain bike-sized wheels. This allows riders to accelerate quickly with the benefit of a tight turning radius. Individualized wheel covers can be used to block shots.

No matter how large the sport grows, Schultz says the N.A.H. is dedicated to maintaining bike polo's communal atmosphere.

“Mostly what we do is community oriented,” Schultz said. “People that you know are putting you up when you travel; they’re putting the tournaments together. I think the thing for us to think about is that, as it gets big, it still is a community effort.”

Players come from a wide variety of sporting backgrounds.

“Hand-eye coordination is good. I played a lot of tennis which helps me with my shot,” said Panizzo.

“It’s incredibly awkward swinging a stick and riding a bike at the same time,” said Lane. “When a new person starts now, I think it’s a little bit easier to pick up, though it does take a bike background or sports background to feel really agile.”

With crashes not uncommon, sometimes game play can become a bit hazardous as well, which is why players wear helmets and pads.

But Schultz dismisses the danger.

“Yeah, it’s dangerous, but so is crossing the street,” he said.

To see more photos and get more information, visit the image gallery and links below.