Fordson: Faith, Fasting, Football follows a predominately Arab-American high school football team from a working-class Detroit suburb as they practice for their big cross-town rivalry game during the last 10 days of Ramadan, revealing a community holding onto its Islamic faith while they struggle for acceptance in post 9/11 America. Our own Ash-har Quraishi is one of the film’s producers. He joins us on Chicago Tonight at 7:00 pm, along with his producing partner and wife, Basma Babar-Quraishi.

Watch a trailer for the movie below.

The feature-length documentary film follows four talented high school football players from the working class Detroit suburb of Dearborn, Michigan as they gear up for their big senior year rivalry game during the last 10 days of Ramadan, a month when Muslims traditionally fast every day from sunrise to sundown. The film begins on September 11, 2009 and concludes at the end of Ramadan 10 days later. The story takes place at Fordson High School, a public school built by Henry Ford in 1922 that was once all white, but now attracts a 98 percent Arab-American population. As the Fordson team readies itself to play its affluent, cross-town rival, the film depicts a community that is desperately holding onto its Islamic faith while struggling to gain acceptance in post 9/11 America. 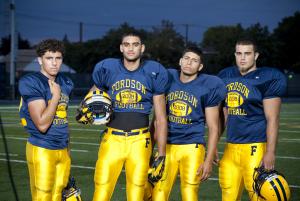 Fordson documents not only the players' outer struggle to overcome the hunger and thirst of fasting as they prepare for the big game, but also their inner struggle to reconcile their Arab heritage with their American birthright. It is an inspirational story of an immigrant community's resilience, that attempts to answer the question, "Who is an American?" Through the eyes of the team, their coaches, and their fans, Fordson offers an unprecedented glimpse inside the lives of a community that is home to the largest concentration of Arabs in any city outside of the Middle East, and their determination to hold on to the American Dream.

In many ways, the story of Dearborn's Arab immigrants is not unlike the stories of other immigrant communities before it. The first Arabs arrived in Dearborn over 100 years ago from Lebanon, and continue to trickle in to this day. Arab-Americans built businesses, became politically active, and became involved in local leadership positions. But as the film reveals, 9/11 shook the very foundation of a community that had worked for decades to build a safe, vibrant, prosperous place to raise their families.

Even as Dearborn's Arabs mourned the tragedy of 9/11 along with the rest of America, many recall how, within hours, they were made to feel guilty by association. Imad Fadlallah, principal of Fordson High School, remembers the scrutiny he saw in the media: "In a way you feel you're responsible, or they MAKE you feel that you are responsible. Somewhere in the blood trail, you're related to the people that were on that airplane whether you like it or not." As Dearborn watched the ramifications of 9/11 unfold on TV, the Arabs as a group hunkered down, bracing for a backlash.

The film portrays how a fear of the world outside of the safe confines of Dearborn may actually have contributed to the great success of the Arab community's growth and expansion. Children typically do not go away for college, and live with their parents until they are married. Family members buy homes next door to each other. In many cases, extended families live together in one home. "No way I'm leaving," says Quarterback Ali Baidoun, a senior, when asked about college. "I don't want to leave. I'm too comfortable here. I know how people are here and I wouldn't leave it for the world." 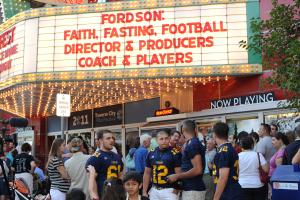 The story of Ali Houssaiky, a former Fordson football star and brother of star Lineman, Hassan Houssaiky became a case in point for a community fearful of the outside world. In 2005, Ali and his friend, Osama, both 20 years old, were arrested in Ohio on suspicions of terrorism after they purchased cell phones from a local Wal-Mart, which they planned to re-sell for profit. The men were held for ten days without any charges before being released on lack of evidence. Ali says he will never forget his family's devastation, and the extent to which his reputation was ruined. "It opened my mind, opened my eyes to what's going on in America," he says.

Fordson examines America's attitude towards Islam and Muslims and gets insight from past and present players to the racism they have experienced while playing football, from being called "Sand Nigger" and "Camel Jockey" to having fans on road trips wave the American Flag or wear turbans as they arrived at the stadium. Fordson also explores challenges the public school district has faced in addressing the needs of an overwhelmingly Muslim student body population, from changing the school calendar to accommodate for the Eid Holiday to providing "Halal" food via its lunch service to addressing the right of players to recite verses from the Quran on-field during pre-game warm-ups.

Fordson is a story not only of dreams shattered by the shadow of 9/11, but also of triumph despite it. One of nine children of an auto assembly line worker, star Wide Receiver Baquer Sayed dreams of securing a major Division I scholarship. He shyly shows us a box overflowing with recruitment letters letters from colleges. As his mother states, "This country gives us the opportunity where others don't. Our own country did not give us the opportunity…It would be a dream come true for him to go to a well known college like U of M."

Through the eyes of the team, their coaches, and their fans, we get an unprecedented glimpse inside the lives of a community that is home to the largest concentration of Arabs in any city outside of the Middle East, and their determination to hold on to the American Dream. As Fordson alum Brian Mosallam states: "We are the luckiest people in the world to be born and live in America."

Filmmaker Michael Moore comments on the film in the following video:

Watch an extended trailer of the film below.

Click on the audio player below to download the Fordson rap theme song, and check out a behind-the-scenes production gallery.