Preparing the Garden for Winter

With winter fast approaching, it’s time to clean up the WTTW garden and remove the remaining summer plants. The Organic Gardener Jeanne Nolan stops by to help our garden transition into the next season. 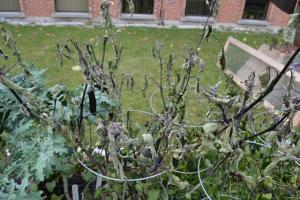 Like the majority of Chicago area gardens, our garden recently experienced a killing frost, which is when the temperature reaches 28 degrees Fahrenheit or below, according to Nolan.

The killing frost decimated the nasturtiums, eggplants, jalapeño peppers, sweet bell peppers, and tomato plants. All of those plants looked hearty and healthy as late as Halloween, despite the intermittent snow flurries and strong winds that day. Seeing all the shriveled plants was sad, especially since I knew a handful of those jalapeño peppers were so close to being ripe before the killing frost. But, I can’t be too upset since we had a longer season than I expected.

All of those plants, including their roots, were removed. Gardeners could leave the roots of the plants in the soil over the winter, though.

“You could cut the [plant at the base], and leave the roots in over the winter,” said Adrienne Detanico of The Organic Gardener. “This will help with soil erosion and compaction.”

Soil is filled with microorganisms that will feed off of the roots, she added.

The killing frost most likely came overnight on Saturday. While the frost killed the majority of our remaining spring/summer crops, there are some that will continue to produce a little longer.

“As we get into colder winter weather, people will notice their kale, spinach, and chard covered in frost in the morning. They may think the plants are dead, but they will warm up during the afternoon and pop up,” Detanico said. “They are cold, hearty crops. They’ll continue to survive until there are successive days with temperatures around 28 degrees or below, not just overnight drops.”

In addition to continuing to harvest the three varieties of kale, we will soon harvest the Brussels sprouts, rainbow carrots, and the remaining beets.

After the south garden bed was cleaned up, Detanico and Nolan aerated and mounded the soil in order to plant garlic.

“Set the soil at the level of where you would want it to be in the spring if you’re planting in a raised bed,” Nolan said. “In the spring, we’ll prep the soil again and aerate it, but we won’t be able to [prep] the soil again where the garlic has been planted.” 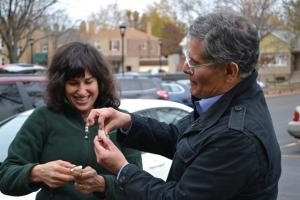 Nolan selected two types of garlic—Spanish Roja and German Music—to plant. After breaking apart a garlic bulb, Nolan planted a clove with the small stem facing up about 4-6 inches beneath the soil.

“Garlic requires the cold of winter in order to form the bulb,” Nolan said, as she continued to plant cloves of garlic about 6 inches apart from each other.

Garlic can be planted from mid-October through mid-November and will be ready to harvest by mid-July. If a gardener were to plant garlic in the spring, the resulting crop would be green garlic, not a bulb of garlic.

During their visit, Nolan and Detanico shut off the irrigation system to the garden beds, but that won’t hinder the growth of the garlic.

“Garlic will take in the natural precipitation,” Detanico said. “It will need water when the regular season begins.”

The crops growing in the season extension have been doing much better than expected. Rather than thin and harvest a handful now, we’ve decided to wait just a little bit longer to have one big harvest just in time for Thanksgiving.