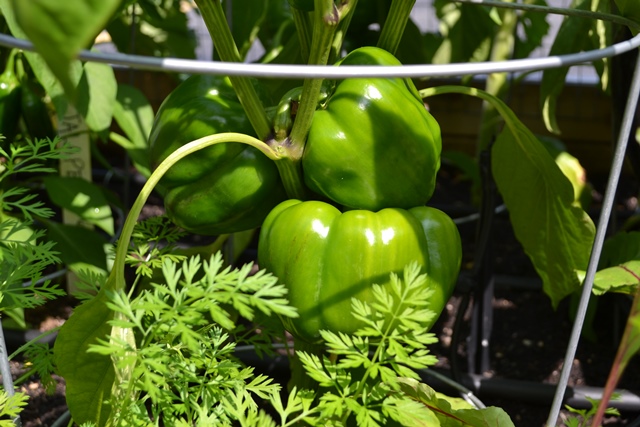 Midway into August, we’ve harvested many of our crops, but we are waiting for a few more to ripen including the sweet bell pepper plants.

Right now the plants are green and could be harvested, but Jeanne Nolan recommends waiting for them to change color.

Green peppers can be difficult for people to digest, Nolan said, adding her favorite peppers are ripened ones—red, yellow, and orange peppers.

The color change for the peppers could happen as early as the end of August, but it’s more likely that they won’t change colors until well into September.

“As long as the whole pepper is intact, I tend to leave it on the vine to ripen and change colors,” Nolan said. “If the flesh of pepper is compromised in anyway, for example, if it’s sunburned, then I would harvest it, and eat it when it’s green. If it looks healthy, leave it till it changes color. That’s my rule of thumb. Remove any yellow leaves on the plant."