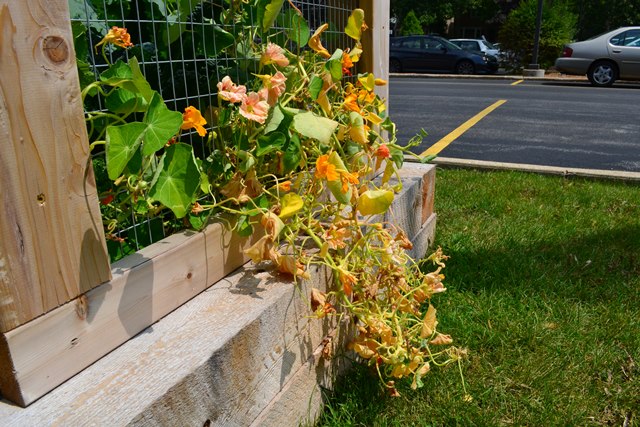 Jeanne Nolan and The Organic Gardener maintenance crew member Dani Hollis investigate what caused this plant to wilt. Nolan began the investigation by checking the soil.

Nolan and Hollis examined the plant, beginning with its roots, which Nolan said looked fine.

“It’s really just petering out at the end of the plant,” Nolan said. “It doesn’t seem like the whole plant is going down. We’ll start by taking off the dead part of the plant to try and figure out what happened.”

As she examined the plant, Nolan said part of the problem could be due to extensive pruning The Organic Gardener crew did during their last visit.

“There’s a little bit of a bend to them,” Hollis said, examining the roots and stems of the plant. “Maybe they were whipped around during that really windy day.”

“They are sensitive plants,” Nolan said.

While that could be true, both Nolan and Hollis agreed that multiple factors most likely contributed to the plant’s condition.

“During all my time gardening, there have always been mysteries,” Nolan said.

Fortunately, we could still save the plant but had to do some extensive pruning.

“If you notice any yellowing or some type of damage, you can follow that down to the stem all the way down and cut the plant there,” Hollis said. “It’s better to take care of it when you notice [an issue] so it doesn’t spread.”