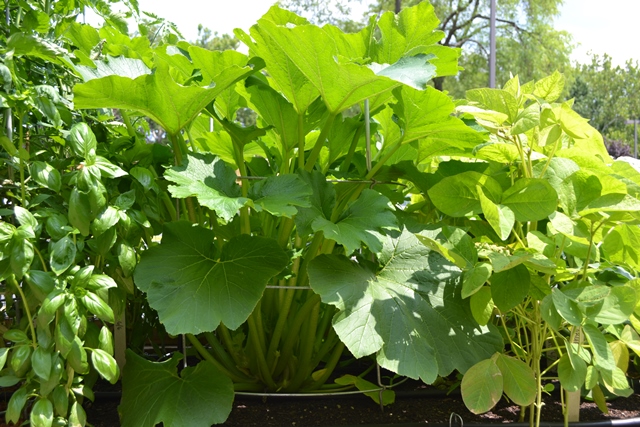 In early June, we planted four zucchini seeds, with the intention of only allowing one seed to grow in the garden.

At the time, I thought there was easily enough room in the garden for at least two zucchini plants (clearly the thought of an inexperienced gardener). Now, I see why we only have one zucchini in the garden; it’s enormous, taking up at least one third of the garden bed.

As I tended to the garden, I was joined by curious coworkers, who were shocked to learn that the monstrous plant we were staring at was only one zucchini plant.

Staring at the leaves, which are larger than my hand, I now understood why Jeanne Nolan had called zucchini plants “unruly.”

I also understood why she used a Texas Tomato Cage to grow the plant. As large as the plant is, at least it’s contained; I can’t imagine how the plant would’ve grown if it had free reign to grow wherever it wanted in the garden.

Moving the giant leaves, I was able to see several light yellow-orange buds growing from the plant. I’ll be keeping an eye out for the first zucchini to appear.