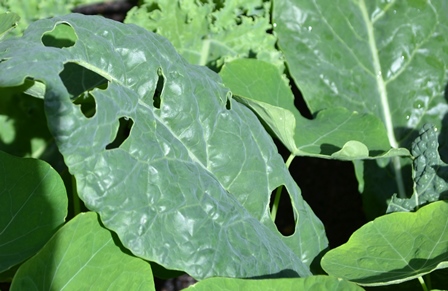 Last night, the Chicago area was pummeled with torrential rains and strong winds as severe storms swept through the area. The powerful storms brought down trees and power lines in some areas.

“There’s been too much rain,” Jeanne Nolan said. “In gardens without drainage, we see people losing tomatoes and other plants because all of the water is compacting the soil. It’s challenging right now because there is too much rain.”

Since our garden was built in raised beds, we don’t have an issue with flooding or drainage. But since the soil in our garden was so heavy due to the extra rain, we put our irrigation system on a rain delay for 72 hours.

“It’s important for gardeners to know you can’t control this stuff,” she said of the weather. “There’s not a whole lot you can do about it. … Every year, we never know what nature is going to do, and every year, it’s a different issue. This year is rain.”

In addition to last night’s rain, there were powerful winds, which in some areas got up to nearly 90 miles per hour.

“With a lot of wind and rain, plants are blown around,” Nolan said, adding gardeners should spend some time stabilizing their plants following the storm. “Bring extra soil around the base of each plant to make sure they’re really solid.”

“What I’m doing is called hilling,” Nolan said as she thinned beets and added extra mounds of soil around the remaining beets. “The beet part of the plant was exposed, so you want to cover it with soil.”

While the previous night’s storm disturbed the garden, that wasn’t the only damage control we had to do.

As we inspected our plants, we saw the entire life cycle of the cabbage worm in our garden from egg to larva to pupa to moth.

“You should check the undersides of leaves every day for eggs, larvae, and pupae,” Nolan said as she removed a tiny cabbage worm. “For the home gardener, it’s easy to do by hand.”

After removing the cabbage worm, Nolan smashed it and continued checking the Brussels sprouts along with the three types of kale in our garden. Once all of the plants were checked and harmful insects removed, Nolan applied a liquid garlic extract.

“This is used as a preventative,” Nolan said, adding if gardeners really wanted to or felt the need to they could use Bacillus thuringiensis, a natural and safe microbial pesticide. “I don’t like to use it, though.”

We finished our check-up with some light weeding.

“Be sure to get the entire weed, including the root,” Nolan said, adding if the weed is snapped off at the root it will grow back.