Heather Skeen has the kind of job that makes for an excellent icebreaker.

“I go to the Bahamas and collect bird poop,” said Skeen, a Ph.D. student at the Field Museum and University of Chicago.

The conversation starter typically meets with: “You what?” followed by: “Why?”

We’ll get to the “what” in a minute. The “why” can be found in a study just published in the journal Molecular Ecology, with Skeen as the lead author.

Turns out her work with birds, and yes, their poop, yielded some fascinating insights into the biology of migratory birds, and has broader implications in terms of the ways animals might adapt to climate change. 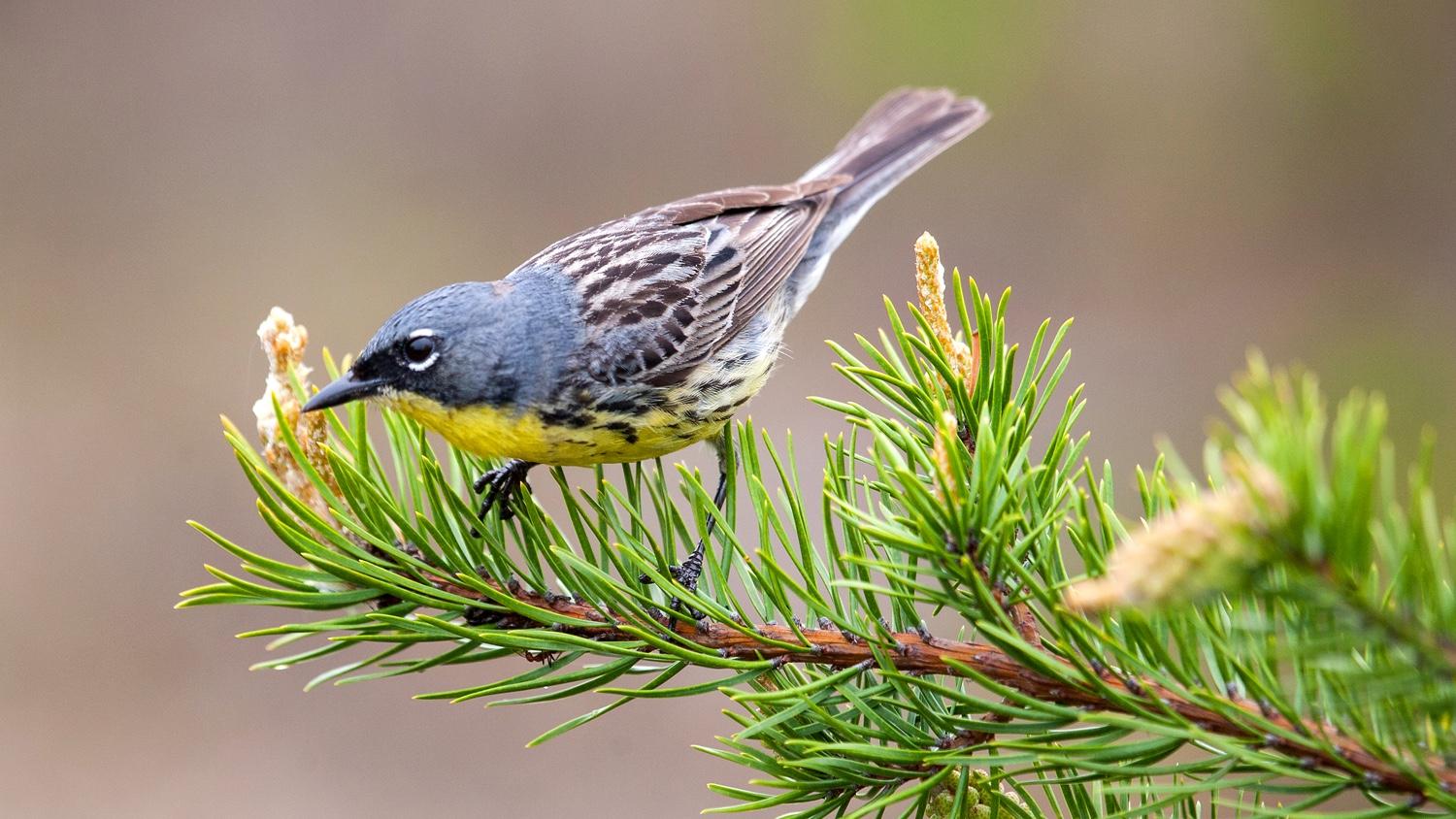 The rarity of the Kirtland's warbler and its highly specific habitat choice for breeding in northern Michigan made it an ideal choice for research. (Courtesy of Nathan Cooper)

Migratory birds are extraordinarily well-studied, Skeen said, but at this point, there are a lot of hypotheses and not a lot of answers.

The premise of her research was to look at the microbiome (aka, gut bacteria) of migratory birds to determine what, if any, changes occur when the creatures trade in their southern wintering grounds for their northern breeding grounds.

That’s where the poop comes in.

Since she wasn’t about to sacrifice birds in order to dissect their innards, examining their waste was the next best option. “There are trillions of bacteria all over the body: in the gut, in the esophagus, in the stomach,” Skeen said. “Poop picks up microbiome for the whole digestive system.”

Mentors suggested the Kirtland’s warbler as the ideal subject for her study. Once on the brink of extinction, the rare bird’s population is small enough and its habitat limited enough that it would be far easier to track on its migration than a more common, widespread species.

Skeen was able to piggyback her project on the long-standing work of Nathan Cooper, of the Smithsonian Conservation Biology Institute, who’s spent years researching the Kirtland’s warbler both in its winter home in the Bahamas and its breeding ground in northern Michigan. Cooper’s team has an established base on one of the Bahamas’ lesser-populated islands, and that’s where Skeen found herself in 2017 and 2018, looking for warblers to tag with miniature geolocators.

If that sounds like an amazing place to set up a temporary office, it was — to an extent.

“It was the nicest background I’ve ever had for work,” Skeen acknowledged, but not exactly a day at the beach. “It was also the most insect bites I’ve ever had.”

Skeen and her team of field technicians would hit the trail before dawn, trekking through the scrubby habitat Kirtland’s prefer, and search for warblers until the temperatures became unbearably hot. “There were days we didn’t find any birds. You’re walking for eight hours in the heat with nothing to show for it,” she said.

Given the scarcity of the Kirtland’s warbler, the bird’s comfort was prioritized over the scientists’ mission, said Skeen.

“I’d never worked with an endangered species before. We were extremely conscientious of the stress of the bird,” she said. “When birds were stressed, we’d let it go. The bird’s life was the top concern.”

Over the course of the study’s two years, she estimates they tagged 120 birds. Once a bird was fitted with a radio tracking device, it was placed inside a wax paper bag, where it would do its “business.” The warblers were then released, and Skeen would collect the fecal deposits from the bags.

That was phase one of the process. The second took place at the other end of the warbler’s migration, in Michigan. There, Skeen and her team would wait for pings from the area’s radio towers, and then fan out with handheld radio antenna to track the warblers they’d tagged in the Bahamas. The birds were recaptured to gather a second round of poop.

“One of the technicians put me in her phone as ‘Bird Poop Lady,’” Skeen said with a laugh.

It’s not a glamorous gig, but Skeen knew that when she switched years ago from the Field’s education department to joining its researchers. At the time, she’d approached one of the museum’s scientists about pitching in on a project and was asked how she’d feel about studying ectoparasitic chewing lice. “In my head, I thought, ‘Gross.’ But I said, ‘Sure.’” 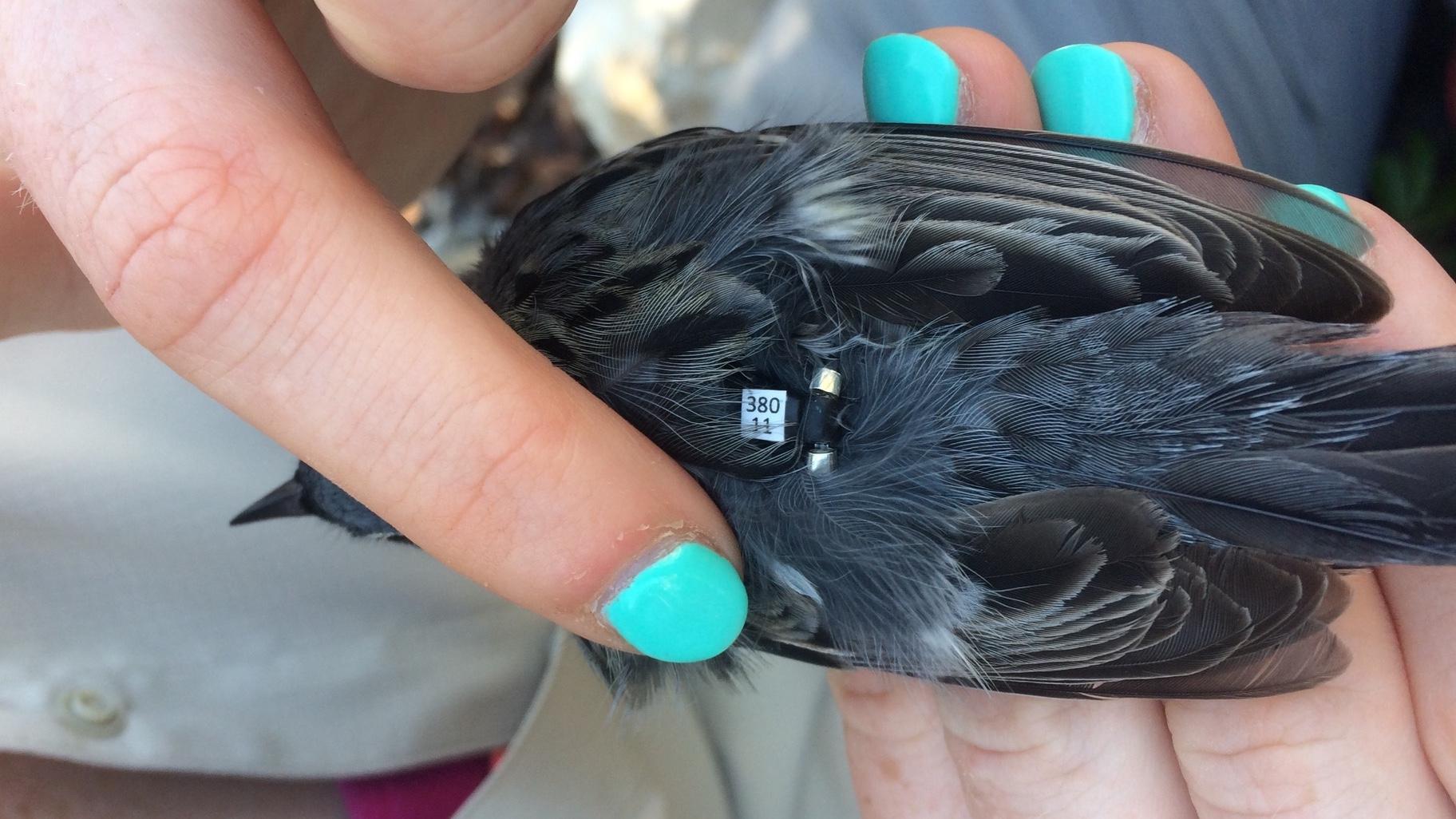 A warbler tagged with a tiny geolocator. (Courtesy of Heather Skeen)

Obtaining samples of anything from the exact same birds at the start and end points of their migration would have been unthinkable in the not-so-distant past, said Skeen.

“Ten years ago, there’s no way we could have done this. Tracking technologies are so much better,” she said. The same goes for the ability to sequence the genetic makeup of the birds’ microbiome, Skeen said.

At the project’s outset, she had no idea what she would find, Skeen said, but all of her hypotheses were based on findings for mammals, whose microbiome is generally tied to their species’ identity. So she assumed the warbler’s microbiome would remain consistent in its breeding and winter grounds.

After analyzing and interpreting all the data from the collected samples, she discovered the opposite: The bird’s gut bacteria was different in the two locations, influenced more by environment and diet than the species.

The results suggest the warbler’s digestive system has adapted to varying conditions in terms of weather and available food sources. The ramifications of what this could mean in the face of climate change are significant.

“Animals do evolve, but at a slow rate,” Skeen said, slower than the climate is shifting. “One way they could adapt more quickly is through their microbiome.”

Think for a minute about foods a given animal can’t digest, and what if that were to become their only option in nature? Or — not to diverge too far into the realm of sci-fi  — what if there were a nutrient-dense crop that required minimal resources and could cheaply feed the entire planet, but humans can’t process the stuff?

How migratory birds manage the trick of altering their microbiome, and whether it’s something that could be duplicated in other organisms, are questions Skeen has proposed to tackle in future studies.

Bird Poop Lady has her work cut out for her.

Note: This story was originally published on Sept. 29. It has been updated to include our “Chicago Tonight” discussion.