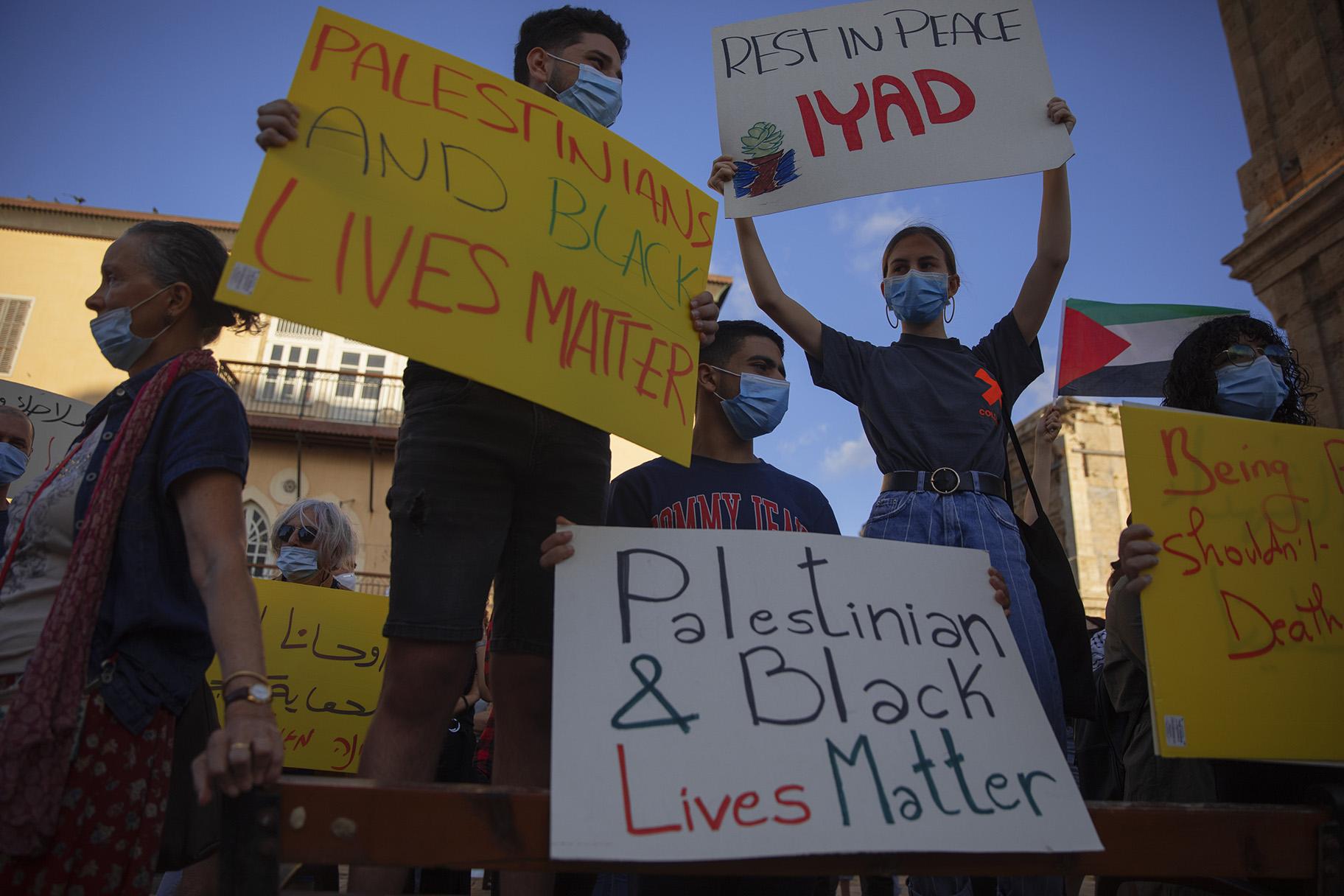 Protesters hold signs during a demonstration against the Israeli police after border police officers shot and killed Iyad al-Halak, an unarmed autistic Palestinian man, in the mixed Arab Jewish city of Jaffa, near Tel Aviv, Israel, after saying they suspected he was carrying a weapon, Sunday, May 31, 2020. Protesters gathered to protest the killing of al-Halak in Jerusalem and the killing of George Floyd in Minneapolis last week. (AP Photo / Oded Balilty)

WASHINGTON (AP) — U.S. officials sought to determine Sunday whether extremist groups had infiltrated police brutality protests across the country and deliberately tipped largely peaceful demonstrations toward violence — and if foreign adversaries were behind a burgeoning disinformation campaign on social media.

Investigators were also tracking online interference and looking into whether foreign agents were behind the effort. Officials have seen a surge of social media accounts with fewer than 200 followers created in the last month, a textbook sign of a disinformation effort.

The accounts have posted graphic images of the protests, material on police brutality and material on the coronavirus pandemic that appeared designed to inflame tensions across the political divide, according to three administration officials. The officials spoke on condition of anonymity to discuss investigations.

The investigations are an attempt to identify the network of forces behind some of the most widespread outbreak of civil unrest in the U.S. in decades. Protests erupted in dozens of cities in recent days, triggered by the death of George Floyd, who died after he was pinned at the neck by a white Minneapolis police officer.

Pandemic-weary Americans were already angry — about COVID-19 deaths, lockdown orders and tens of millions of people out of work. The pandemic has hit African Americans harder than whites in the U.S., and the killings of black people by police have continued over the years even as the topic faded from the national stage.

But there are signs of people with other disparate motives, including anarchist graffiti, arrests of some out-of-state protesters, and images circulating in extremist groups that suggest the involvement of outside groups.

Minnesota Gov. Tim Walz said Sunday that state authorities were hit with a cyber attack as law enforcement prepared to diffuse protests in Minneapolis and St. Paul, the epicenter of the unrest. He described it as a “very sophisticated denial of service attack on all computers.”

President Donald Trump, Attorney General William Bar and others have said the left-wing extremist group antifa is to blame. Short for anti-fascists, antifa is an umbrella term for far-left-leaning militant groups that resist neo-Nazis and white supremacists at demonstrations.

Barr on Sunday said the FBI would use its regional joint terrorism task forces to “identify criminal organizers,” and Trump threatened again to name antifa a terrorist group.

The Justice Department is also deploying members of the U.S. Marshals Service and agents from the Drug Enforcement Administration on Sunday to supplement National Guard troops outside the White House, a senior department official said. The official was not authorized to discuss the matter publicly and spoke on condition of anonymity.

The addition of the federal agents, who will have armored vehicles, came as Barr warned that prosecutors could seek to use terrorism statutes against “violent radical agitators” who attempt to hijack protests to cause destruction.

An antifa activist group disseminated a message in a Telegram channel on Saturday that encouraged people to consider Minnesota National Guard troops “easy targets,” two Defense Department officials said. The message encouraged activists to steal “kit,” meaning the weapons and body armor used by the soldiers. The officials were not authorized to discuss the matter publicly and spoke on condition of anonymity.

As a result, soldiers with the Minnesota National Guard were armed during their mission at protests across the state Sunday, the officials said. The soldiers are sometimes armed but had not been since they moved into parts of the state that had been besieged by riots in the last few days. The troops do not have the authority to make arrests, and are there to act mostly as extra security for police.

Others have seen evidence of right-wing extremists. J.J. MacNab, a fellow at George Washington University’s Program on Extremism, has been monitoring chatter about the protests among anti-government extremists on social media platforms. She has access to dozens of private Facebook groups for followers of the loosely organized “Boogaloo” movement, which uses an ‘80s movie sequel as a code word for a second civil war.

She also has been poring over images from the weekend protests and spotted some “boogaloo bois” in the crowds, carrying high-powered rifles and wearing tactical gear.

“They want to co-opt them in order to start their war. They see themselves as being on the side of protesters and that the protesters themselves are useful in causing anarchy,” MacNab said.

She also sees signs that the Three Percenters militia movement appears to be taking an interest.

Trump was expected in the coming days to draw distinctions between the legitimate anger of peaceful protesters and the unacceptable actions of violent agitators, said a White House official who was not authorized to discuss the plans ahead of time and spoke on condition of anonymity.

The Trump administration has largely remained silent on local reports that far-right protesters were also involved. Meanwhile, Democratic mayors said Trump’s handling of the crisis was reminiscent of one of the darkest moments of his presidency — when he said there were “good people on both sides” of protests in 2017 over white supremacists demonstrating in Charlottesville, Virginia.

America’s racial fault lines are a perfect opportunity for foreign adversaries looking to sow discord and portray the U.S. in a negative light, according to James Ludes, director of the Pell Center for International Relations and Public Policy at Salve Regina University in Rhode Island.

“This is a real issue and Americans are legitimately upset about it,” said Ludes, who studies foreign disinformation tactics. “That’s one of the hallmarks of these campaigns. You don’t create new issues, you exploit existing issues.”

There’s a history of this. In 2016, another black man, Philando Castile, was killed by police in a Minneapolis suburb, his death livestreamed on Facebook. Russians used a fake Black Lives Matter page to confuse and stoke anger among the protesters. There were nearly 700,000 followers, but it’s not clear how many were real.

One debunked example from this week: That Atlanta had deployed a “child militia.”

Floyd was accused of trying to pass a bad bill at a grocery store after he was laid off in the pandemic. Disturbing video showed him prone on the street, while a white police officer pressed his knee into Floyd’s neck even as he cried he couldn’t breathe. He later died. The officers have been fired; Derek Chauvin, the officer who pinned Floyd in the video, was charged with murder.

At first there were peaceful demonstrations, but violence soon erupted. A Minneapolis police station was torched and protests took off around the country, growing increasingly tense. Video showed a police vehicle ramming into demonstrators in New York. Meanwhile, a van with four New York Police Department officers inside was hit with a Molotov cocktail and torched.

Hundreds have been arrested nationwide and cities braced for more protests. But booking information from the county jail in Minneapolis, for example, showed that out of 59 protest-related arrests, 47 people had a home address in Minnesota, with the majority coming from the Twin Cities.

Scouts on bicycles would also move ahead of the groups to report where the police would be and then direct small breakaway groups to areas where they could torch police cars or throw Molotov cocktails, Miller said.

The NYPD has arrested 786 people related to protests since May 28 and 1 in 7 of them were not from New York City, he said.

In Washington, where protesters raged outside the White House, most of the 17 people arrested were from the area. D.C. Mayor Muriel Bowser said the groups seemed, at the least, organized to destroy with tools to break windows and distribute materials.