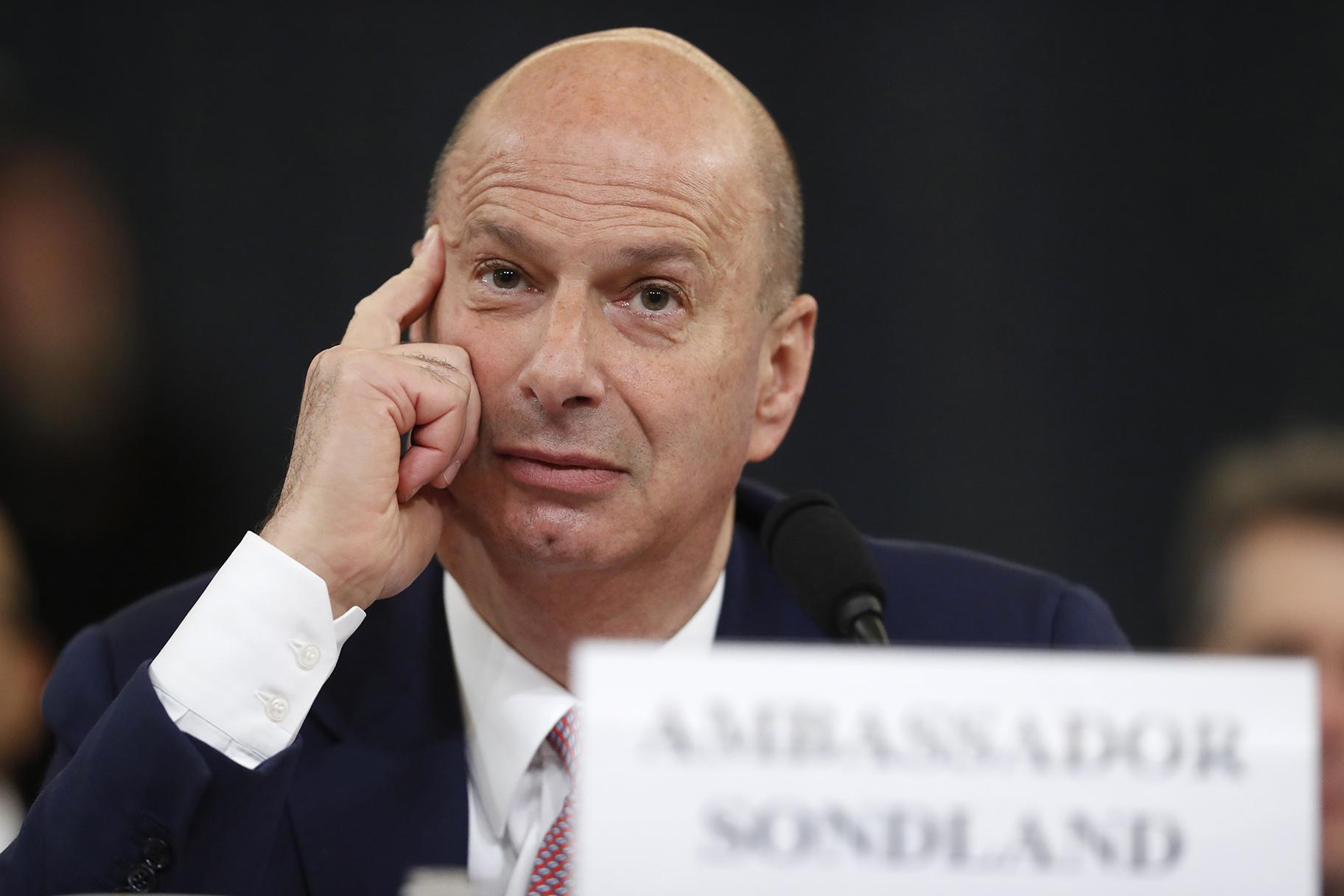 Besides the U.S. offer of a coveted meeting at the White House, Sondland testified it was his understanding the president was holding up nearly $400 million in military aid, which Ukraine badly needed with an aggressive Russia on its border, in exchange for the country’s announcement of the investigations.

Sondland conceded that Trump never told him directly the security assistance was blocked for the probes, a gap in his account that Republicans and the White House seized on as evidence the president did nothing wrong. But the ambassador said his dealings with Giuliani, as well as administration officials, left him with the clear understanding of what was at stake.

“Was there a ‘quid pro quo?’” Sondland asked. “With regard to the requested White House call and White House meeting, the answer is yes.”

The rest, he said, was obvious: “Two plus two equals four.”

Later Wednesday, another witness undercut a main Republican argument — that there could be no quid pro quo because Ukraine didn’t realize the money was being held up. The Defense Department’s Laura Cooper testified that Ukrainian officials started asking about it on July 25, which was the day of Trump’s phone call with the country’s new president when Trump first asked for “a favor.”

Her staff received an email, Cooper said, from a Ukrainian Embassy contact asking “what was going on with Ukraine’s security assistance.” She said she could not say for sure that Ukraine was aware the aid was being withheld but “it’s the recollection of my staff that they likely knew.”

Sondland, the ambassador to the European Union and a major donor to Trump’s inauguration, was the most highly anticipated witness in the House’s impeachment inquiry into the 45th president of the United States.

In often stunning testimony, he painted a picture of a Ukraine pressure campaign that was prompted by Trump himself, orchestrated by Giuliani and well known to other senior officials, including Secretary of State Mike Pompeo. Sondland said he raised his concerns about a quid pro quo for military aid with Vice President Mike Pence — a conversation a Pence adviser vigorously denied.

However, Sondland said, “Everyone was in the loop. It was no secret.”

The ambassador said that he and Trump spoke directly about desired investigations, including a colorful cellphone call this summer overheard by others at a restaurant in Kyiv.

Trump himself insists daily that he did nothing wrong and the Democrats are just trying to drum him out of office.

As the hearing proceeded, he spoke to reporters outside the White House. Reading from notes written with a black marker, Trump quoted Sondland quoting Trump to say the president wanted nothing from the Ukrainians and did not seek a quid pro quo.

“I want nothing, I want nothing,” insisted the president, who often exhorts Americans to “read the transcript” of the July phone call in which he appealed to Ukraine’s leader for “a favor” — the investigations.

He also distanced himself from his hand-picked ambassador, saying he didn’t know him “very well.” A month ago, he called Sondland “a really good man and a great American.”

The impeachment inquiry focuses significantly on allegations that Trump sought investigations of former Vice President Joe Biden and his son -- and the discredited idea that Ukraine rather than Russia interfered in the 2016 U.S. election -- in return for the badly needed military aid for Ukraine and the White House visit.

In Moscow on Wednesday, Russian President Vladimir Putin said he was pleased that the “political battles” in Washington had overtaken the Russia allegations, which are supported by the U.S. intelligence agencies.

“Thank God,” Putin said, “no one is accusing us of interfering in the U.S. elections anymore. Now they’re accusing Ukraine.”

Sondland said that conditions on any potential Ukraine meeting at the White House started as “generic” but more items were “added to the menu including -- Burisma and 2016 election meddling.” Burisma is the Ukrainian gas company where Biden’s son Hunter served on the board. And, he added, “the server,” the hacked Democratic computer system.

During questioning in the daylong session, Sondland said he didn’t know at the time that Burisma was linked to the Bidens but today knows “exactly what it means.” He and other diplomats didn’t want to work with Giuliani. But he and the others understood that Giuliani “was expressing the desires of the president of the United States, and we knew that these investigations were important to the president.”

He also came to understand that the military aid hinged on the investigations, though Trump never told him so directly.

Sondland, a wealthy hotelier, has emerged as a central figure in an intense week in the probe that is featuring nine witnesses testifying over three days.

The envoy appeared prepared to fend off scrutiny over the way his testimony has shifted in closed-door settings, saying “my memory has not been perfect.” He said the State Department left him without access to emails, call records and other documents he needed in the inquiry. Republicans called his account “the trifecta of unreliability.”

Still, he did produce new emails and text messages to bolster his assertion that others in the administration were aware of the investigations he was pursuing for Trump from Ukraine.

Sondland insisted, twice, that he was “adamantly opposed to any suspension of aid” for Ukraine. “I followed the directions of the president.”

The son of immigrants who he said escaped Europe during the Holocaust, Sondland described himself as a “lifelong Republican” who has worked with officials from both parties, including Biden.

Dubbed one of the “three amigos” pursuing Ukraine policy, Sondland disputed that they were running some sort of “rogue” operation outside official U.S. policy. He produced emails and texts showing he, former special envoy Kurt Volker and Energy Secretary Rick Perry kept Pompeo and others apprised of their activity. One message from Volker said, “Spoke w Rudy per guidance from S.” He said, “S means the secretary of state.”

Democratic Intelligence Committee Chairman Adam Schiff of California said, “The knowledge of this scheme was far and wide.”

Schiff warned Pompeo and other administration officials who are refusing to turn over documents and testimony to the committee “they do so at their own peril.” He said obstruction of Congress was included in articles of impeachment during Watergate.

The top Republican on the committee, Devin Nunes of California, decried the inquiry and told the ambassador, “Mr. Sondland, you are here to be smeared.”

Nunes renewed his demand to hear from the still-anonymous whistleblower whose complaint about Trump’s July 25 phone call with Ukraine President Volodymyr Zelenskiy led the House to open the impeachment inquiry.

Sondland’s hours of testimony didn’t appear to sway Trump’s GOP allies in the Senate, who would ultimately be jurors in an impeachment trial.

Mike Braun of Indiana said the president’s actions “may not be appropriate, but this is the question: Does it rise to the level of impeachment? And it’s a totally different issue and none of this has.”