In case you hadn’t heard, there’s an alligator floating around the lagoon in Humboldt Park. Authorities are still trying to catch the elusive beast; their search is now in its third day.

Hundreds of onlookers have reportedly stopped by to catch a glimpse of the gator, which is thought to be about 4 or 5 feet long (i.e., too large to keep as a pet). And while officials have not been able to say how the creature got into the lagoon, the prevailing theory is that someone was raising the alligator as a pet and released it once it got too big to care for.

As social media continues to go gaga over the search, we’re here to whet your appetite for information about one of the most fearsome reptiles out there.

Here are 10 things to know about alligators. 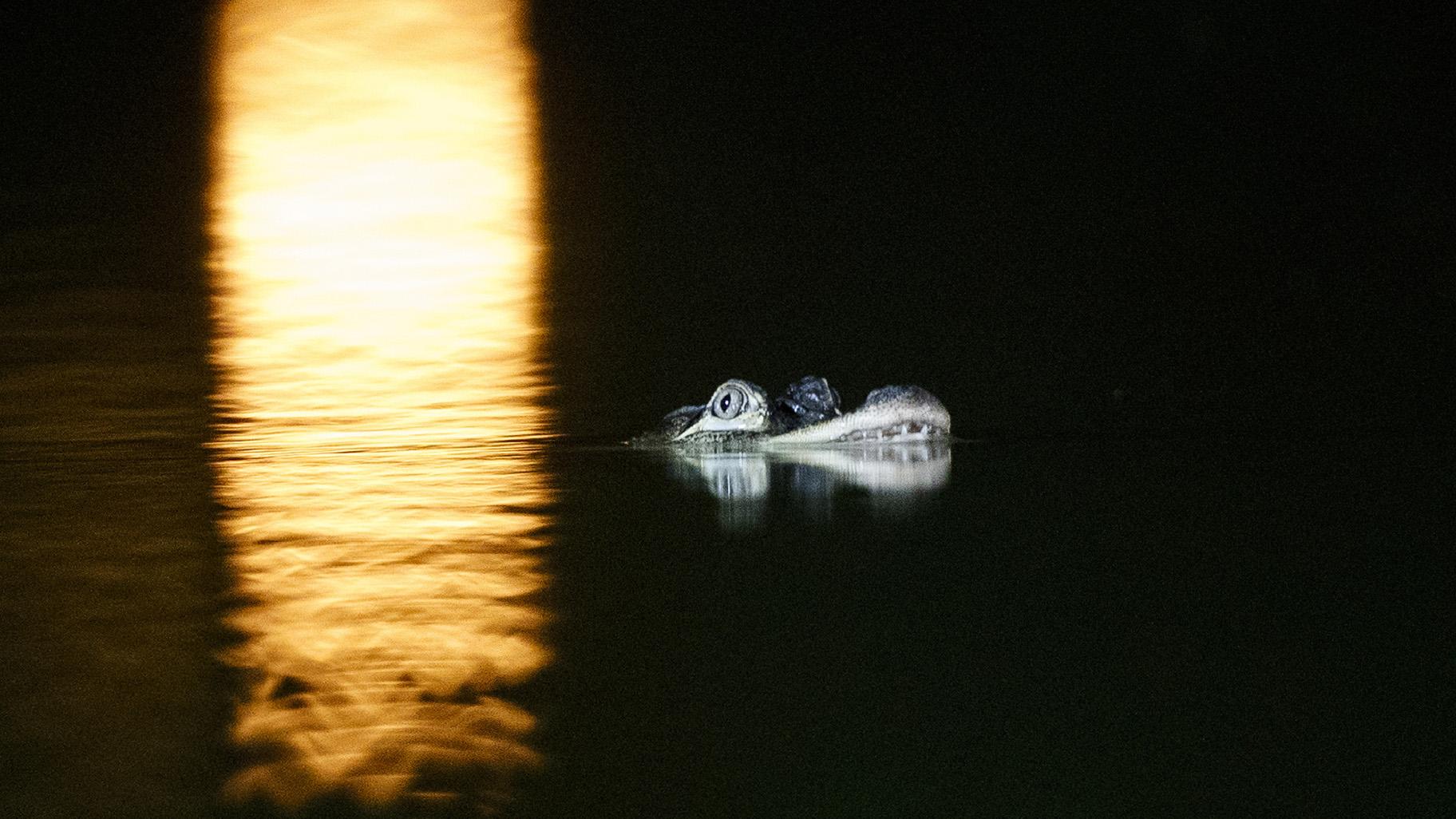 An alligator floats in the Humboldt Park Lagoon on Tuesday, July 9, 2019, in Chicago. Officials couldn’t say how the creature got there, but traps are being placed around the lagoon in hopes the animal will swim into one and be safely removed. (Armando L. Sanchez / Chicago Tribune via AP)

1. Owning an alligator is illegal in Illinois

On the chance that you’re considering a gator as a pet, don’t do it.

State law prohibits individuals from owning any “dangerous animal” except for those kept at a zoo, research lab, veterinary hospital, animal refuge or federally licensed exhibit.

Owning an alligator is legal in some states, though. According to Born Free USA, a national animal advocacy nonprofit, five states have no license or permit requirements regulating the ownership of exotic pets. The group includes Alabama, Nevada, South Carolina and Wisconsin.

Some other states, such as Florida, allow individuals to own alligators and other exotic wildlife but require licenses and permits.

2. Alligators are tiny at birth but they get big. Really big. 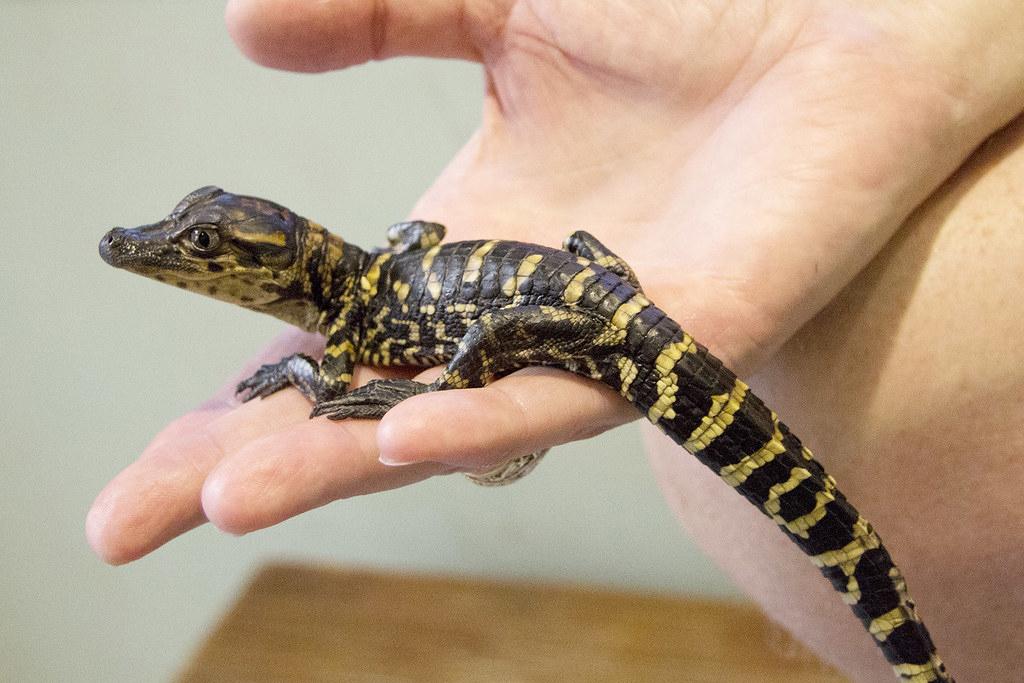 Baby alligators, like most baby animals, are really cute. When they hatch, they’re less than a foot in length, but that small size is temporary.

Adults alligators would, if they had the ability to stand upright, tower over the tallest NBA player: females reach an average length of just over 8 feet, while males reach lengths greater than 11 feet.

This is another really good reason why you should not choose an alligator as your next pet – even if you live in a state where it’s legal to own one. (And if you’re still unconvinced, read on.)

3. Alligator attacks are three times as deadly as shark attacks 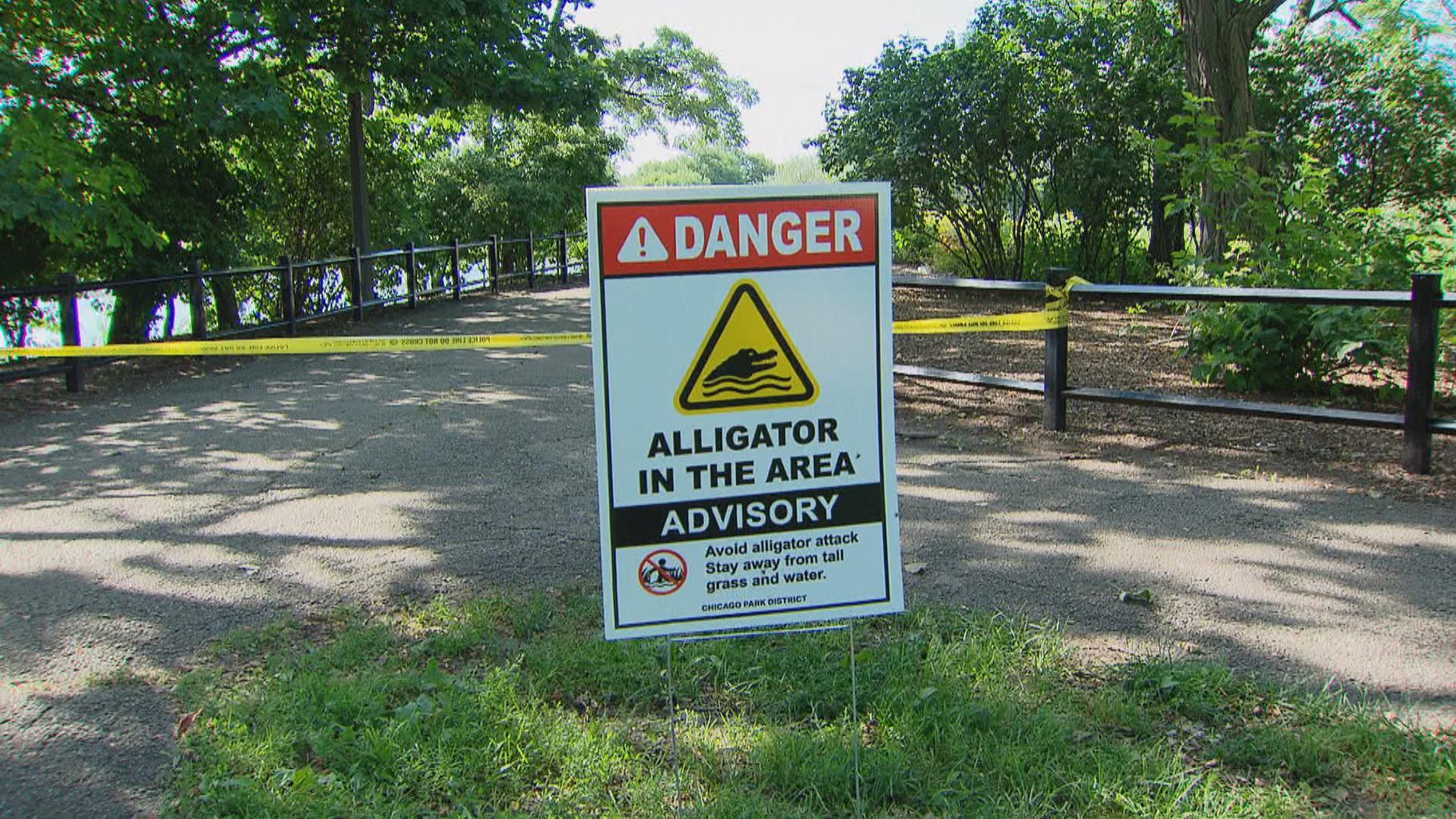 A sign at Humboldt Park warns visitors about the alligator discovered in the park’s lagoon. (WTTW News)

Just last year, a 45-year-old elementary school teacher in South Carolina was killed by a 9-foot alligator while trying to protect her dog.

Although alligator attacks are rare, they can be quite serious when they do happen.

In Florida, which has the highest number of human-alligator interactions, there have been 24 deadly alligator attacks since 1948, with the majority coming in the past 20 years.

Attacks by alligators are nearly three times as deadly as shark attacks, according to data compiled by the Florida Museum of Natural History. The museum found that more than 4% of alligator attacks result in death, while just 1.5% of shark attacks are fatal.

American alligators, which live in the wetlands of the southern U.S., were at one time hunted to the point at which experts thought the species would never recover.

The reptile’s fortunes began to change after a law passed in 1967 listed the alligator as endangered. Six years later, the passage of the Endangered Species Act boosted efforts to save the animal by prohibiting alligator hunting – gators are hunted mainly for their meat and skin, which is used in alligator leather products – allowing the species to rebound in many areas where it had been depleted, according to the U.S. Fish and Wildlife Service.

In 1987, USFWS pronounced that American alligators had completed a full recovery and removed the species from the endangered list.

Alligators possess a keen sense of hearing, allowing them to accurately pinpoint the source of sounds.

How they do it was unclear until a 2014 study that linked the skill to large, air-filled channels connecting the creature’s ears.

The Humboldt Park Lagoon alligator has been hearing plenty of different noises this week, including a drone that’s looking for the gator and a salsa festival held at the park on Wednesday. 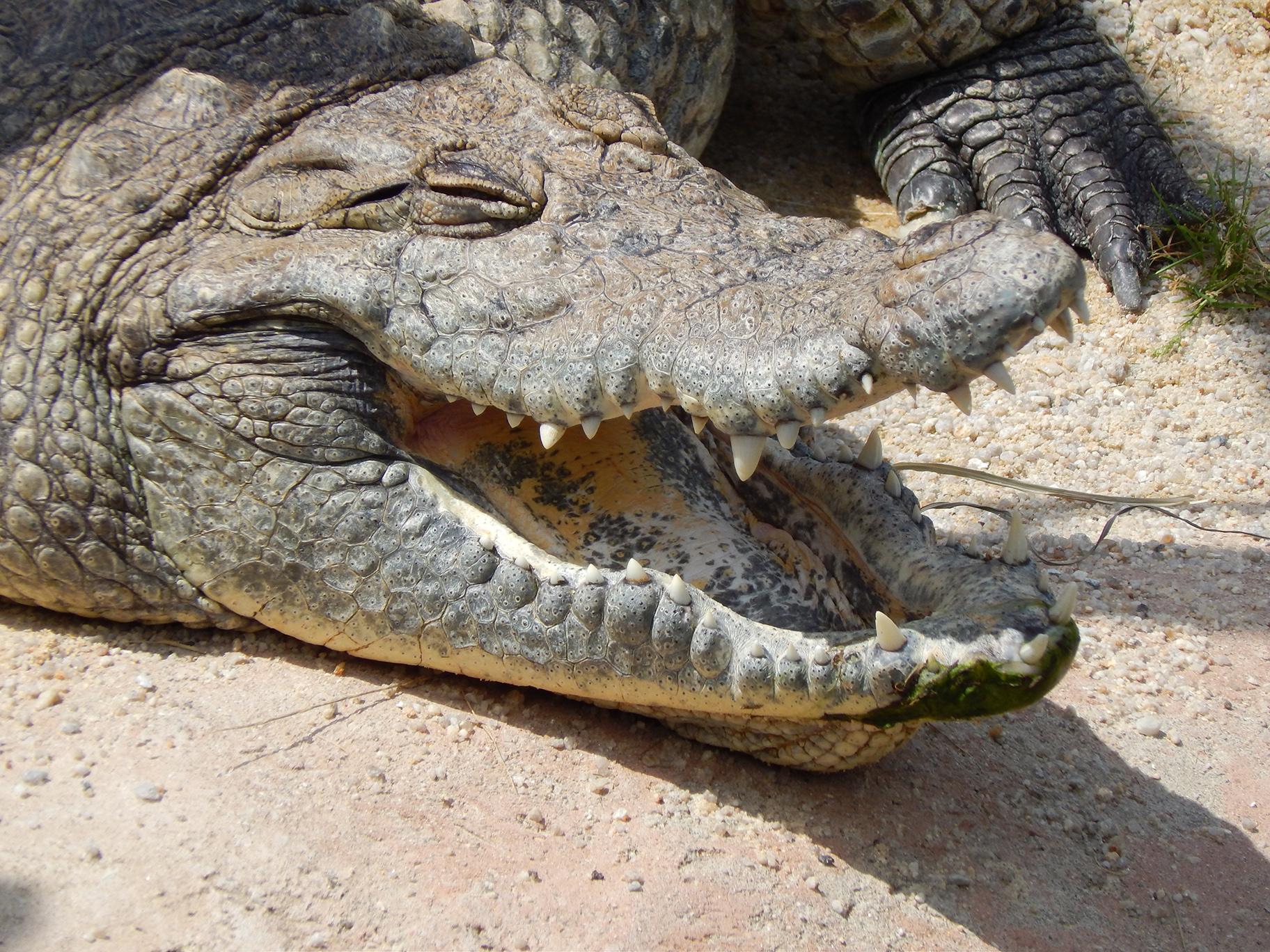 How can you tell an alligator from a crocodile? Look at their teeth.

When their snouts are closed, crocodiles look like they’re showing a toothy grin, which is caused by a large tooth on each side of the lower jaw that sticks up over the animal’s upper lip.

Alligators, meanwhile, have a wider upper jaw than the lower one. When an alligator’s snout is shut, all of its teeth are hidden.

Although only some are visible, alligators have up to 80 teeth in their mouth at a time. As the teeth wear down, they get replaced with new ones. Over an alligator’s life, it can go through a whopping 3,000 teeth.

7. The sex of baby alligators is determined by the temperature of the eggs 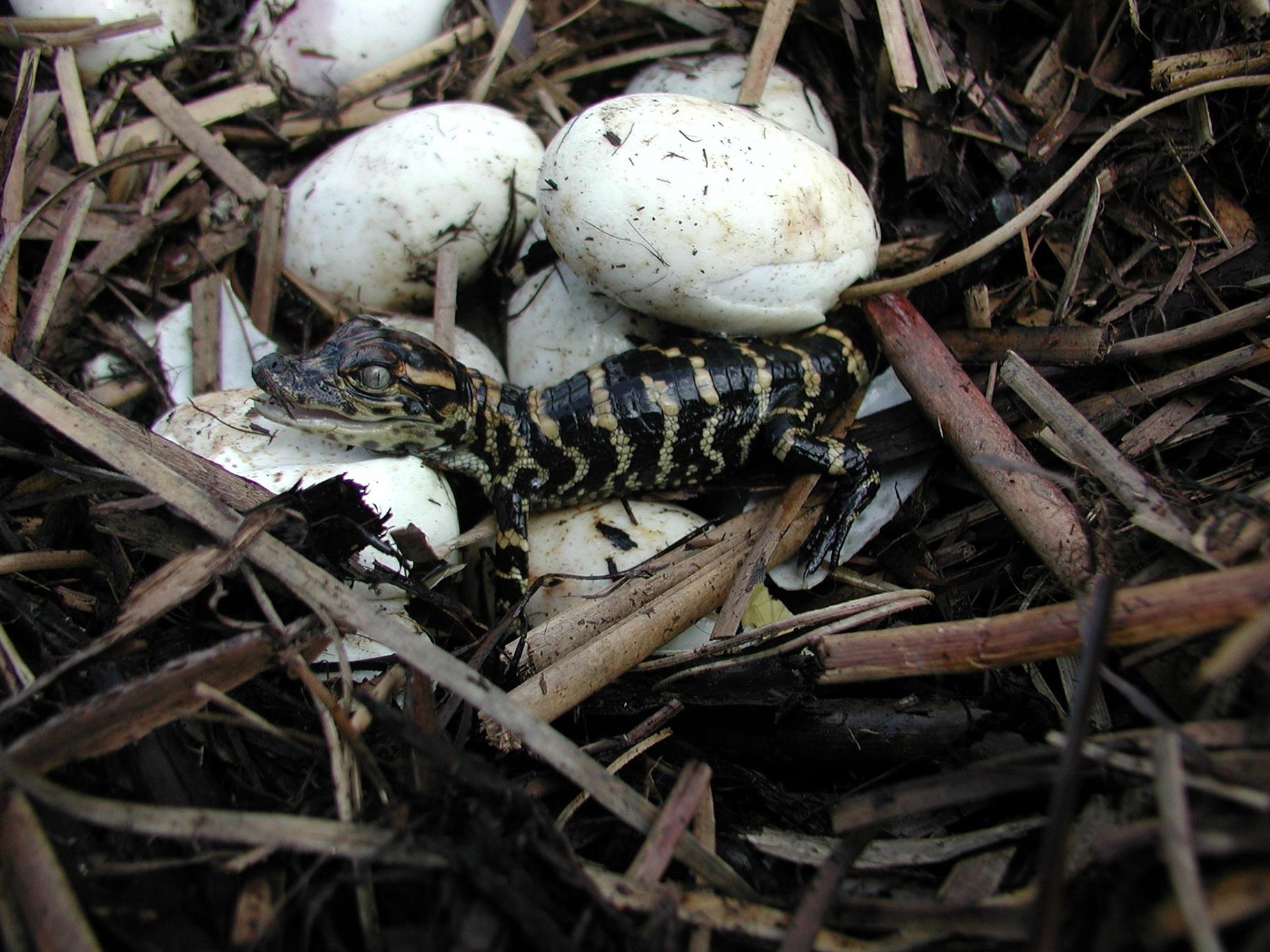 Where an alligator decides to lay a nest plays a major factor in whether its offspring will be male or female.

Because alligators lack sex-determined chromosomes, the temperature at which they are hatched almost always determines their gender. Therefore, whether an alligator lays a nest along a river in the sunlight or in a cooler, shade-covered spot can make a big difference.

According to the Smithstonian’s National Zoo and Conservation Biology Institute, alligator eggs hatched at temperatures of about 86 degrees Fahrenheit are mostly female, while eggs incubated at about 91 degrees Fahrenheit produce primarily males.

8. Alligator bites pack force equal to the weight of a small pickup truck

As if you needed another reason to steer clear of these ferocious creatures, consider this: Studies have documented alligator bites that have nearly 3,000 pounds of force, which is one of the most powerful bites ever recorded from a living animal.

In fact, the power behind a larger alligator’s bite is roughly equal to the weight of a small pickup truck. 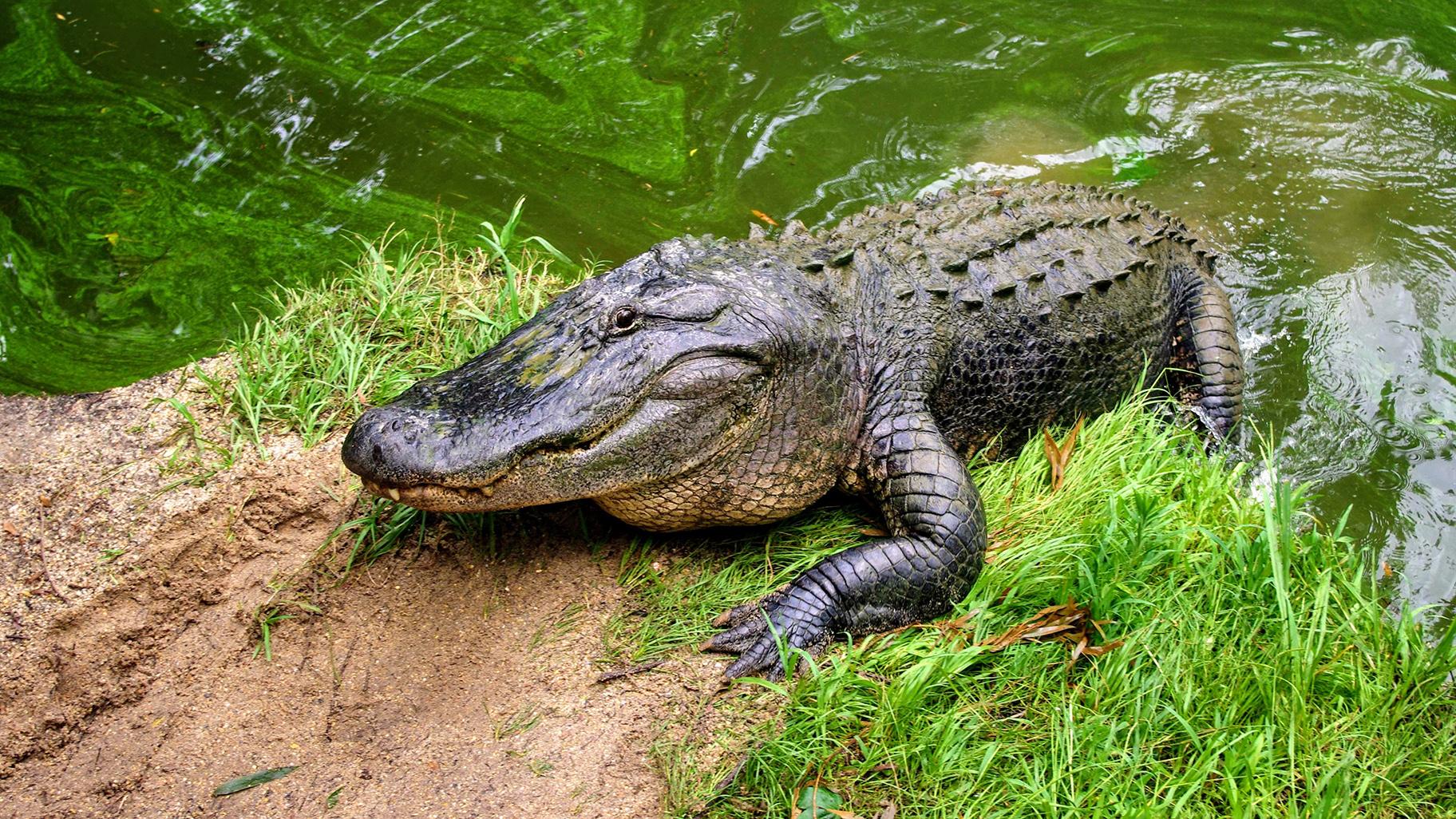 Even young alligators can pack away some heavy meals.

Juvenile gators are capable of eating nearly a fourth of their body weight in one sitting. For comparison, that’s equivalent to a 200-pound human eating 50 pounds worth of steak (or whatever dish you prefer) for dinner.

How do they do it? Alligators have a special blood vessel that enables them to shunt blood away from their lungs and toward their stomach, which produces strong acids to break down food faster.

In addition to the protective bony armor found in their skin, alligators are equipped with a high-octane immune system.

A 2008 study by scientists in Louisiana found that blood from American alligators destroyed 23 different strains of bacteria. The scientists concluded that protein fragments known as peptides within alligator blood aid the animals in staving off what could be fatal infections, allowing alligators to carry on even after losing a limb, for example. 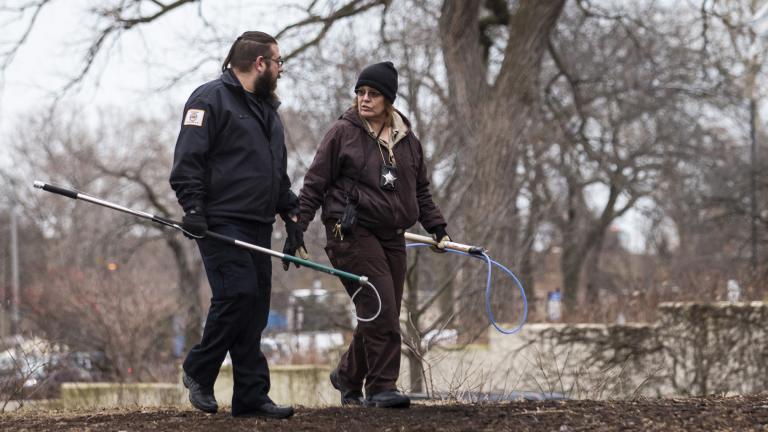 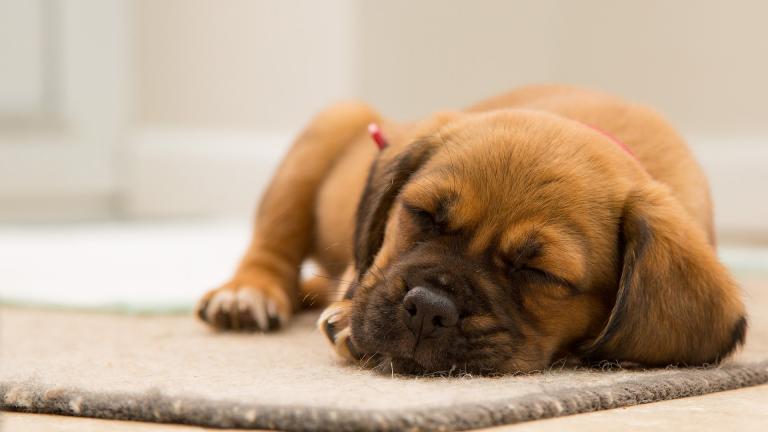