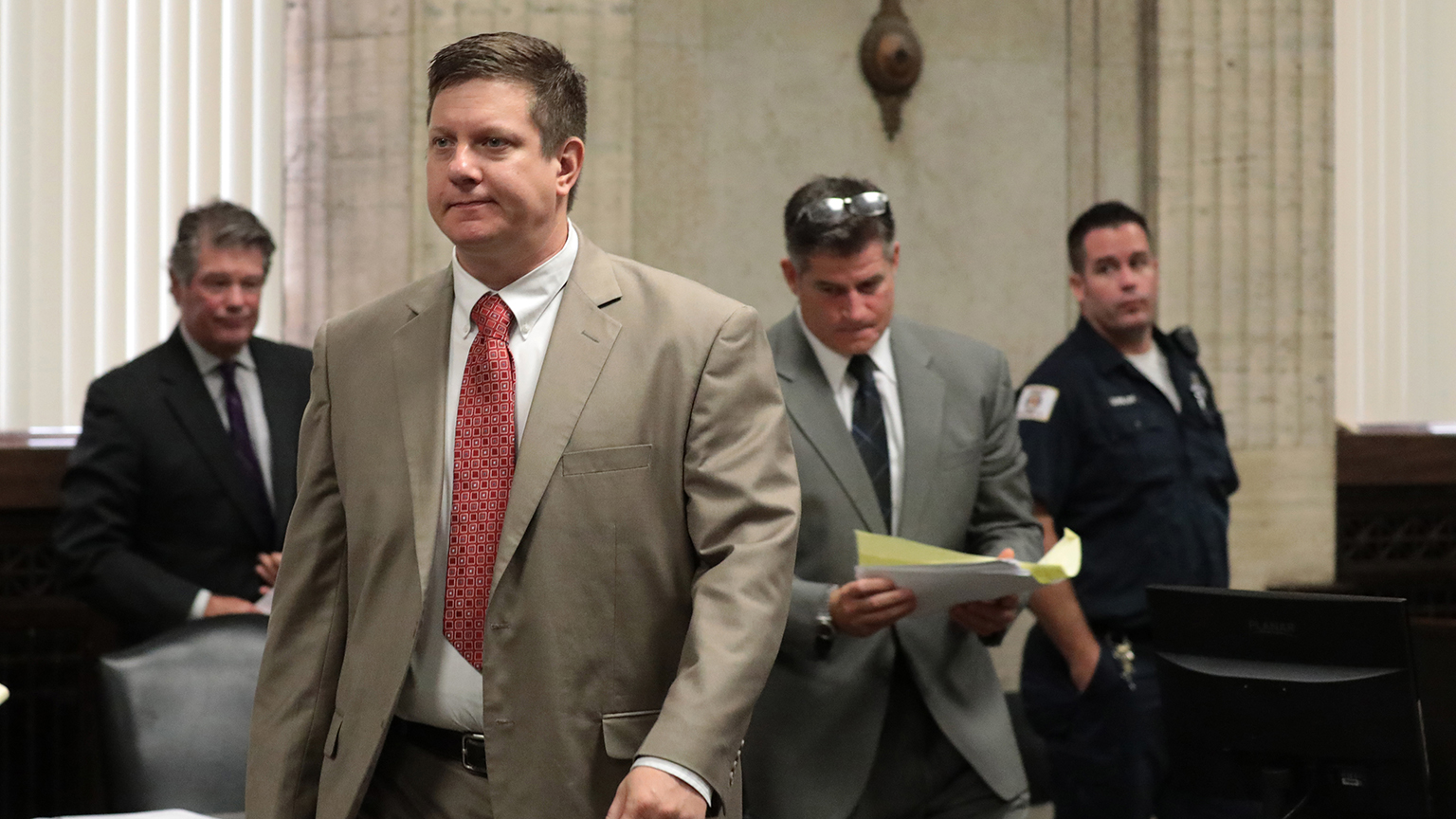 Chicago police Officer Jason Van Dyke walks over to the judge's bench at the start of the hearing on the shooting death of Laquan McDonald, at the Leighton Criminal Court Building Monday, Aug. 20, 2018. (Antonio Perez / Chicago Tribune / Pool)

A Cook County judge will wait to decide whether Chicago police Officer Jason Van Dyke violated his bond by giving on-the-record interviews with local media on the eve of his upcoming trial for the killing of teenager Laquan McDonald.

Judge Vincent Gaughan issued no rulings during a rare Saturday court appearance, opting instead to rule on a request to revoke Van Dyke's bond next week.

Special prosecutors say Van Dyke “engaged in conduct calculated to embarrass, hinder, or obstruct the court in its administration of justice” in recent interviews with the Chicago Tribune and Fox 32.

But speaking out, prosecutors claim Van Dyke violated the terms of his bail and Gaughan's 2016 decorum order, which forbids attorneys or Van Dyke himself from speaking substantively about details of the case in public. They filed motions Thursday asking Gaughan to revoke Van Dyke’s bond and accusing him of indirect criminal contempt of court.

Van Dyke’s attorneys have called the prosecutors' motion an “egregious abuse of power” and claim their client was only trying to exercise his First Amendment rights by speaking out. Defense attorney Daniel Herbert called the idea of a so-called "media blitz" preposterous, arguing his client has been the subject of thousands of negative media stories since he was charged.

Herbert has previously referred to the media attention as a compelling reason to move the trial out of Cook County. He said his client did the interviews because he is scared for his own safety and wanted a chance to tell his side of the story.

Gaughan has tried to keep a tight lid on the high-profile case, saying it’s a necessary precaution to ensure a fair trial. He previously required all motions to be filed in his chambers and regularly holds informal case management conferences with attorneys behind closed doors and away from the eyes of the public and media.

Van Dyke is charged with first-degree murder after shooting McDonald 16 times as the youth walked down the center of South Pulaski Road carrying a knife in October 2014. He also faces 16 counts of aggravated battery and one count of official misconduct.