Community residents liked what they heard about plans to improve the lakefront along the Morgan Shoal on the city’s south side. 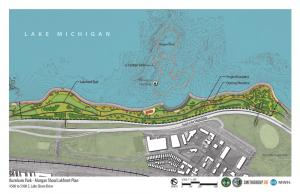 The Morgan Shoal is a unique geological formation where dolomite bedrock has thrust up and forms the lake’s bottom. This type of rock formation is found nowhere else in the Great Lakes. The shoal is home to fishes and aquatic plant life that makes for great snorkeling and swimming. 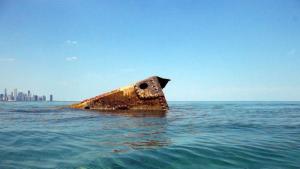 Morgan Shoal is also where a shipwreck on a Great Lakes shoreline can be found. The Silver Spray got caught on the Morgan Shoal on July 15, 1914. Today, the boiler sticks up out of the water and the propeller and propeller blades can be found resting on the shoal.

Initial proposals from the Chicago Park District in 2004, and again last November, would have added 30 acres to the shoreline between 45th and 51st, and completely covered the shoal and the Silver Spray shipwreck.

The community objected and last night’s plans were completely different.

These plans add seven acres of new land which extends the shoreline but does not include any landfill or structures that would cover the shoal. The enhanced shoreline would include native savanna prairie landscape, a new walking path closer to the water, picnic areas, and a comfort station.

The shoreline protection structure would reach 14 feet high and be composed of large rocks. That height worried some residents who feared lake views would be restricted from the bike path and from Lake Shore Drive.

"Most people see the lake from their cars," said Hyde Park resident Robin Kaufman. “I'd hate to see that view blocked."

The lakefront protection structure would be lower at Pebble Beach. The ever-changing pebbles are bounced across the shoal and pushed up onto the shore making a unique beach which provides good access to the water for swimmers and snorkelers. The limestone steps leading down to the beach would be 12 feet high. 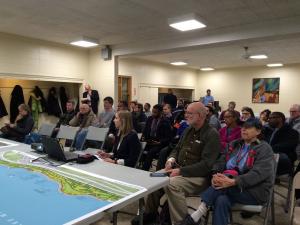 Greg Lane guides swimmers on tours of the Shoal and the Silver Spray off Pebble Beach in the summer. He would like to see the concept of the park expanded to include the water.

"We could create an underwater park by barring motorized vehicles within half a mile of the shoreline from 31st to 57th Street. This would create a protected area that would allow swimmers, snorkelers, kayakers, canoeists, and other non-motorized boat owners a unique sanctuary that doesn't exist anywhere else along the lakefront,” he said.